The Dart: Bluegrass brings people together in Gold Hill 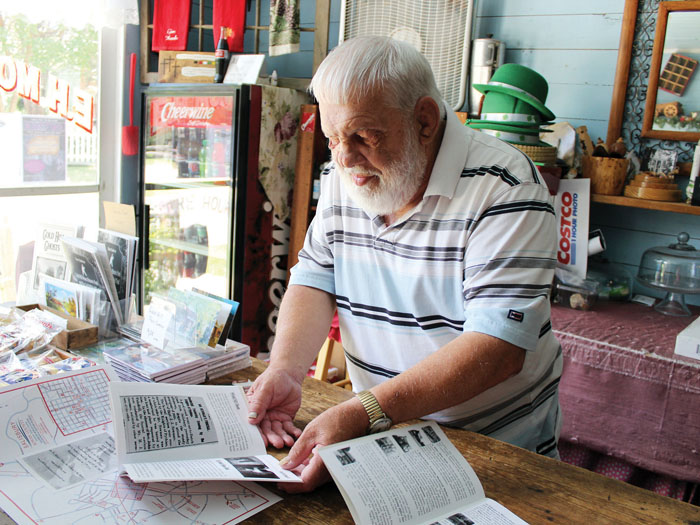 GOLD HILL — If you ever find yourself throwing a dart at a Rowan County map only for it to land on Gold Hill, you can be certain of two things. One, you probably need to work on your aim, because you’ve almost missed the county altogether. Two, if you’re following the dart for a place to explore, you’re in for something magical.

Magical may seem an odd choice of adjective for this sleepy little town, but that’s how it feels. A short drive, a few twists and turns in the car, and you’ve escaped the hustle and bustle of modern day society for that slower, neighborly era of yesteryear.

The Historic Village of Gold Hill, as it is known, boasts a myriad of attractions dating back to the middle of the 19th century. Mine shafts reflect the origins of the village’s name, and a cluster of storefronts have elected to forego modernization. As such, the experience of walking through the small town is like stepping back into the past.

One of these stores is the E. H. Montgomery General Store, which itself houses another treasure of Gold Hill besides rustic and weathered wood and sturdy architectural sites now celebrating their dodransbicentennial (that is, their 175th year in existence, if you’re counting). Specifically, it’s the site of weekly, old-fashioned bluegrass ‘picking’ sessions, hosted every Friday night at 7 p.m.

Glenn “Hoppy” Hopkins represents one half of the duo now leasing the General Store. His wife, Vivian, is the other half and, by his accounts, she’s a very busy woman: an author, painter, historian and bluegrass musician.

Bluegrass, it seems, would be the shared passion that brought the pair together.

“Her daddy found out that I loved bluegrass,” he said. “She loved dancing and bluegrass. She was a clogger. He took me and (her family) to a festival and I had a ball. That’s the way we met.”

This is how much of the conversation with Hopkins will flow. He’s straight to the point, yet still has a way of regaling those who listen with anecdotes and Gold Hill history in a way that only a natural-borne grandfather-type can.

Much like his story of meeting his wife, Hopkins describes the process of coming to lease the store as something that simply fell into place. He was working two jobs when, at 48, he had to undergo major surgery.

Hopkins recommends plenty to those yet uninitiated with Gold Hill: renting a cottage for example, or exploring the Gold Hill Mines Historic Park. Unsurprising is his emphasis on visiting during one of those Friday night jam sessions, a spontaneous and collective musical events that sometimes spills out of the storefront and into the street.

Participants are of all ages and join them weekly from places like Concord and Wilkes County. Hopkins reports that support for the event is apparent: some pickers not only play along, but help set up for the sessions as well.

“It’s just a family, you know? That’s what bluegrass is, it’s a family.”