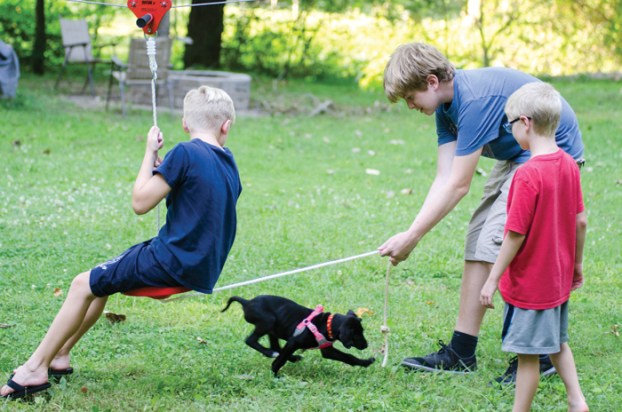 KRISTI CRAVEN/ SALISBURY POST Tony Frank, 10, left, and his brothers Matt, 14, middle and Nick, 7, watch as their puppy Guinness chases the rope for the zipline that their family built in the backyard in Salisbury on June 29, 2017.

Zippin’ around: Family builds zip line in their backyard

Chris and Lynn Frank racked their brains to come up with a plan to get their four boys off their electronic devices and outside this summer. What they came up with was a zip line.

Since last weekend, the boys — and their dad, too — have had a ball with their new toy.

“Nick goes the fastest because he’s the lightest,” says Lynn — who conveniently happens to be wearing a skirt this particular summer evening.

As the parents of four boys who’ve had their share of mishaps — “We’ve had some broken bones and stitches, does that count as major?” Chris asks — the Franks wanted to make the device as safe as possible. First off, there’s no platform from which to jump. The brothers or Dad haul one another up to the top of the 90-foot line.

“You have to have a buddy,” Lynn points out.

It doesn’t have a very steep decline, but it’s fast enough. Tony flies across the yard when it’s his turn.

“Put your feet out!” Lynn yells, so Tony won’t slam into the tree at the bottom of the run.

So … whose idea was this?

“Oh gosh, the kids have been asking for it since we moved in,” says Lynn. The family has lived in Country Club Hills for the past 18 months. “We did a lot of research, and injuries tend to occur at the point of embarkation. We wanted to put the zip line at the top of our winding stairs, but look how high that is!”

So they settled for two of the tall and sturdy trees in their massive backyard. There’s lots to do here. Ethan recently made stilts in his industrial design class at Christ the King Catholic School in Huntersville, where he and Matt will attend in the fall. Tony and Nick are students at Sacred Heart Catholic School, where Lynn will teach fifth grade this fall, and where the family attends church. The family relocated to Salisbury from Mooresville, where Chris works in IT with Lowe’s.

“We moved to Salisbury for this parish and this community,” Lynn says.

She then shifts her attention to watch Ethan stalk around the backyard on his stilts.

“Ethan has a future in the circus,” she says, laughing. “But it’s a regular circus back here … it kinda is.”

In addition to the zip line and Nathan’s stilts, there are six angled platforms which the boys can run across —American Ninja Warrior-style. Someone made these pallets for the Tigers Scout group, but the letters are always out of order, Chris says. At present, it’s I-R-T-S-E-G.

There’s also a basketball goal and a “lacrosse wall,” a 3-foot square mesh rebounding target that’s way better than the side of the house.

“That’s cheaper than a new window,” Lynn notes. “I priced it out.”

For rare down time, two hammocks are strung between the numerous trees. To add to the excitement, the family also has a new puppy. Guinness is a black Labrador retriever. And, hooray for Lynn, she’s a female.

So, along with riding bikes, hiking, and trips to the pool, there’s a lot of outdoor fun for the boys this summer.

“We’re both from Indiana,” Lynn says, “and three of our four boys were born there. We don’t have mountains up there like y’all do here. That’s what we love about being here. It’s great. We like to hike and be outside as much as possible.”

Chris and Lynn continue to work to minimize the boys’ screen time. They have chores around the house to complete before heading out to the zip line.

“Boys have to be physical,” Lynn says. “If you don’t give them the opportunity to do ‘reckless’ things, they’re gonna go out and do it.”

Speaking of which, the family has a basket full of Nerf guns and other equipment — and an endless supply of Nerf bullets. Well, OK … 600. Last fall, Tony hurt his eye when he was hit at close range. Now Lynn makes sure everyone in the house dons protective eyewear during Nerf battles. She even gave a pair to an electrician who was working there recently.

“We try to be as safe as possible,” Lynn says. “But you don’t have this many boys in the house without being tough.”

With a nod to safety, the overall goal for summer still is getting the kids outside and having fun, Chris and Lynn say.

Which suits Ott and Julie Pinkston just fine. They’ve absolutely loved watching the boys have fun on the zip line the past several days.

“Although we have enjoyed their company and the four boys since their arrival, we think this helps bring our older neighborhood to life,” Julie says. “Ott and I are sandwiched between Ben and Kelly Goodman and their children, Sam and Anna Kate, whom we adore, and the Frank family, whom we also adore. Life is good in Country Club Hills.”

Foster’s BBQ and Grill in the 5500 block of U.S. 601 was heavily damaged Friday by a fire believed to... read more