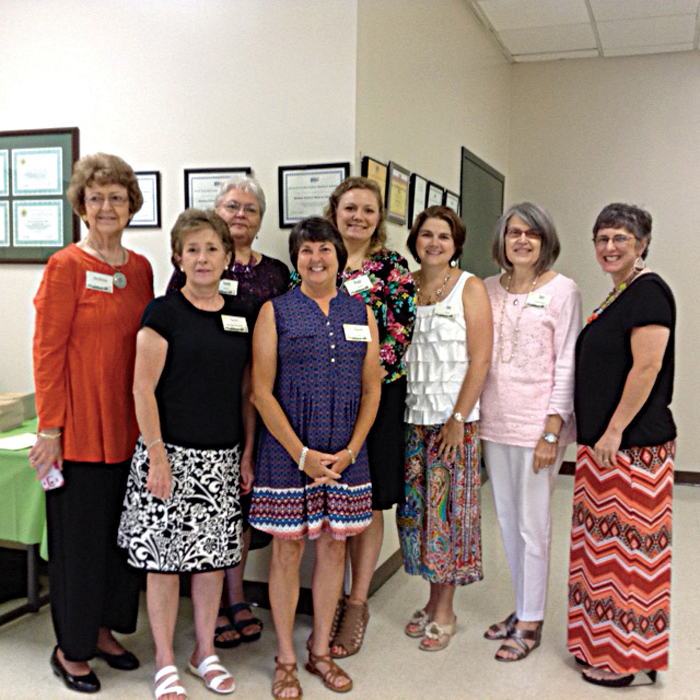 Jeannie Patterson, director of the leadership team, explains the purpose of the group is to facilitate both missions and ministry in not just our county, but our state, our nation and abroad.

“Knowing the role of a pastor’s wife is always challenging and often stressful, our ladies wanted to honor the pastors’ wives with a meal, some gifts, and a speaker just for them.

“In fact, Mrs. Betsy McSwain, formerly the pastor’s wife at Dunn’s Mountain Baptist Church and now the Women’s Missionary Union statewide ministry consultant for wives of Baptist clergy, brought a program on resources available to help the wives maximize their talents in their unique role.”

The Baptist Women’s Leadership Team hopes to make this luncheon an annual event for the RSBA pastors’ wives.

To commemorate the 500th anniversary of Martin Luther’s nailing of the 95 theses on the door of Wittenberg Church the descendants of Conrad and Mary Sloop, 18th century settlers of Rowan County, NC will hold a reunion Saturday, July 22, 2017 at Lutheran Chapel Church, 135 Eudy Road, in China Grove, NC  28083.
Registration will begin at 10 a.m., the worship service at 11 a.m., lunch at noon and a business meeting at 1 p.m. Those attending are asked to bring a potluck lunch and beverage. Most, if not all Sloops in North Carolina can trace their ancestry back to Conrad and Mary; thus anyone with the last name Sloop or who is a descendant of someone with the last name Sloop is encouraged to attend the reunion.
The original spelling of the family name was Schlup; however, during Conrad and Mary’s lifetime it was anglicized to Sloop.

‘Bluecoats in Concord: the Untold Story’

KANNAPOLIS — Kannapolis History Associates asks: Are you familiar with President Jefferson Davis’s journey to and through the South? Did you know that the Union Army was at one point in Concord? On Monday, July 10 learn more as Bill Hallman shares a chapter of local history involving the presence of the Union Army in Concord and surrounding areas.

North Carolina Museum of History, Mint Museum, Charlotte Museum of History, Old Salem and Reynolda House are just a few of the more than 2,000 museums across America to offer free admission to military personnel and their families this summer, Memorial Day through Labor Day, in collaboration with the National Endowment for the Arts, Blue Star Families and the Department of Defense.

A full list of participating museums is available at arts.gov/bluestarmuseums

MIDLAND — Representatives from the Charlotte Coin Club will provide a free lecture regarding the use of gold as currency, with notes on the Bechtler mint and the history and output of the Charlotte mint on Saturday, July 15 at 1 p.m.

Most people are familiar with gold today through jewelry and special collector minted coins for investment purposes.

What people may not realize is the importance of gold to the monetary system of the United States from Colonial times through the 1930s. When the country was formed in the 1780s, foreign gold coins were freely traded for goods and services, since the denomination was stamped into the coin, and the value of gold was a set constant for trading or investment.

The United States Mint authorized gold coins to be made, in denominations of $1 to $20, at Philadelphia and other branch mints as they were opened in the gold producing regions.

North Carolina gold was the only gold used at Philadelphia from 1804-1827, showing the significance of this region. The first documented discovery of gold in the United States happened on John Reed’s farm in present day Cabarrus County.

Due to the amount of gold found in North Carolina, Christopher Bechtler began minting his own gold coins in Rutherfordton by the 1830s. Private mints flourished since gold coins were not easily accessible during this time in the south. A branch of the U.S. Mint was finally opened in 1837, producing coins until the Civil War began in 1861.

Gold coins continued to be issued by the U.S. Mint through the late 1800s and early 1900s. The final year for gold coins was 1933, which comprised the $10 Indian Head Eagle and Saint Gaudens $20 Double Eagle (though most of these coins were never released to the public). Franklin Delano Roosevelt, through Executive Order 6102, removed all gold coin and bullion from private hands, and eventually for backing paper money issued by the Federal Reserve Bank during 1933. The value of gold was also fixed at $35 per troy ounce, which stayed until gold could be privately owned again during the 1970s.

Paper money was also backed by gold, with Gold Certificates and early issues of the Federal Reserve Bank stating that fact on the notes. These were taken out of circulation in 1933, replaced with silver until the 1960s.

This free lecture is open for all those interested in numismatics and/or gold currency. Registration is encouraged but not required. RSVP at reed@ncdcr.gov by July 14.