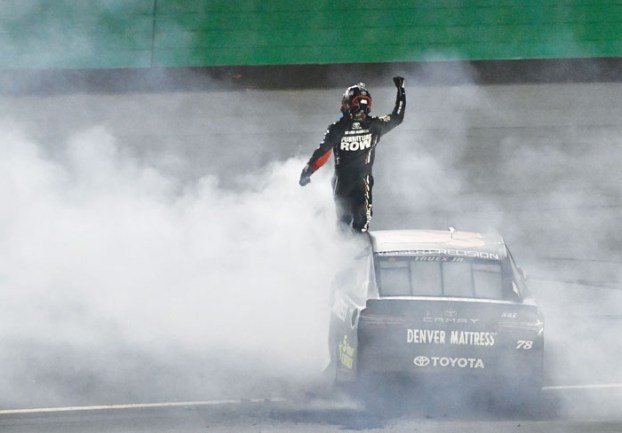 SPARTA, Ky. (AP) — Martin Truex Jr. was dominant throughout and had enough left on a final restart to win the NASCAR Cup race Saturday night at Kentucky Speedway.

Second in points entering the 400-mile event, Truex started second beside Kyle Busch and won the first two stages. Truex led the final segment by as many as 15 seconds before a final caution created overtime and bunched the field together.

That made no difference as Truex flew past Busch on the restart and went on to his third victory of the season and 10th of his career. He led five times for 152 of 274 laps in the No. 78 Toyota to draw within a point of standings leader Kyle Larson, who finished second in a Chevy.

Chase Elliott was third in a Chevy, followed by Denny Hamlin and Busch in Toyotas. Busch led 112 laps, but fell short of his third Kentucky victory.

Then again, Truex wasn’t inclined to let anyone get close in earning his first Kentucky triumph.

Pole winner Busch pounced right away and led the first 66 laps but often had Truex close by in the battle of Toyotas. Truex twice found the speed to make timely passes and ultimately took the first two stages, but he saved his best for the last segment.

Running seventh as the third stage began, Truex was back in front within several laps and merely got stronger as he went along. He had a 13-second lead with about 55 laps remaining and was running all alone before Kurt Busch blew an engine with two laps left to create extra time.

Truex’s dominance stole the spotlight from Kyle Busch, who won the Xfinity Series race earlier Saturday and for a while appeared headed toward NASCAR’s first same-day sweep of the two series. But Kentucky’s most dominant driver — nor anybody — else could touch Truex.

Larson’s finish was impressive considering he started 40th after failing inspection on Friday. He soon was among the contenders before being penalized for speeding on pit road, overcoming that setback to pass Kyle Busch after the final restart.

Dale Earnhardt Jr. led three laps and finished 12th, one spot higher than he started in his final Kentucky start.

SPARTA, Ky. (AP) — Dale Earnhardt Jr. barely had time to bond with Kentucky Speedway, and now he’s saying farewell to the track and the sport.

Fortunately, for NASCAR’s most popular driver, he’s leaving with a lovely parting gift along with lots of love from Bluegrass racing fans.

As Earnhardt prepared to start Saturday night’s 400-mile Cup race from 13th , track management gave him a deluxe jukebox on Friday as a token of its appreciation. Adorned with Junior’s No. 88 and his signature, the large jukebox that also goes to the race winner will be donated in his name to Nationwide Children’s Hospital in Columbus, Ohio, an organization he supports.

“That’s awesome because I know the kids are going to love it,” said Earnhardt, who visited with kids there this week. “We got them a little stereo, but this is going to take the cake. … It will make a lot of kids smile when they are around this jukebox and enjoying it together. I appreciate that.”

Other gifts are sure to follow as Earnhardt finishes his final circuit of full-time Cup duty. The ongoing farewell tour has made him reflect on his experiences, even at a track in which he’ll start for just the seventh time.

Kentucky is somewhat notable for Earnhardt’s final 2016 start before complications from concussion symptoms ended his season. Healthy now, he’s hoping the 1.5-mile oval can yield a victory and start a climb from 22nd in points into the playoffs.

“A win is going to be great any week, but this is a hero-one-week, zero-the-next sport,” said Earnhardt, who has two top-fives and the 2013 pole in six Kentucky starts.

“Even if we have a great run or a win, which would be awesome, there is another hill to climb and another one after that each week. This sport is so competitive and for us as a team it’s been a real challenge this year to sort of find our footing.”

While Earnhardt tries to find the right formula, speculation continues as to his possible successor in the Hendrick Motorsports Chevy.

Two-time Daytona 500 winner and 2003 Cup champion Matt Kenseth could be an option along with rising drivers William Byron and Alex Bowman. The 45-year-old Kenseth said Friday that he has no ride lined up for 2018 and is likely done at Joe Gibbs Racing.

Asked if he might put in a good word for Kenseth with owner Rick Hendrick, Earnhardt smiled and said the former champion won’t be hurting for opportunities.

I think that it’s smart for him to let everybody know early what his plans are or the lack thereof. He is a talented guy who is just a couple of races removed from being a winner and could show up any week and get to victory lane.”

Right now, Earnhardt’s objective is ending a 54-race drought dating to November 2015 at Phoenix. He also aims to bounce back after wrecking and finishing 32nd at Daytona.

A victory or competitive run at Kentucky would provide a fine ending and please his loyal fan base. The track that Earnhardt once lamented for its bumpiness has been repaved twice, and he seeks a similarly smooth run.

No matter how it ends, he’s enjoying the ride.

“You can make some choices to do something different in the corner to give you a chance to get around a guy,” Earnhardt said, “and that is a lot of fun.”