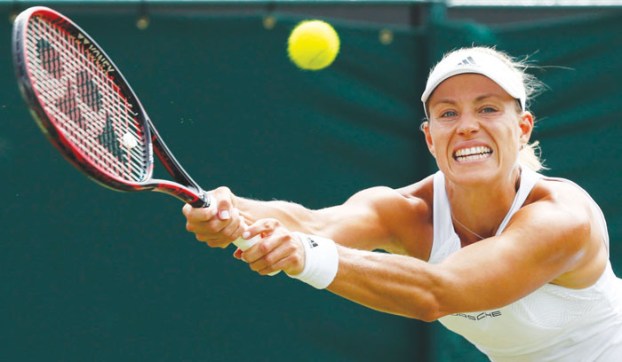 LONDON (AP) — Four of the remaining 16 women at Wimbledon have played in a final at the All England Club. One of them is certain to be eliminated in the fourth round.

Angelique Kerber and Garbine Muguzura, who have won titles at other Grand Slam tournaments, each lost to Serena Williams in the Wimbledon final the last two years — Kerber in 2016, Muguruza in 2015. They meet Monday for a spot in the quarterfinals.

The top-ranked Kerber has lost her past four matches against Muguruza.

“I think I have to play from the first point good tennis against her,” Kerber said Saturday. “I have to be aggressive, as well, and trying to (play) my game from the first ball that we hit.”

The other players with experience in the final at the grass-court major tournament are Williams’ older sister, Venus, and Agnieszka Radwanska.

Venus Williams has five Wimbledon titles and lost in another three finals — each time to Serena. Radwanska was the runner-up at the All England Club in 2012 to — yes, that’s right — Serena Williams.

Venus Williams lost in the semifinals last year and is playing at the tournament for the 20th time.

At 37, she is the oldest player left in the women’s draw. On Monday, she will play the youngest woman left, 19-year-old Ana Konjuh of Croatia.

“Yeah, it’s interesting, for sure,” Williams said. “But I guess when you walk on the court, I don’t think either of us is thinking about the age. You’re thinking about, ‘How do I win?’”

Konta has become the latest local hope at the All England Club. The last British woman to win Wimbledon was Virginia Wade in 1977.

Kerber and Muguruza had their chances to win the last two years, but they ran into Serena Williams. That can’t happen this year — the defending champion is pregnant and taking the rest of the season off.

“I have toughest rounds to come. I’m just looking forward for it,” said Muguruza, who won the French Open last year. “I’m not thinking that far, like most people do.

“For me, it’s just more simple than that. I’m just going to take care of my next match and we see from there. It’s just like that.”

That next opponent is the No. 1 player in the world — even if Kerber has been struggling at the major tournaments this season after winning the Australian Open and U.S. Open last year.

“It was for sure a really important win for me today, especially because it was a really up-and-down match, and I was down at least 2-4 in the second set,” Kerber said. “Maybe it is a turnaround. We will see.”

LONDON (AP) — With a week still to go, Wimbledon’s grass courts already are not the lush lawns players — and TV viewers — are accustomed to seeing early in the tournament.

Novak Djokovic noticed the ball bouncing differently in some patches.

Roger Federer and his opponent slipped during their third-round match.

The two past champions are wondering what sort of work can be done on the middle Sunday, when there is no competition, so the court conditions improve when action resumes with all 16 fourth-round singles matches scheduled for Monday.

“The first two matches I didn’t see any significant difference. But I was hearing a lot of comments from the other players. They were complaining. Especially on the outside courts,” Djokovic said after beating Ernests Gulbis in straight sets at Centre Court on Saturday.

“Today, I could see there is a difference in grass, in (the) turf itself. It was a bit softer, I would say, especially around a couple of feet inside and outside, around the baseline area,” said Djokovic, a three-time champion at the All England Club. “I haven’t had that kind of experience before in Wimbledon, to be honest. I mean, the courts are always perfect here.”

Federer followed Djokovic on Centre Court and described it as “a tad slippery” after losing his footing during one point in a victory over Mischa Zverev, who also took a tumble.

“But I didn’t feel like it was unsafe,” said Federer, who has won seven of his record 18 major titles at Wimbledon. “Maybe you don’t want players to feel that way, because the moment you become scared of moving properly, it’s really difficult to play, I must admit. The last thing we want to see is horrible injuries.”

Measurements taken throughout Wimbledon’s first week show the grass courts are as healthy as they have been in recent years, according to Neil Stubley, the head of courts and horticulture at the All England Club.

“We looked at the baselines and the areas that they thought there was an issue,” Stubley said. “We didn’t feel there was. The Grand Slam supervisor and assistant referee didn’t believe that there was either. When you look at the comparisons of other courts … they were in or around the same condition as the other courts.”

Very little rain has fallen over the first six days of the tournament, which Stubley said led to more wear on the courts.

Still, although he acknowledged the courts are under stress, he said there’s “not a doubt” they will hold up throughout Wimbledon’s second week.

“Because we have daily monitoring, we can keep a very tight rein on everything,” he said. “It never gets to the point where it’s ever going to get away from us because we’re on top of it every single day.”

Still, Djokovic was sure that something wasn’t quite the same as in the past.

“I’m sure they know what they’re doing. They know their job the best in the world. But you can see that there is a slight difference in the quality of the grass,” he said. “This year seems like it’s a bit softer.”

Noted Federer: “They have time to figure out how they’re going to prep (the courts) for Monday.”