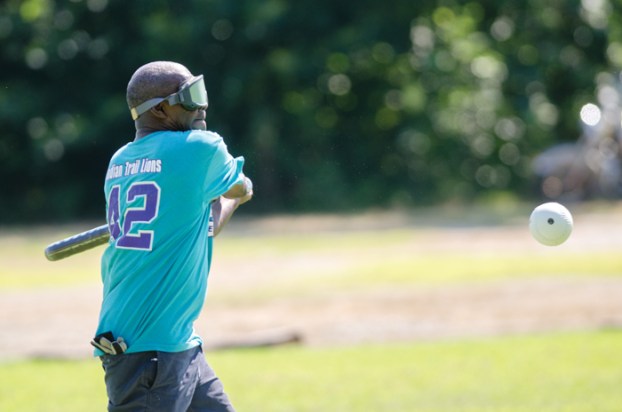 KRISTI CRAVEN/ SALISBURY POST A man with blacked out goggles swings at the continuously beeping ball during a game of Beep Ball at Gordon Hurley Soccer Complex on July 8, 2017 in Salisbury.

SALISBURY — It’s mid-Saturday morning when the game gets going. The pitcher stands at the ready, the outfielders are in position and the batter steps up to the plate. He taps home plate with the tip of his aluminum bat and takes a few experimental swings before settling into position.

But those thinking they came for a baseball game are in for a few surprises: the batter — and the outfielders — are wearing blindfolds, and when the pitcher tosses the ball it emits a high pitched beeping noise similar to an alarm clock.

“Beep ball,” as it’s known, is a game of baseball or softball that’s been modified for the visually impaired, and it has a long history in the Carolinas.

Forty years ago, there used to be a league that spanned the two states. There’s a national league, too, John Tinsley, a long-time volunteer for the Charlotte-Mecklenberg beep ball team, said. Legend among local beep ball players has it that once the Raleigh team challenged the Durham Bulls to a game — and won.

But Saturday was the first time in recent memory that Salisbury had a home game. Players came from High Point, Mecklenberg and Raleigh to play with the Salisbury team on a hot, humid morning.

The Salisbury team has only played one game before — just last month in High Point. Another game in Raleigh was rained out, Hailey said. And that’s when Salisbury decided play host.

Thanks to the YMCA, teams met at the Gordon P. Hurley Soccer Complex off Majolica Road. The location is set back from the road, Hailey said, and is in a quiet area — both key requirements for beep ball, in which players rely solely on sound.

Beep ball is similar to baseball and softball, from which it evolved. But there are a few key differences. For one, there are only two bases besides home plate — and they beep, too. When the ball is sent flying to the outfield, a base is triggered at random and the batter has to run to it, navigating on sound alone.

Outfield is divided into seven zones, each manned by a player. When the ball lands, a sighted “zone caller” names the first two zones the ball rolled through. For players, it’s a race against time — the other team finding the ball equals an out.

Batters are allowed four strikes and one ball — there are no walks.

“You either make a run or you make an out,” Tinsley said.

Though most of the players are visually impaired, everyone — except the pitcher and two “zone callers” — wears blacked out goggles or a blindfold. It provides an equity that players find comforting.

“When I’m playing this game, I’m not blind,” Davain Andrews said. “Everybody on this field is equal.”

Andrews, of High Point, is a combat Marine who lost his vision. For him, beep ball has been a blessing.

On Saturday, he was decked out in black and white Nike shoes, kneepads and his team shirt. He’s been playing beep ball for over 10 years, after a fellow Marine got him into it in 2005.

“You forget about being blind,” he said. “You just come and play.”

Andrews and others who have fallen in love with beep ball hope to reach out to younger people in the visually impaired community and revitalize the game.

Saturday was the first game played in collaboration by the North Carolina teams in several years, Tinsley said.

Once upon a time, there used to be games running in the Carolinas every other weekend. Teams would travel, and compete against each other. But the North and South Carolina league petered out as players got older, moved or pursued family life. Though the national league is still running, Tinsley said.

On Saturday, the teams blended and mixed, as none of them had the seven players required to make a full team.

But spirits were high and laughter flowed as the game wore on. Hailey and Tinsley said that they’re hoping to restart the league, as the game means so much to its players. Andrews agreed, and couldn’t speak highly enough of beep ball.

David Freeze: Much different than what I expected!