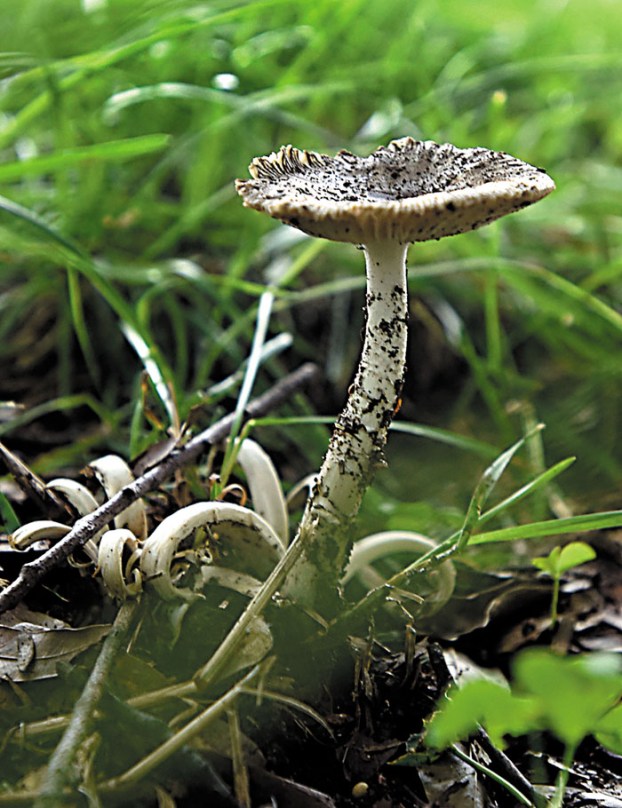 A mushroom pops up betweem the blades of grass. photo by Wayne Hinshaw, for the Salisbury Post

Recently, I was capturing some photos for an unrelated project in East Spencer and I discovered some mushrooms growing in the front yard of the old Rowan County Schools office building.

I guess it was the old East Spencer High School earlier.

Now, I grew up being told that mushrooms are toadstools. I had never heard of a mushroom until I grew up, and then I found another thing that I was told as a young boy that might have been incorrect.

I read that all toadstools are poisonous and mushrooms can be OK to eat. Then I read that that information is also incorrect.

You best know what you are doing before you eat either one. So are the toadstools or mushrooms poisonous or not?

We have surely had a lot of rain recently, and that has made mushrooms pop up out of the ground. I read that in California, there was an area that used to have an abundant supply of edible mushrooms but there had been none in that area after several years of drought. This year, California has had floods and too much rain in some places.

Guess what? That area that had no mushrooms for years is crowded with great edible mushrooms this year, and people are flocking to the woods to pick them.

The rain must be the key to mushrooms. I ran across the short poem “Thunder Nights” by Romeo Naces, which reads:

I figure that must be the answer to why I found mushrooms in the front yard of the old East Spencer High School. It must have been the rain.

Now, I’m still not sure about this naming of toadstools and mushrooms. After reading another poem for more correct information, it seems that toadstools must attract fairies.

A poet named Will Justus wrote “The Secret Glade” about toadstools.

“Where is that secret glade?

The one where time seems to fade

In that place magic pools

And fairies  lounge on toadstools. … ”

Justus wrote more words in his poem, and it is really pretty what he says. But I am still confused about mushrooms and toadstools.

Are they mushrooms or toadstools? Do fairies only lounge on toadstools and leave mushrooms alone?

While I was over in East Spencer in that old school’s front yard, I didn’t see any fairies lounging around.

By Elizabeth Cook elizabeth.cook@salisburypost.com SALISBURY — You won’t find many photos of Mary Messinger when you look through the Salisbury... read more