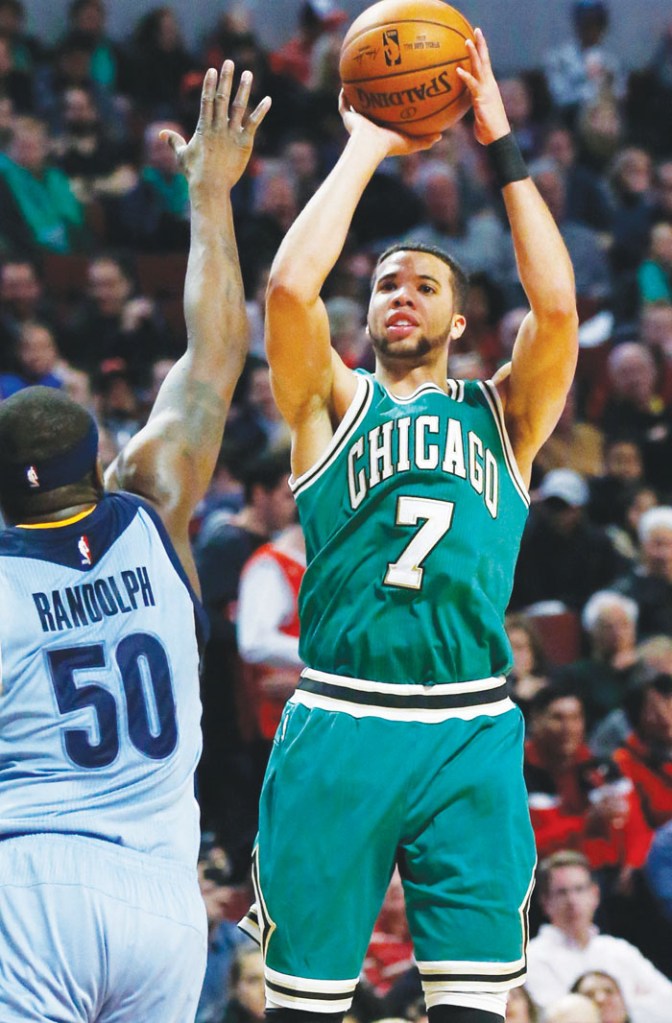 FILE - In this March 15, 2017, file photo, Chicago Bulls guard Michael Carter-Williams shoots over Memphis Grizzlies forward Zach Randolph during the second half of an NBA basketball game, in Chicago. Carter-Williams, who won the NBA Rookie of the Year award in 2014, now finds himself looking to reignite his NBA career serving in a backup role behind Kemba Walker, who helped recruit him to Charlotte. (AP Photo/Nam Y. Huh, File)

The Hornets officially signed Carter-Williams to a one-year, $2.7 million contract on Friday, filling a need at backup point guard behind Walker, who’s coming off his best season. The Hornets also envision the 6-foot-6 Carter-Williams playing alongside Walker at times as an off guard in certain situations, similar to how they used Jeremy Lin and Walker together two seasons ago during a run to the playoffs.

Carter-Williams’ upside remains a bit of an unknown.

He was named the NBA’s rookie of the year in 2014, but has been traded twice since and has struggled at times with injuries.

He hasn’t come close to matching the 16.7 points, 6.2 rebounds and 6.3 assists he averaged as a rookie for the Philadelphia 76ers.

The Sixers traded Carter-Williams to Milwaukee midway through his second season. The Bucks later traded him to Chicago where he averaged just 6.6 points last season while starting a career-low 19 games.

Now Carter-Williams is eager to get his career back on track and said Walker is a “big part of the reason” why he chose to sign with Charlotte.

“I can learn a lot from him,” Carter-Williams said of Walker. “He was eager to play with me as much as I am to play with him.”

Added Cho: “Kemba’s got a great eye for the game, really follows the game closely and he really felt that Michael was a great fit here. I think he will be a great fit here with his size and playing (ability) and I know the coaches will do a great job getting the best out of him.”

Carter-Williams said he isn’t worried about putting up the numbers he did as a rookie.

“I’m just trying to come here and do the little things and just be positive,” Carter-Williams said. “Those things will take me a long way. If I can positively affect the team, then it also works for myself. That’s really my mindset.”

This is the first time Carter-Williams has had the option of choosing his NBA team, which has him excited about playing for the Hornets.

He likes the idea of being where he’s wanted.

“Kemba just told me, ‘we really want you and you’d be a big help to the team,’” Carter-Williams said. “I trust him. I’ve worked out with him my rookie year before I got to the NBA. I knew him previously, so I trust his word and this seemed like a good place and (it all) kind of seemed like a perfect storm. (Him recruiting me) put the icing on the cake.”

The Hornets haven’t been big players in free agency, in part because they took up so much cap space with landing eight-time All-Star center Dwight Howard in a trade.

Don’t expect too many more moves from Cho this summer.

Cho said the Hornets are approaching the luxury tax threshold, although they still hope to land one big man and possibly a third point guard before the season.