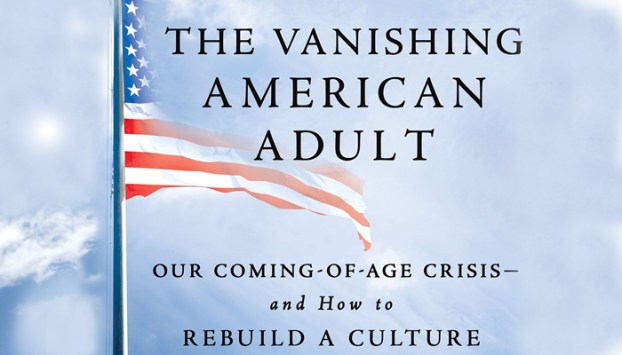 Tom Campbell: Are we a nation of vanishing adults? Peter Pan never grew up, and there is evidence we have a generation of many young people who, like Pan, are stranded in Neverland.

Nebraska Sen. Ben Sasse’s interesting book, “The Vanishing American Adult,” contends we live in an America of perpetual adolescence. Our young may have reached 6,574 days on earth, when they become adults in the eyes of the state, but there are many markers associated with becoming an adult that an increasing number fail to live into.

Sociologists say becoming an adult is widely accompanied by rites of passage that include moving from their parents’ home, leaving school for the final time, getting a full-time job, reaching economic self-sufficiency, loss of virginity, getting married, having children and establishing an independent household. These milestones don’t necessarily occur in that order and might not include all, but should include most of them.

The roles of children have changed dramatically over the past 175 years, when families had many children to help with the labors on the farm. As families moved to town many “little citizens” worked in factories. As late as the 1870s it was estimated that children between the ages of 10 and 19 were providing at least one-third of the family income. In 1945, only three-quarters of teens attended school. Today the priorities are reversed. We are a “much school, little work” culture.

Kids are softer today, as evidenced by the fact that one in five teens is obese and that most over 13 spend 60 percent of their waking hours passively consuming media. In an era of “helicopter parents,” our young know parents are always there to catch them when they fall or have problems. Parents spend so much time cultivating self-esteem, micromanaging and scheduling activities that our young don’t know how to make decisions and manage their time.

Sasse says it is time to take the “training wheels” off our pampered children and undertake a deliberate and active program to help steer them into adulthood, recommending five character-building habits to help guide the process.

First, discover the body and the many diverse stages of life that lie ahead. Emerging adults are cut off from older generations, immersed in a culture of their peers that prevents them from understanding life stages that include joy, pain, suffering and loss.

Second, he suggests children must develop an age-appropriate work ethic, starting as early as 3 or 4, with increasing in responsibilities as they become teens. From this they will learn success and failure, the satisfaction of doing work well and valuable life skills.

Third, they must be taught that things alone cannot make us happy and embrace limited consumption, learning the difference between needs and wants. Learning to limit desires and find the fulfilling satisfaction associated with meeting true needs brings joy, peace and contentment.

Fourth, they must learn to travel and travel light. Experiencing other cultures helps them gain perspective, both on their own environment as well as those of the larger world.

Finally, they should learn how to enjoy reading and decide what to read. In addition to opening the world to them, they will become literate, learn to evaluate information, develop opinions and gain wisdom.

The America of tomorrow demands developed adults and it is the role of today’s adults, as has always been the case, to help them grow into that future.

Tom Campbell, former assistant state treasurer, is creator/host of NC SPIN, a weekly television discussion of issues airing in the Triad Sundays on WXLV at 7:30 a.m.

Jay Bolin: Who wants a fire station next door?

By Jay F. Bolin Special to the Salisbury Post The city of Salisbury is attempting to break precedent by siting... read more