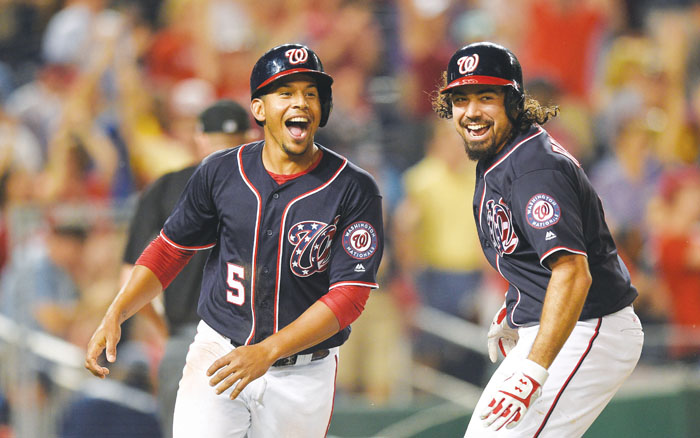 Washington Nationals' Adrian Sanchez (5) reacts with Anthony Rendon, right, after scoring the winning run on a single by Daniel Murphy during the 10th inning of a baseball game against the Atlanta Braves, Friday, July 7, 2017, in Washington. (AP Photo/Nick Wass)

Adrian Sanchez led off the 10th against Ian Krol (1-2) with his first major league hit and two batters later moved to third on Ryan Zimmerman’s single. Murphy then lofted an opposite-field single over left fielder Matt Kemp’s head to win it for Washington.

Washington extended its lead in the NL East to 9 1/2 games over Atlanta.

Trailing 4-1 and facing Braves closer Jim Johnson, the Nationals opened the ninth with a single by Bryce Harper and a walk to Zimmerman. Murphy’s single to right scored a run, and Anthony Rendon then lofted an RBI single to right.

An out later and with Matt Wieters at bat, Atlanta manager Brian Snitker was ejected for arguing a checked swing. It was his third ejection of the season.

Wieters hit a sacrifice fly to score Zimmerman, and shortstop Wilmer Difo then singled in Murphy to tie it. It was Johnson’s seventh blown save of the season.

Atlanta starter R.A. Dickey retired his first 10 hitters and took a no-hitter into the sixth before shortstop Stephen Drew broke it up with a leadoff double. The knuckleballer gave up a run and three hits while striking out seven in seven innings. In four starts since yielding eight runs in five innings on June 13 during a loss at Washington, he is 3-0 with a 1.00 ERA in 27 innings.

Washington’s Max Scherzer set down the first nine batters he faced and struck out 10 over 7 2/3 innings while allowing four runs. It was the eighth time in nine starts and the 11th time this season Scherzer recorded 10 or more strikeouts, and he leads the NL with 173 strikeouts.

Freddie Freeman homered and drove in three runs for Atlanta. The solo shot in the seventh was the first homer since May 16 for Freeman, who returned from the disabled list Tuesday after missing 44 games with a fractured wrist.

Braves: IF/OF Danny Santana (bacterial infection) was placed on the 10-day DL and the team recalled IF/OF Jace Peterson from Triple-A Gwinnett. Santana was hitting .230 with two homers and 17 RBIs in 42 games with the Braves. Peterson returns to Atlanta three days after being optioned to Gwinnett.

Nationals: Washington activated OF Chris Heisey (ruptured right biceps) from the DL after missing 40 games. He is hitting .128 with a homer and three RBIs this season. He replaces OF Michael A. Taylor, who went on the 10-day DL with a right oblique strain. . The Nationals signed LHP Seth Romero, their first-round draft pick. The former University of Houston pitcher’s deal includes a signing bonus of $2.8 million.

Braves: RHP Julio Teheran (6-6, 5.14 ERA) seeks his first victory since allowing two runs in seven innings at Washington on June 14. He is 0-2 with a 6.48 ERA in three starts since that win.

CLEVELAND (AP) — Carlos Carrasco handled Detroit’s lineup for the second time in a week — striking out a season-high 11 and pulling off a rare nine-pitch, three-strikeout inning — and Lonnie Chisenhall hit a two-run homer, leading the Cleveland Indians to an 11-2 win over the Detroit Tigers on Friday night.

The right-hander also recorded an “immaculate inning” by striking out the side in the fifth on nine pitches. Carrasco is just the second pitcher in Cleveland history to do it, joining Justin Masterson (2014).

TORONTO (AP) — George Springer homered twice and tied a career high with five RBIs as Houston rocked Aaron Sanchez in his return from the disabled list, propelling the Astros over Toronto.

Springer hit his 26th and 27th homers of the season, including a two-run shot off Sanchez (0-2) in the second inning. The All-Star outfielder had four hits, and the Astros improved their major league-leading record to 59-28.

Rizzo chased Trevor Williams (3-4) with a two-run drive in the fourth that made it 3-0.

Bryant hit a solo shot against Jhan Marinez in the sixth that cleared the left-field bleachers and added a two-run drive in the eighth off Antonio Bastardo. He also had an RBI triple and finished with four hits, helping Chicago start the weekend series on a winning note after dropping six of nine.

Carl Edwards Jr. (3-1) threw 1 2/3 innings. Pedro Strop gave up an RBI single to Josh Bell in the seventh. But Koji Uehara retired the side in the eighth, and Wade Davis worked the ninth.

Pedroia hit a two-run shot during a four-run third, and Bradley had a fourth-inning solo drive off Jake Odorizzi (5-4) as Boston took a 5-0 lead.

Steven Souza Jr. hit a solo homer in the seventh for the Rays, who beat Chris Sale and the AL East-leading Red Sox 4-1 in the opener of a four-game series Thursday night. The Rays, third in the division, trail Boston by 5 1/2 games.

Bruce’s homer in the fifth broke a 4-4 tie. It was his 11th home run in 61 career games at Busch Stadium.

DeGrom (9-3) gave up four runs, all on solo homers, in seven innings. It was the first time in his career that deGrom gave up four home runs in a game, but it was good enough to tie his career-best winning streak set in 2014.

Hamels (4-0) allowed three singles, two to Albert Pujols, and one walk. He struck out six, matching his season high, in his third start since returning from the disabled list on June 26.

Ricky Nolasco (4-10) was rocked for eight earned runs in 1 2/3 innings and gave up back-to-back homers to Beltre and Rougned Odor. He entered the game with 15 1/3 consecutive scoreless innings that included his sixth career shutout.

After Cory Spangenberg and Carlos Asuaje hit singles off Hector Neris (2-3), Hedges fouled off a safety squeeze before hitting a fly ball to right-center that drove in the go-ahead run.

Padres starter Clayton Richard allowed one run and five hits in six innings before a 94-minute rain delay forced him out. Brad Hand (2-4) got four outs for the win and Brandon Maurer finished for his 18th save.