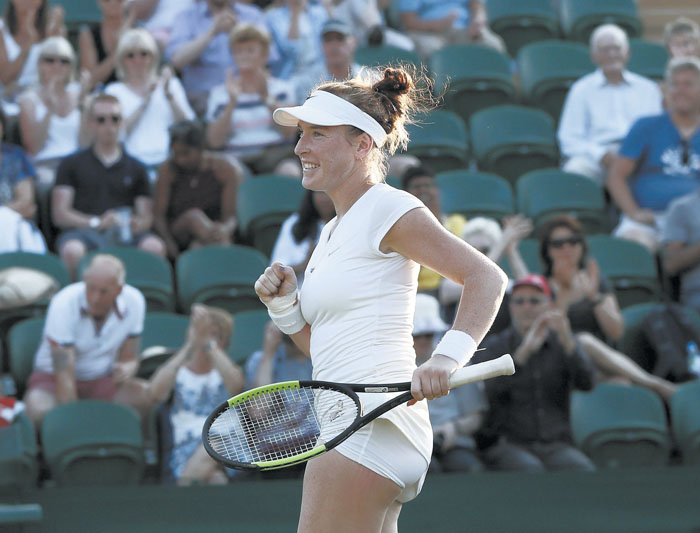 LONDON (AP) — Madison Brengle knew, of course, that her opponent, Petra Kvitova, was a two-time Wimbledon champion and a popular pick to win the title again this year.

Brengle also was aware, of course, that she herself never had won so much as one main-draw match at the All England Club until this week.

This, instead, is all the 27-year-old from Dover, Delaware, was focused on as she began playing Kvitova on Wednesday evening on Court No. 2: Please just let me win a game. The 95th-ranked Brengle did just that — and much, much more, stunning the 11th-seeded Kvitova 6-3, 1-6, 6-2 to reach the third round at Wimbledon.

The reason for Brengle’s preoccupation with taking merely a single game? In her Wimbledon debut in 2015, she lost to Venus Williams 6-0, 6-0.

“So, like, that’s always in my head when I’m out here,” Brengle said, pointing a finger at her right temple. “It’s like, ‘Oh, my goodness, don’t do that ever again!’ That was really tough for me.”

Turned out, she didn’t need to stress about a shutout for too long: Brengle broke the strong-serving Kvitova to take the very first game.

“As long as I got on the board to start, then I could relax,” Brengle said with a smile, “because, trust me, an ‘O-and-O’ stays with you.”

Now she’ll have this victory to cherish, along with another one from this year that also holds some significance: Brengle beat Serena Williams at a tuneup tournament at Auckland, New Zealand, back on Jan. 4. Williams went on to win the Australian Open later that month and hasn’t played since — she is pregnant and taking at least the rest of this year off — so Brengle is, for the moment, the last woman to defeat the 23-time Grand Slam champion.

“That’s my thing,” Brengle said, holding up a fist and laughing. “I’m going to hold on to that one forever.”

Kvitova, who won Wimbledon in 2011 and 2014, had been favored by some British bookmakers to lift the trophy at fortnight’s end, despite competing in only her third tournament of her comeback. She was attacked by a knife-wielding intruder at her home in the Czech Republic in December and needed surgery on her left hand, the one she uses to hold a racket.

Still without full strength in that hand — clenching it for a celebratory fist pump remains difficult — Kvitova returned at the French Open in May, losing in the second round there. But then she won a grass-court title at Birmingham in June.

“I feel just really empty right now. I know my body; it’s not great. But mentally I’m really glad that it’s over. I mean, it was kind of a fairy tale, but on the other hand, it was very tough,” she said. “I just need to look forward and look to the future.”

Kvitova said she felt ill Wednesday, and she was visited by a trainer in the third set.

The temperature soared toward 85 degrees (near 30 Celsius) after being in the low 70s (20s Celsius) the prior two days.

“When the match (got) longer and longer, I felt a little bit sick and tired. So I couldn’t really move. I was so slow,” she said. “I felt like, I don’t know, like an animal. But a very slow animal.”

Brengle took advantage by playing plenty of slices and changing speeds and angles. She was out-hit by a wide margin in the second set, but her steadier play in the third was enough. In the first and last sets combined, Kvitova made 45 unforced errors to 11 for Brengle.

Kvitova was one of a half-dozen seeded women to lose on Day 3, a group that also included No. 15 Elina Vesnina (beaten by new mom Victoria Azarenka, a former No. 1 and two-time Australian Open champion), No. 17 Madison Keys, No. 18 Anastasija Sevastova, No. 22 Barbora Strycova and No. 25 Carla Suarez Navarro.

The action was much more straightforward in the men’s draw, with straight-set victories by defending champion Andy Murray and Rafael Nadal, who has won the last 26 Grand Slam sets he has played.

For Keys, the 6-4, 6-7 (10), 6-1 exit in the second round against 86th-ranked Camila Giorgi of Italy was the American’s earliest in five appearances at the All England Club.

“The whole time, I was just kind of waiting for her level to drop and it never really did,” said Keys, who recently had a second surgery on her left wrist to remove scar tissue from the original procedure in October. “It kind of just away from me really quickly and, not having a lot of matches under my belt, it was tough to get it all back.”

LONDON (AP) — They were buggin’ out at Wimbledon on Wednesday.

Hundreds of flying ants swarmed around various courts at the All England Club, distracting players during their matches, as the temperature warmed up considerably, from the low 70s (20s Celsius) to nearly 85 degrees (nearly 30 Celsius).

It left the racket-wielders swatting the bugs instead of tennis balls, at times.

Steve Johnson, an American seeded 26th, was startled when one of the critters buzzed its way into his right ear at the precise moment that he came up with a forehand winner during what would become a 6-3, 6-3, 4-6, 6-3 victory over Radu Albot of Moldova.

Johnson did a little dance while he extracted the invader.

“Thankfully, I ended the point right there, because I wouldn’t have run for the next ball. It just got in there. Eventually it got out, but I didn’t want it to get any further than it did,” Johnson said.

“They were everywhere,” he said. “It was a mess out there. I’ve never seen that here before.”

Local media have reported about a wave of flying ants across Britain this week, a migration of sorts that is a result of just the right combination of heat, humidity and wind.

Especially during the early afternoon on Day 3 of the grass-court Grand Slam tournament.

Before Johnson headed out to Court 18, 24th-seeded American Sam Querrey played his match there, and dealt with the same type of issues created by the little winged things.

The rules would allow Querrey to ask the chair umpire to consider halting play, at which point a Grand Slam supervisor might head to the court to weigh in.

It never reached that point Wednesday, although things did get particularly bad for about a half-hour that included the end of the second set, the only one Querrey dropped.

“If I had won that set,” he said, “probably wouldn’t have bugged me as much.”

Johanna Konta, Britain’s best chance for its first female champion at Wimbledon in 40 years, fretted about swallowing some of the ants during her 7-6 (4), 4-6, 10-8 victory over Donna Vekic at Centre Court.

“I definitely have taken home a few — both in my belly and in my bags,” the No. 6-seeded Konta said.

A reporter asked her whether the insects were tasty.