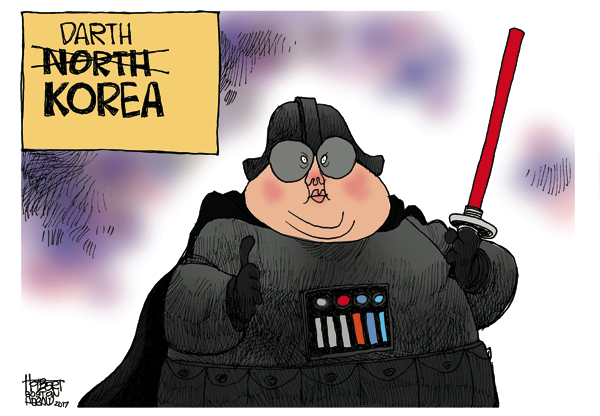 I visited your store for the first time yesterday. The doughnuts were fantastic.

Their doughnuts are delicious. I had wondered about the pink box; now I know the answer. Welcome to Salisbury, Country Donutz.

We visited your shop Sunday after church. The doughnuts are fabulous. We even had doughnuts left for breakfast the following two mornings and they were just as good. Thank you for coming to Salisbury. Love the pink boxes.

OMG. I’m from California, and I can say it makes me happy to know that I have now a place that would bring me back memories. Go, pink boxes, the bomb!

Pretty ambitious — West Coast doughnuts in the heart of Krispy Kreme country. Kind of like opening a lutefisk cafe next to a barbecue joint. Good luck.

The quoted comment “Conservatives … recoil from cruelty” is a paradox in my view for a good reason: Republicans rarely, if ever, speak against cruelty to others of different races, sexual proclivities or other human differences.

Republican leaders are in a position to campaign against such discrimination. Yet you hold religion like a banner to justify mistreatment of some people, except OWM (old white men).

Since you are being “transparent” and didn’t include any numbers in your opinion, I am still unaware of what you paid CTC for their recommendation. However, had that been done before the money was spent and since we are “separating politics from business,” as they recommended, then the only reasonable conclusion would have been for the politicians to stay out of private business endeavors.

Actually, if you had just consulted the voters, you would have saved thousands as I am sure CTC didn’t come cheaply. Did you guys not see how poorly the county performed when they decided to build a baseball stadium? How did that work out?

Mr. Post has attempted to openly and transparently bring about a “fix” to the broadband profitability issues that affect Salisbury’s budget. His efforts have given City Council the best information to make informed decisions. The transparency has given the Salisbury Post better access to information to report to the public they serve. Our community is better off, due to Mr. Post’s bold efforts. Thank you, David Post!

I don’t know much about Power Cross, but it’s hard to see a downside to it. It’s a private group; if it doesn’t do what it promises, then people are free to not use it. The Miller Center and Hall’s Gym are available for rent by anyone who meets the criteria for usage.

The article mentions the fact local organizations should be allowed the opportunity to offer programming. Unless I missed something, Power Cross came in on their own; no one asked them to come. Why haven’t these other organizations stepped up and offered programs using the Miller Center and Hall’s Gym before? As far as I know they, too, are welcome to rent the facilities. …

It’s easy to criticize and keep people out, but it’s another thing to step forward and offer the same programs as an outside organization. Now that Power Cross has decided not to use those facilities, it’s wide open for some of those organizations to step up to the plate and do it. If not, then allow Power Cross or someone in who will.

I have a novel idea, why don’t locals work with an outside organization and then it will become a local organization? It’s about the youth and providing opportunities right?

… Editorial: And still we need more

Perhaps we, the community, might help our local groups first. Do we really need another group to come in and do the job we can do by reaching out to our own?

… Double feature: The Cauble sisters lead with their hearts

I am so blessed to call these two good friends of mine. They are two of the nicest people I know and their love for people and their work is genuine and evident in all they do. Great article.

I love these sweet sisters. We have been associated through the hospital for 38 years. Two of the best nurses ever!

These ladies are two of the best nurses. I love the way they still wear white uniforms and their nurse’s hats. Worked with them many years at RRMC

I work at the hospital for 10 years and these two ladies always will greet you with a smile. They are two extraordinary angels. God put them here for a reason.

I’m so glad that they getting recognition, because they surely deserve it. May they continue to be blessed on their nursing journey.

They are my second cousins, and I always enjoyed the time we spent together as children. So happy to see them one night when my husband was in the hospital. They meet in a quiet place to enjoy coffee and pray before their shift begins. They are very impressive women.

It is such a honor to be a participant in the Faith Idol competition this year. I’m always thankful for an opportunity to share God’s word through a song. The crowd was awesome.

Thank you to F&M Bank and those that organized the event for this opportunity to be possible and the great town of Faith for a fabulous event to celebrate our freedom and independence.

… Farabee: I’ll pray for you

Ann, such a great article and reminder that we should never be ashamed to pray for someone right when we’re asked — and sometimes when we’re not. I’ve had a few occasions where I would see someone and God would impress me to pray for them right then. Of course, I would ask, Can I pray for you? It can be life-changing for you and that person.

You are right. It can be life-changing. So often, people are afraid to pray aloud because they fear they don’t have the right words to say. I had to quit worrying about that and just know that God was honoring my faith and willingness to do what He said — pray.

More — or more eloquent — words do not necessarily make it a more effective prayer.

… Patriotism once united Americans. Now it divides us.

What a joke. Lincoln spit on the Constitution more than any other president. The people on the left hate what has made this country great; they are trying to turn us into a socialist cesspool like Europe. Decent, upstanding Americans will not stand for this.

The founding principles of government of the people by the people was destroyed by Lincoln and the current leftist scumbags are trying to finish off this great country. Anyone that doesn’t see that is either complacent or willfully ignorant.

The joke is ad hominem fallacies made by those who promote their ideologies with pejoratives. Their dogmas foster the kind of division stated in Yuva Levin’s article. Is there confusion between nationalism and patriotism that’s causing a division?

Lincoln did what he could to preserve the Union. The traitorous Confederates were the ones who spat on the U.S. Constitution. The writ of habeas corpus was suspended due to rebellion, invasion and a threat to public safety.

Thank you for bringing an important issue to public attention. Nurses are one of the most trusted public professions and they work hard to provide safe, competent care for clients.

Elder abuse is cruel and degrading at the very least, and indescribably horrific at the worst. Please, everyone, pay attention to your loved ones, friends and patients as they may be unaware that the treatment they receive is not acceptable.

Jason Smith, the owner of the Hot Dog Shack, is a wonderful man. We have known him since he was a young man working at the Boll Weevils Stadium.

My husband was in ICU at Novant Medical Center in Salisbury for two months. Our family was in the ICU waiting room day and night until he passed away. Jason came in with a cardboard box stacked with hot dogs, hamburgers, cheese burgers, chips and a box of bottled water. We were surprised but thankful.

Jason is always doing things to help and uplift others. If you have never been to his shack, drive over to Granite Quarry on Highway 52 and you will be glad you did. Bless you, Jason;  we love you

… ‘He was just a beautiful soul:’ Todd Littleton was always there for his son

Todd, you say it so beautifully. And I love Eydie’s response for Gavin to run, leap and jump, for the joy is in him now. Amen. He is with his Savior now, Jesus, and they are cutting up and most of all smiling big smiles. Makes me smile when I think of Gavin’s smiles. Love y’all.

What a beautiful story. Your son is now in heaven with Jesus. We need to remember that the time we have with each other is short. Love one another.

So sorry for your loss. … He was a great young man, who lived with the hand he was dealt with courage and grace. He is free of all constraints. You will see him again. Just remember that if a cardinal appears, an angel is near.

He was and will continue to be an inspiration to all of us.

… Salisbury Police take foot patrol one step at a time

I think this is great for the community. A little community policing never hurt anyone. This is the first step to lowering crime in Salisbury.

Great program. Neighborhoods, please get to know and trust your officers. Remember, they are out there for you.

I believe this will go a long way toward making Salisbury safer. Thank you, Salisbury Police Department, for being willing to do this.

Wonderful family, and Josie is God sent. I got to witness this firsthand. God is so good.

What an amazing blessing. Thank you for this article that was both inspiring and informative.

Bennett and his family are an amazing part of our community, but with Josie, I’m sure more great things are in the future. Thank you for this great article

Dart to the continuing spread of fentanyl and heroin, which together killed more than 30 people in Rowan County last... read more