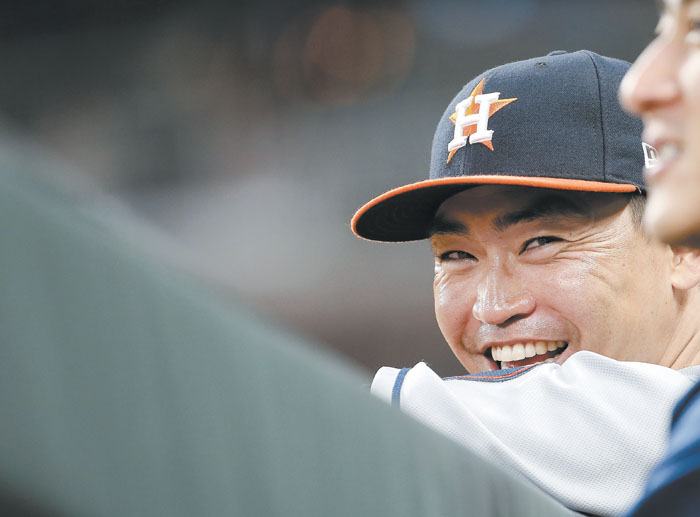 Houston Astros outfielder Norichika Aoki (3) of Japan, laughs with a teammate as he watches from the during a baseball game against the Atlanta Braves Wednesday, July 5, 2017, in Atlanta. (AP Photo/John Bazemore)

ATLANTA (AP) — George Springer drove in the go-ahead run in the seventh inning, Josh Reddick and Marwin Gonzalez each had three RBIs and the streaking Houston Astros beat the Atlanta Braves 10-4 on Wednesday night.

Houston has won four straight and 12 of 15 to improve to 58-27 overall, best in the majors. One night after beating the Braves 16-4, the Astros got another big night from the top of their order.

The first three batters — Springer, Jose Altuve and Reddick — went 8 for 15 with six RBIs and hit a combined .581 in the two-game series with 15 RBIs in 31 at-bats.

Norichika Aoki doubled to begin the three-run seventh and chase Braves starter Jaime Garcia (2-7). Springer followed with a single, Altuve with a double and Gonzalez with a single to make it 7-4.

Houston led 4-0 in the three-run fifth on Springer’s single and Reddick’s two-run double. Reddick doubled twice as the Astros finished the game with six doubles and have 20 over the last three games.

Houston starter Joe Musgrove retired 13 of the first 14 batters he faced as the Braves managed to get only a first-inning single by Freddie Freeman and a second-inning fly ball by Tyler Flowers out of the infield.

After striking out the first two batters in the fifth, Musgrove ran into trouble when Garcia had a two-run single and Ender Inciarte hit his seventh homer, a two-run shot.

Musgrove gave up five hits and four runs and struck out six in 5 2/3 innings. Chris Devenski (6-3) replaced Musgrove and earned the win after walking one and striking out two in 1 1/3 innings.

BRAVES BY THE NUMBERS

Freeman went 2 for 4 in his second game back from the DL and had another clean night fielding in his second start at third base. … LF Matt Kemp was 9 for his last 51 before he singled in the eighth. … Garcia, who allowed 10 hits, five runs and struck out five in six-plus innings, hasn’t won a decision in his last seven starts.

Astros: All-Star SS Carlos Correa was out of the lineup with a sore left thumb. He left Tuesday’s 16-4 win after jamming his thumb on a head-first slide at the plate in the fourth inning. X-rays were negative. Astros manager A.J. Hinch said Correa was available to help off the bench. He is listed as day to day.

Braves: INF-OF Sean Rodriguez will play at Single-A Rome on Thursday, his fourth rehab appearance, and then spend the weekend with Triple-A Gwinnett. Rodriguez, who signed a two-year deal as a free agent last November, could make his Atlanta debut before the end of July.

Astros: All-Star RHP Lance McCullers (7-1) will make his third start since returning from lower back discomfort when Houston opens a four-game series at Toronto. McCullers is 3-1 with a 3.02 ERA in eight starts on the road.

Braves: RHP Mike Foltynewicz (6-5) will make his 16th start as Atlanta begins a four-game series at NL East-leading Washington. Foltynewicz is coming off his best career start, taking a no-hitter into the ninth inning of a 3-1 win at Oakland last Friday.