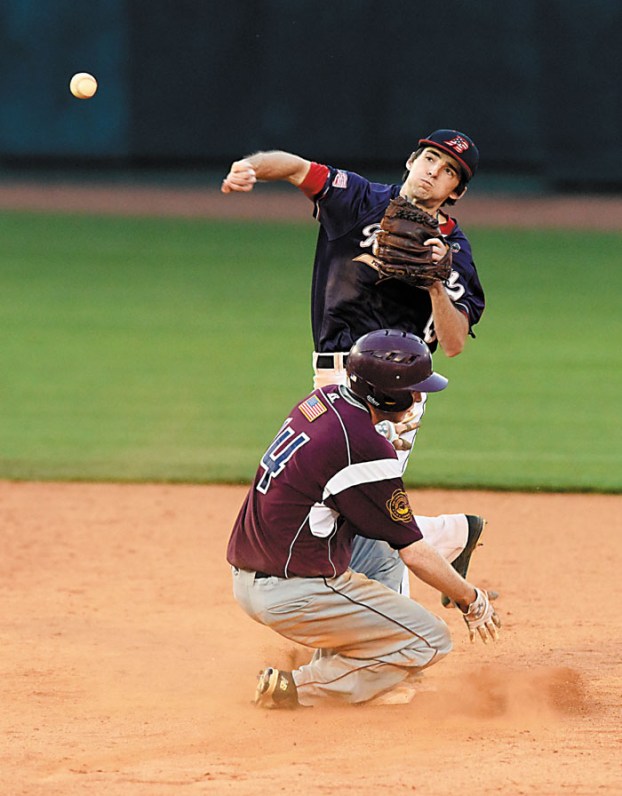 Wayne Hinshaw/for the Salisbury Post ... In an earlier game this season, Rowan second baseman Tanner File makes a throw to first after getting a force out. File had three hits in Thursday’s series-clinching win against Winston-Salem, after stroking four hits on Wednesday.

SALISBURY — You don’t have to be Rodgers & Hammerstein to admire Rowan County’s production in its second-round playoff series this week.

Post 342 broke out the brooms Thursday night at well-attended Newman Park, where it danced its way to a three-game sweep of Winston-Salem, winning 15-3 in seven innings.

“We know what we need to do to win,” catcher Pearce Wilhelm said after Rowan (27-1) earned its ninth straight victory and a berth in next week’s Area III semifinals. “And right now we’ve just got to keep playing our game.”

Rowan’s game is a can’t-miss show these days. After edging W-S (9-14) in Tuesday’s molar-grinding series-opener, Rowan responded with consecutive wipeouts in a dramatic return to form. Last night it collected 15 hits — seven for extra bases — and sent the weary guests home empty-handed.

“That’s a good team over there,” coach Jim Gantt said afterward. “Their catcher got hurt and we never did see some of their best pitchers. That’s why it’s important to win your division and get a higher seed. You get that bye and don’t have to play in the first round. That was our reward.”

Post 55 — which opened the season with four straight wins, then dropped seven in a row —finished its season fatigued and shell-shocked.

“This made six games in five days for our team,” W-S coach Mike Lovelace said. “I’m not making excuses, but they had everybody fresh. We didn’t.”

Winston-Salem hurt itself by committing five errors, which Rowan parlayed into eight unearned runs. It pounced on losing pitcher Noah Kiser for six runs in two-plus innings, then cracked the game open with four runs in the last of the fourth.

“It goes back to the first game of the series,” infielder Tanner File said, referencing Rowan’s 4-3 win on Tuesday. “That was one of the closest games we’ve had all season. It put us in check and made us realize we needed to play better.”

File responded by going 4-for-6 in Wednesday’s rout at Mount Tabor High School — a feat camouflaged by teammate Chandler Blackwelder’s three-home-run explosion. Last night the second-baseman went 3-for-4 with a pair of doubles, three runs scored and two RBIs. He recorded hits against three different pitchers.

“Tanner was getting hot just before he got mono,” Gantt said. “Now he seems to be getting his swing back. He’s been a really good player, solid defensively and he jumped all over one that he hit in the gap. You don’t think of him as a great hitter, but his power will surprise you.”

File and DH Brandon Walton both slugged doubles off the wall in Rowan’s five-run third inning. File later doubled down the left-field line in the sixth and may have been robbed of another two-bagger when his fourth-inning smash deflected off first base for a run-scoring infield hit.

“They got the big hits with runners on,” Lovelace said after W-S was held to six singles. “We couldn’t get big hits.”

None was bigger than Wilhelm’s back-breaker against reliever Christian Bodenheimer in the last of the fourth. With the sacks full, he brought in all the groceries — whipping a three-run double into the left-field corner that gave Rowan a 10-2 advantage.

“It was a hanging curveball,” Wilhelm said. “I thought it was going to break away from me, but it broke down. I was just trying to stay in the gaps. That way, when you get something off-speed, you shouldn’t be fooled.”

The beneficiary of Rowan’s outburst was winning pitcher Hayden Setzer, the unbeaten southpaw who won his fourth decision. He yielded two runs on five hits and struck out seven in a more-sturdy-than-spectacular five-inning stint. Brett Graham relieved and allowed an unearned run before lefty Brandon White procured the last three outs.

Rowan nourished its lead to 15-2 with five runs in the bottom of the sixth. The last two crossed when Lee Poteat’s lost-in-the-twilight fly ball to center field became a two-run double.

“It’s not just the starters,” said Wilhelm, a part-time starter who knocked in four runs. “Even our bench players can come in and get a big hit. We’ve got people waiting on a loaded bench.”

Lovelace threw Post 342 a complimentary parting shot. “Rowan’s a very solid team,” he said. “They’re not going to beat themselves.”