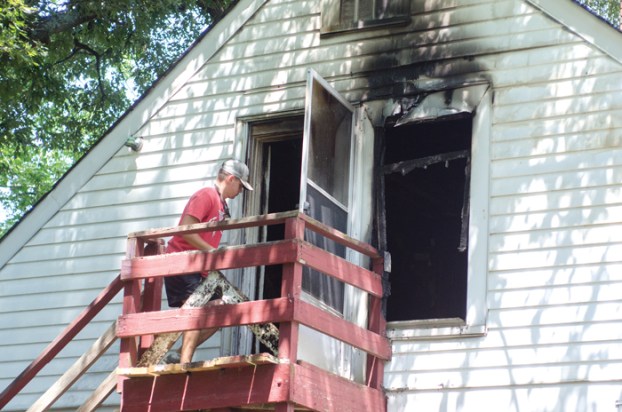 KRISTI CRAVEN/ SALISBURY POST Hunter Brown, son of the property manager, walks to the upstairs floor of a duplex near Spencer that is charred on July 6, 2017 after a fire started the night before. KRISTI CRAVEN/ SALISBURY POST The upstairs floor of a duplex near Spencer is charred on July 6, 2017 after a fire started the night before.

SPENCER — Fire investigators said Thursday that an overnight fire that claimed the life of a man and his two dogs was caused by an overheated extension cord plugged into an air conditioner at a duplex apartment.

The man and two boxers were unable to get out of the apartment, they said.

The fire occurred about 10:35 p.m. at 109 Long Ferry Road. The investigation was still in the early stages.

The residences were once a single-family home that was converted into apartments. The downstairs occupants smelled smoke, walked outside and saw flames coming from the back of the building.

“They tried to get in the house but couldn’t because of the heat and smoke,” said fire investigator Deborah Horne.

When firefighters arrived, they searched the property and found the man inside. Firefighters and rescue personnel performed CPR and other lifesaving measures, but Klawitter died at the scene.

“We are praying for the family,” Horne said.

The second-alarm fire was under control rather quickly. Rowan County Animal Control also responded to the scene and removed the dogs.

The downstairs unit had water and smoke damage, and two adults and one child were displaced, Horne said. The Hanford Dole Chapter of the American Red Cross is assisting the family.

One of the residents of the downstairs unit, who asked to remain anonymous, told a Post reporter that he first believed the smoke was coming from inside his apartment. After going outside, he saw flames coming from an upstairs window. He said he tried to kick the door in but was overcome by smoke and fire. He yelled out to his neighbor but got no response, then called 911.

His family has lived in the apartment for two months.

Property manager Steve Brown was at the property waiting on the all-clear to go inside with the family to check on damage and recover some items. He said Klawitter had lived there a couple of years.

The house was built in 1940, according to Rowan County tax records.

This is the first fire fatality in the county this year.