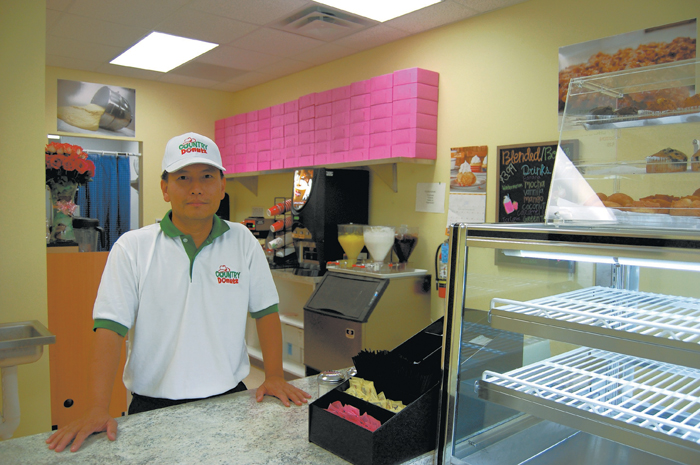 Country Donutz owner Reggie Earl stands in front of the pink boxes that he serves his made-from-scratch donuts in. Jessica Coates/Salisbury Post

Aside from the many varieties of doughnuts that Earl and an employee make from scratch daily, Leng said the business has something else to offer: pink boxes.

“It just, the color, it makes it bright, versus the white box. So when people carry it, it’s bright and they can look at the box (and it) calls people’s attention. Now it’s like the new symbol of doughnuts,” Leng said.

So far, the pink box is a symbol of doughnuts only in Los Angeles, a city that has become an epicenter of doughnut culture in recent decades and was also Earl’s place of business for more than 15 years.

Leng and Earl are hoping it will catch on in Salisbury as well.

The pink box tradition began in Los Angeles in the late 1970s when an influx of Cambodian refugees moved to California to escape their country’s two-decade-long civil war.

Earl and Leng were two of those refugees.

“During the civil war, all my family fled to the United States looking for a new lifestyle,” Leng said. “So they learned how to make doughnuts. They kind of passed (it on) from one person to another person. Like my uncle, he learned from his friend and his friend learned from the person who learned from the company that makes doughnuts.”

The pink boxes cost several cents less to produce than the traditional white boxes that had dominated the Los Angeles market. As refugees began opening doughnut shops, they switched to pink boxes in order to cut costs.

From there, the pink box trend caught on.

“At the beginning, I saw everyone use pink boxes, so I just followed them,” Earl said. “But they have white boxes, all of that stuff, (but) people like pink. So I brought pink boxes over here to Salisbury.”

Aside from the pink boxes, Leng said, the variety and freshness of the shop’s doughnuts sets it apart from the local competition.

“They have to be fresh-made daily. We don’t keep (them) for the next day. We have more choices that are different. So when you look at our product and their product, I think it’s going to be different products,” Leng said.

Since the store — located at 475 Jake Alexander Blvd. — opened June 30, Leng said it has stayed busy.

Earl said he has been happy to meet all of his customers.

Asked why he moved from California to North Carolina, Earl said that when he came to visit Leng — who lives in Winston-Salem — he could not believe how nice the people were.

“I just want to say to people in Salisbury that I think they’re very nice people. I’d like to meet them all,” Earl said.

Earl lives with his nephew in Winston-Salem but plans to move to Salisbury in the next month.