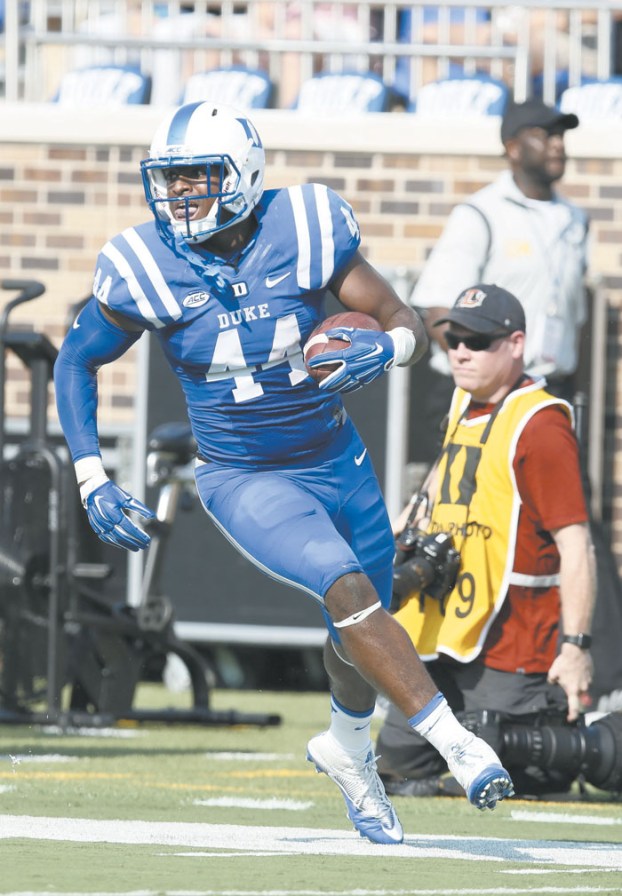 FILE - In this Sept. 10, 2016, file photo, Duke's Joe Giles-Harris (44) runs with the ball following an interception against Wake Forest during the first half of an NCAA college football game in Durham, N.C. Giles-Harris is proud that he started 12 games as a redshirt freshman at Duke. During his sophomore year, he wants to improve on that number _ and the only way to do that is to lead the Blue Devils back to a bowl game. (AP Photo/Gerry Broome)

DURHAM (AP) — Joe Giles-Harris is proud that he started 12 games as a redshirt freshman at Duke. During his sophomore year, he wants to improve on that number.

Of course, the only way he can make 13 starts is if the Blue Devils qualify for a bowl — something they failed to do in the linebacker’s first season on the field.

Giles-Harris led all Atlantic Coast Conference freshmen with 107 tackles and was second nationally among freshmen with 8.97 stops per game. But those impressive stats felt a bit empty for a program that reached four consecutive bowls before taking a step back in 2016.

“The only number that stood out to me was, I started every game,” Giles-Harris said. “That was the most exciting part. Tackles and tackles for a loss, that really didn’t matter to me. I mean, at the end of the day, we won four games. I wasn’t really proud of it, but I was proud that I was able to play in all 12 games and that was an exciting thing for me, being my first season, I kind of shocked myself at that one.”

Giles-Harris was one of the bright spots in a rough year for a program that had grown accustomed to making the postseason. His tackle average ranked fourth in the league, and he had at least one tackle for a loss in nine games. Duke finished 4-8 for its first losing record since 2012, and missed a bowl for the first time since 2011.

“After last season, everybody’s taking a different mindset this year,” he said. “Everybody’s working a lot harder in the weight room and a lot harder out on the field, and it’s been exciting.”

The focus has been on quickness and fundamentals, he said.

“Getting back to doing things the right way,” he said. “There’s a lot of times you can kind of shortcut things because you can out-athletic somebody, but just getting back to looking at the right thing, watching film more in depth, and just being able to be a faster thinker on the field, things like that. Footwork becomes a big part of that. The faster you can move your feet, the faster you’re able to get away from people and make plays.”

Giles-Harris and middle linebacker Ben Humphreys figure to be among the leaders of the Duke defense this year. The roommates who both arrived in Durham in 2015 are the only pair of linebackers on the same team that each had at least 100 tackles and nine tackles for a loss last season.

“We just definitely keep getting closer and closer — I could tell you a lot more about Ben than you think I would know,” Giles-Harris said with a laugh. “It’s just something that’s helped us. I trust him on and off the field, and it shows on the field. … It’s something we’re fortunate to develop, and it’s helped on the field because we know how each other thinks. We know when one person does this, how the next person should react. … He’s probably one of my best friends and it’s exciting to play with and live with somebody like that.”