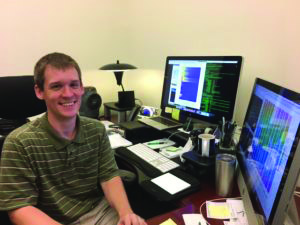 KANNAPOLIS — The goal of many students when they graduate from high school is to get as far away from home as possible.

Some students in Concord and Kannapolis are finding that the best opportunity for careers in science is right in their own backyard at the N.C. Research Campus.

Over a decade ago, Kevin Lambirth drove down East First Street on his way to A.L. Brown High School in Kannapolis. Today, Lambirth travels the same road on his way to the Research Campus where he works at the University of North Carolina at Charlotte’s Bioinformatics Services Division.

A 2006 A.L. Brown graduate, Lambirth’s family has been in Kannapolis for generations. His grandfather worked at Cannon Mills’ Plant 4 from 1956 to his retirement in 1990. His parents worked at the mill during the summers of 1973 and 1974.

Lambirth had different options. He finished high school and commuted from Kannapolis to Pfeiffer University and UNC-Charlotte for his undergraduate and graduate degrees.

He remembers that biology was his favorite class in high school, but even in middle school he enjoyed learning about the natural sciences.

“I always had a fascination with science, but I still didn’t know what I wanted to do when I was graduating high school and starting college,” he said. “I seriously considered software development before I ultimately decided on biology at Pfeiffer.”

At Pfeiffer, Lambirth studied soybeans in collaboration with SoyMeds, a UNC-Charlotte spinout company. Soybeans are a stable and rich source of protein that provide a potential basis for plant-based therapies like edible vaccines. These type of vaccines are shelf-stable and do not require refrigeration, which could benefit developing countries without reliable distribution chains.

After graduating from Pfeiffer, Lambirth continued to work for SoyMeds as a lab technician until he started graduate school in biological sciences at UNC-Charlotte in August 2011. He received his PhD just over four years later and then joined the Bioinformatics Services Division as a postdoctoral researcher in genomics and bioinformatics, a field that combines biology and computational science to analyze scientific data.

As a bioinformatician with a strong background in molecular biology, Lambirth has a unique perspective on the intersection between the two fields.

“It’s more than just being handed sequence data and doing the computation,” he said. “We need to know the experimental design when we’re comparing samples. It’s very important to be aware of any confounding factors that may be explaining certain patterns.”

At the Bioinformatics division, Lambirth learned a lot of programing before embarking on the Urban Environmental Genomics Project. The project focuses on the spread of antibiotic resistance of bacterial species in municipalities via wastewater treatment.

From first finding a love for science at A.L. Brown High School to digging into complex bioinformatics and genomics at the Research Campus, Lambirth has never lost his passion for his hometown. “I’ve been here my whole life. I have nothing but warm feelings for this town, and I wish nothing but the best for this campus.”

Diagnosed at age 4 with multiple sclerosis, Discovery MS intern Briana Landis is a passionate advocate for people with MS and the research that can improve their lives.

Neurologists told her parents that it was impossible for her to have multiple sclerosis. By age 5, there was no doubt that her severe headaches and episodes of vision loss were caused by the autoimmune disease. Fifteen years later, Landis is interning at Discovery MS, a nonprofit research initiative housed in the David H. Murdock Research Institute on the N.C. Research Campus.

Discovery MS is dedicated to developing prognostic and diagnostic tools for people with MS. The organization was started by Simon Gregory, whom Landis met at the grand opening of the Research Campus in 2008. Landis grew up in Kannapolis and is an A.L. Brown High School graduate and the 2015 valedictorian. She starts her junior year at Meredith College in Raleigh in the fall.

At Meredith, she studies biology and is an undergraduate researcher investigating probiotics, the gastrointestinal tract, and how storage methods impact probiotic viability.

“The medicine I take regularly for my MS weakens my immune system,” Landis said. “My mom makes me take probiotics to make up for it, and I’ve always wondered if it’s truly effective.”

When she’s not in class, running or at the lab bench, Landis is a spokeswoman for people with MS, making appearances and giving talks at MS events in Raleigh. At one of these events, she reconnected with Gregory. The reunion led to a summer internship. Landis is working at Discovery MS with Sabrina Cotte, a senior staff scientist.

“It’s nice to have one extra pair of hands, an extra brain,” Cote said about her new intern. “Training the next generation of researchers is just one of the responsibilities you have as a scientist.”

Since the program’s launch in November, Gregory and Cote have been busy analyzing metabolomics and genetic data, writing scientific papers for publication and raising funds. Alongside Cote, Landis is learning about genotyping and working on an MS questionnaire. The questionnaire is designed to connect environmental factors, health history, and genetic factors in ways that inform the research of Discovery MS’s scientific collaborators.

With all she is doing in life, it may be hard to imagine that Landis has MS. She has a form of MS that is called relapsing-remitting, meaning there are only temporary periods of time where she has flare-ups of MS symptoms.

“I can’t see out of one eye when it’s the worst,” Landis said. “Luckily, it’s been over 10 years since this last happened.”

Increased stress makes her MS worse, she says. She struggles with migraines and sometimes experiences the sensation of “bugs crawling up and down” her back.

Despite the challenges, she is driven by one thought.

“Obviously I have a big goal in mind — a cure,” Landis said. “But it’s not just for me. It’s for all the people I’ve ever met who are living with MS.”