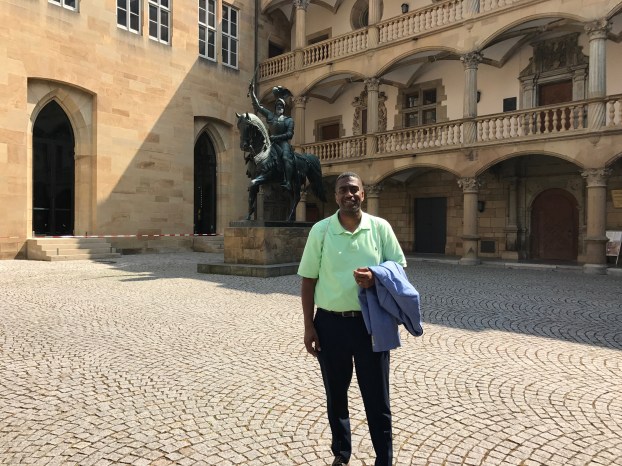 Rowan-Salisbury Teacher of the Year Anthony Johnson traveled to Germany with 29 other N.C. educators with Go Global NC — which connects North Carolina teachers to the world . Johnson's trip was sponsored by the Blanche and Julia Robertson Family Foundation. Anthony Johnson, center, a Rowan-Salisbury School teacher, recently traveled to Germany to learn about the country’s education system. He is pictured here at Checkpoint Charlie.

By Anthony Johnson
On June 16, thanks to the Blanche and Julian Robertson Family Foundation, I embarked on a journey of a lifetime with 29 educators from around the state.
The goals were to gain insight into Germany’s history, culture and education system; gain a better understanding of technological innovation and renewable energy practices in German; and to use technology to collaborate with other program participants on ways to implement global perspectives and technology into the classroom.
Go Global NC connects North Carolina teachers to the world and provided an excellent experience that I will never forget.
During our 10-day tour, we visited two schools. The Bavarian schools are still in session until the first week of August. We observed several classrooms on various grades levels and taught a lesson about North Carolina at a high school.
The group also met with the minister of education, professors and students from the University of Freiburg and Humbolt University. There, we were introduced to the German school system.
The Germans place a high bar on individuals desiring a career as a teacher. An undergraduate degree is not enough to become a teacher in Germany.
The standards are very high but so is the pay. Teachers don’t have to work two jobs to survive.
At Freiburg, the group got to sit down and talk with refugees from Syria, Iraq and Afghanistan who were studying at the university.
As a science teacher, the highlight of the trip for me was visiting the city of Freiburg and St. Peter. We got a guided tour of the Vauban neighborhood. The entire area was built on a site of a former French military base. The neighborhood is a model for sustainability.
St. Peter is a small community in the Black Forest mountains that produces its energy using the wind, solar, water and thermoelectric. To stand under a wind turbine on a mountain in the Black Forest in Germany was a science teacher’s dream! The experience was just unbelievable.
Our last few days were spent in Munich. On the first day, we visited a BMW plant to learn about their apprentice program. It was incredible to see 16-year-old students building parts and models of cars.
Germany has a vocational training program as an alternate to higher education. Students after middle school spend two-thirds of their time learning at a business and one-third in school. The students are doing some fantastic work.
On our Saturday in Munich, we visited the Dachau Concentration Camp Memorial Site. More than 200,000 people were imprisoned there and more than 41,000 murdered. The pictures were graphic and too much for some of us, including me.
We closed out the day to explore on our own in Munich.  We broke into smaller groups and visited museums and historic sites and purchased souvenirs. A few us rented bicycles and cycled around the city.
Go Global NC provided a fantastic opportunity for professional growth. Touring a foreign country and learning about their education system, renewable energy practices and history was simply an unforgettable experience.
I cannot wait until the school year starts to share and implement what I learned with my students and teachers.
Anthony Johnson is the 2016 Rowan-Salisbury Teacher of the Year and 2017 Regional Teacher of the Year for Southwest N.C.
You Might Like

Dart to the continuing spread of fentanyl and heroin, which together killed more than 30 people in Rowan County last... read more