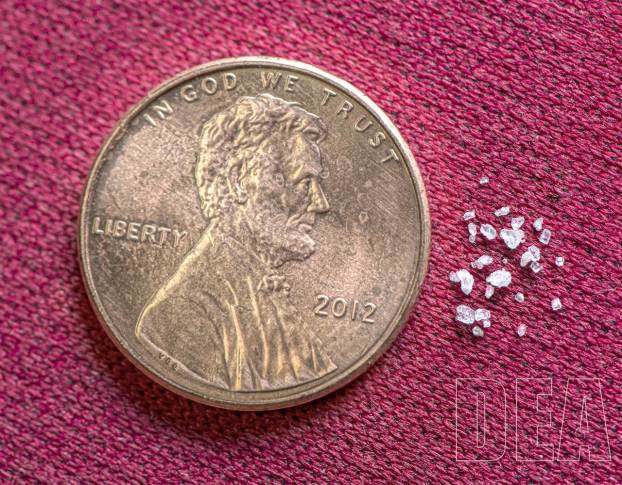 A lethal dose of fentanyl, compared in size to a penny. (Drug Enforcement Administration) Dart to the continuing spread of fentanyl and heroin, which together killed more than 30 people in Rowan County last year. Fentanyl, a synthetic opioid, is a highly potent painkiller when used effectively but a lethal drug in the hands of addicts. In Rowan in 2016, according to the state’s chief medical examiner, 16 people died from an overdose of fentanyl or drugs that resemble fentanyl and 15 fatally overdosed on heroin.

Last week the Salisbury Police Department put out a public warning about the dangers of fentanyl after dealing with several overdose calls. Fentanyl is made in illegal labs in China and Mexico, trafficked to countries like the U.S., laced with heroin and sold to buyers who don’t know the drug is there.

What’s worse, a new strain of fentanyl has surfaced in Georgia that is resistant to lifesaving overdose medications. Georgia has also seen a wave of overdoses caused by fake Percocet pills.

The illicit drug business is alive and well, and it has no qualms about killing its customers.

Laurels to training for cardio pulmonary resuscitation — CPR — and to Brad Jackson of Salisbury for quickly and effectively putting his training to use.

The day after Jackson took a CPR class, he revived 13-year-old C.J. Dickerson, found at the bottom of the pool. “We’ve always said, ‘You just never know when you’ll need it,’” said Jill Nothstine, who helped train Jackson. “… We really feel passionate that everyone physically capable should know how to do it.”

If Jackson’s experience has inspired you, contact the American Red Cross. The agency offers a course for adults that includes CPR training as well as first aid and how to use an automated external defibrillator — AED — in an emergency. Immediate CPR followed by defibrillation has proved very effective at saving lives. As Nothstine said, you just never know.

Editorial: And still we need more

Some West End residents may not want the Power Cross Ministries’ youth program to use Miller Recreation Center, but the... read more