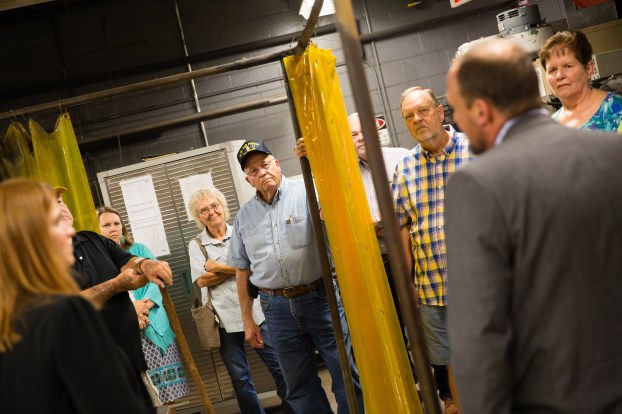 Members of RCCC's class of 1967 recently returned to the school after 50 years. Submitted photo

SALISBURY — A lot has changed since Larry Clodfelter graduated from what is now Rowan-Cabarrus Community College.

But then again, 50 years will do that.

The nine graduates of the electronics technology Class of 1967 attended what was then Rowan Technical Institute. Their courses were taught in Building 100 on the North Campus, the only building at the time.

“Building 100 had a machine shop, welding and auto repair, and they also offered mechanical engineering and fire technology, I think,” said Clodfelter.

He and fellow graduate Tommy Blanchard planned a recent reunion.

The graduates returned to North Campus after 50 years to celebrate. The group has continued to get together every five years since graduation.

“We ultimately became more than colleagues and classmates,” Clodfelter said. “We became a group of friends, including our instructor, Mr. Matt McCullah. He joined us for our reunions, too, up until his passing.”

After graduating with associate degrees, the students went off to work. Clodfelter went to Bell Labs, but some of his classmates found themselves at Duke Power, Stanford GE, Electrical Design and other companies.

“I made a career out of what I learned at Rowan Tech,” said Clodfelter.

Clodfelter thinks back fondly on his time at Rowan-Cabarrus.

“I remember I was banned from the library at one point for not tucking in my shirttail. I don’t think that happens to students today,” he said.

The alumni toured the North Campus and then visited together over a meal.

“In the last 50 years, the growth has been enormous. The college sees so many students now,” said Clodfelter.

The college says it welcomes graduates to stay in touch or visit campus.