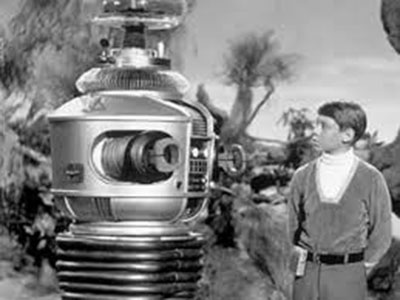 On "Lost in Space," which aired from 1965 to 1968, the robot and Will Robinson, played by Billy Mumy, were constant companions.

As with all tech advances of the past 300 years, we have variations on the same “Chicken Little” scenario. Yes, we need jobs, but we need people willing to step up to the challenge in the emerging fields and earn those jobs. The day of middle-class factory work is rapidly coming to an end in this country, and regardless of what today’s politicians promise ad nauseam, they are never coming back to this country.

We have a number of pure Catch 22 scenarios:

1 – We want everything to be cheap but we also want to be paid disproportionate to the value of what we produce.

2 – We want high quality health care for free or virtually free (the government can pay for it, right?).

3 – Rowan County doesn’t attract much new industry primarily because of our work force, not because we have a bad location, a poor tax system, no water system or bad internet (Fibrant?).

Education is the way forward — always has been. Now we just need the folks willing to move forward. When that happens, things will change.

When Henry Ford needed a workforce, he didn’t say to the blacksmiths and horse groomers that they should go and learn how to build cars and when they did he would give them jobs. To the contrary, he trained them, and paid them full wages while he did so. He promised them that if they stayed working for him, he would take care of them if they got sick or too old to work.

There will be plenty of jobs in the future, but the question is, who will do those jobs if it requires of them investment beforehand, and they have to accept being discarded afterwards?

“We owe all progress to those who do not adapt.”

Jörg Schauer is a watchmaker. Not a particularly high tech business; but he nails this topic. This is not about robots taking away jobs, but about how people are not adapting to the changes going on around us.

To say that robots are after our jobs, and we should not allow this technology to move forward is very short-sighted. It is the equivalent to hiding our head in the sand. To be honest, it is part of the problem as to why this area has not grown or even maintained status quo. We would rather have it the way it was, back in the Henry Ford days.

Those days are long gone. The quicker we realize this and the faster we take our head out of the sand, the quicker we get back on our feet as a city and county. Do you really think other countries or regions are not going to implement technologies like this? When they do, where will that leave us? Even further behind.

Mr. Barrow is spot on: “Education is the way forward — always has been. Now we just need the folks willing to move forward. When that happens, things will change.”

What are you doing to improve yourself, and make yourself more “employable”?