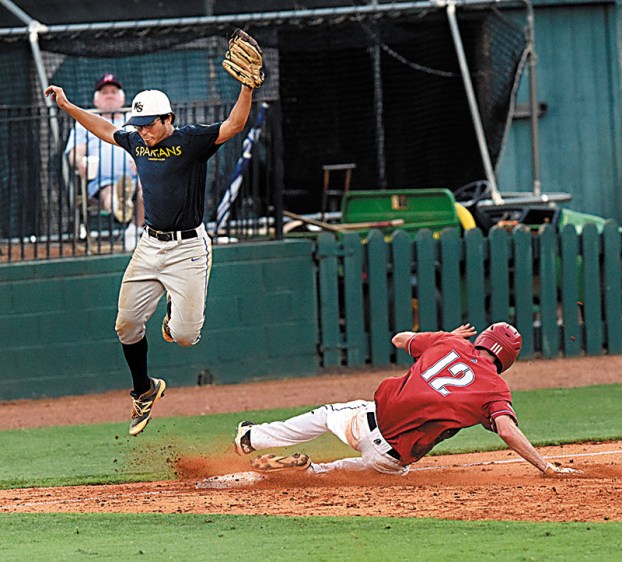 Rowan's Henderson Lentz 12 slides safely into 3rd base as Winston Salem's Chris Mautos 4 jumps for the high throw that went over his head. photo by Wayne Hinshaw, for the Salisbury Post

Rowan rallies in bottom of the 9th, beats Winston-Salem

SALISBURY — Rowan County has penned another chapter in the summer’s most-intriguing story.

Only this time, the plot didn’t involve double-digit hits, runs, RBIs or non-stop traffic on the bases. Post 342 used Brycen Holshouser’s pinch-hit, bases-loaded single with two away in the bottom of the ninth inning Tuesday to edge visiting Winston-Salem, 4-3, in its second-round playoff opener.

“It’s kind of shocking,” starting pitcher John Owen said after Rowan (25-1) won its seventh straight contest. “Everybody expects us to come out and score lots of runs, but we had to grind out at-bats tonight. It shows we can win late-inning ballgames, not just 10-run rule games.”

Owen showed more than that. The right-hander worked quickly and with visible confidence in a Yankee-Doodle-Dandy performance — hurling seven shutout innings, scattering three hits and striking out seven while walking none.

“The hitting didn’t come around for John like we’re all used to,” outfielder Lee Poteat said after Rowan launched the first volley in this best-of-five series. “But he pitched as good as ever.”

Owen’s feat went unrewarded when Rowan’s bullpen coughed up a 3-0 lead in the top of the ninth, when Winston-Salem (9-12) scored three times to tie the score. The winning pitcher was Joe Harrison, who fanned the only batter he faced — Post 55 catcher Drew Epling with the bases loaded and two men out.

“On a 3-2 curveball no less,” Rowan coach Jim Gantt said with a post-game eye roll. “You gotta have some (guts) to throw a 3-2 breaking ball with the bases loaded. But a walk in that situation is one run. If he serves him up, you’re looking at multiple runs.”

For seven innings, Owen was matched zero-for-zero by Winston-Salem’s Jimmy Hylton, a tall right-hander who wilted after allowing Trevor Atwood’s run-scoring single in the sixth and two additional runs — one earned, one not — on Hayden Setzer’s eighth-inning sacrifice fly.

“Jimmy was phenomenal,” said Post 55 coach Mike Lovelace. “We’ve played four games in the last three days and he’s our No. 3 arm. I’m proud of him and all my guys, because Rowan hasn’t been in a game like this all summer.”

He’s right. Rowan, which has dispatched eight opponents by the mercy rule and cracked double figures 16 times, had to scratch and claw for this one. It’s ninth-inning rally against reliever Christian Bodenheimer — a Junior Legion call-up — began with two outs and no one aboard in the last of the ninth. Poteat and Owen coaxed walks, prompting Lovelace to summon infielder Nick Mandragona to the mound. Mandragona hit Atwood with a pitch to load the bases, then fell beind 2-and-0 to Holshouser, inducing another change. Will Rice entered and delivered a 3-2 pitch that Holshouser belted over the head of drawn-in right-fielder Jack Thomas, setting off another Newman Park celebration.

“That’s always a catch-22 in those situations,” Gantt said. “Do you play your outfielder straight up or do you bring him in? Or if you’re back deep and they hit a little flare in front of you, that kills you too.”

Lovelace was disappointed, but to his credit, made no excuses. “It just happens,” he said. “They put pressure on us. Eventually, something’s gonna happen.”

Poteat, who scored the winning run, indicated it was a well-struck ball. “Yeah, their outfielders were all in,” he said, “but Brycen put a good swing on it. If it didn’t land on the warning track, it landed right before it.”

NOTES: Game 2 of the series is scheduled tonight at Mount Tabor High School. Gantt said Olen Stamper will start for Rowan. Winston-Salem will counter with Chris Moutos, who played third base and collected a sixth-inning single. … Poteat had RC’s only extra-base hit, a double in the eighth. … Post 55 outfielder Jeffrey Davis, Jr. drilled a clutch, two-out, two-run double against reliever Pearce Wilhelm that tied the score 3-3 in the top of the ninth. … Rowan’s Brandon Walton made his first appearance since he stretched a hamstring against Kannapolis on June 23, pitching a 1-2-3 eighth inning.