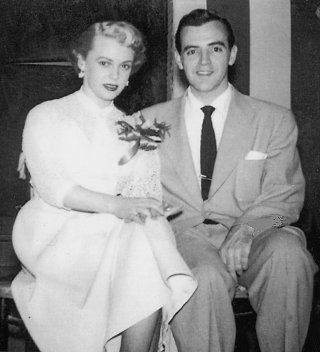 Harry Prime with Peggy King with the Ralph Flanagan Orchestra.

Letter: Harry Prime had a style all his own

Sad news. One of the best big band singers, Harry Prime, passed away June 15 at age 97. Harry sang with the Randy Brooks, Jack Fina, Tommy Dorsey and Ralph Flanagan orchestra, recording most of his songs with the Flanagan band.

His biggest hit was with the Dorsey band. “Until” was a million seller, but many recordings with Flanagan revealed a top quality voice with impeccable phrasing. “Dear Hearts and Gentle People,” “Oh, What a Beautiful Morning,” “Nevertheless” and “Just One More Chance” (my personal favorite) are excellent examples of Harry’s vocal prowess.

He belongs right up there with the likes of Bob Eberle, Billy Eckstine, Dick Haymes, Frank Sinatra and Perry Como.

I’ll remember Harry for his kindness to me, just a fan, and for letting me take a picture of him and Flanagan’s female vocalist, Peggy King, when they worked with Ralph back in 1951.

RIP, Harry Prime. Your congenial personality will also be remembered along with your unique singing style.

Editorial: And still we need more

Some West End residents may not want the Power Cross Ministries’ youth program to use Miller Recreation Center, but the... read more