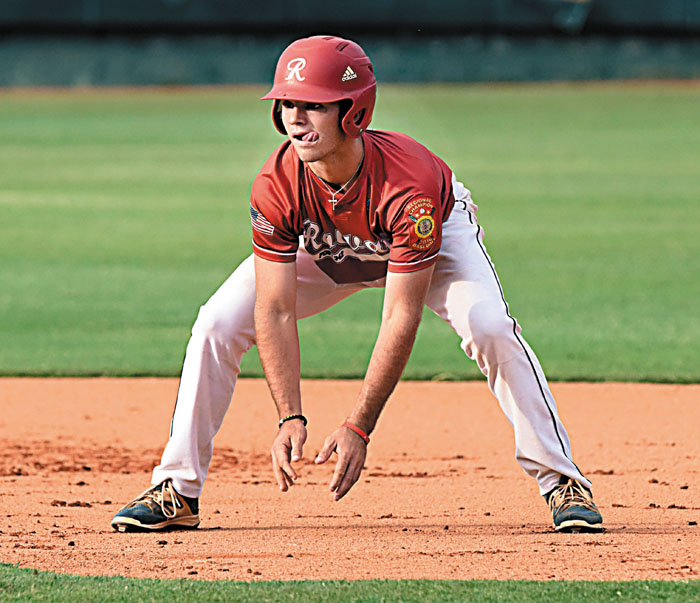 WINSTON-SALEM — In a program with deep and storied history, Rowan County center fielder Chandler Blackwelder’s game on Wednesday night at Mount Tabor High’s Carl R. Sapp Field will be among the most legendary.

In one night, Blackwelder matched his his homer total for all last season.

In seven trips to the plate, Rowan’s leadoff man went 5-for-6 with three homers, two singles, a walk and seven RBIs. The homers were his team-leading fifth, sixth and seventh of the season. Winston-Salem got him out on his at-bat that opened the game. He was looking away and got jammed on an inside pitch. After that, he was trouble.

For a long time, UNC Pembroke signee Blackwelder carried the load for Rowan. He drove in the team’s first six runs in a 16-2 victory over Winston-Salem that provided a two games to none lead in a best-of-five series.

“But  give a lot of credit to Tanner File and Brett Graham,” Blackwelder said. “They were on base all night in front of me. They gave me confidence and a lot of opportunities to get RBIs.”

Rowan (26-1), which survived a cliff-hanger with Winston-Salem (9-12) in Game 1, will seek the series clincher tonight at Newman Park.

Blackwelder launched a two-run homer to right-center in the fifth when he was given a green light on a 3-and-0 count. That gave Rowan a 3-0 lead.

“They gave me the swing-if-it’s-good sign and I got something that was down the middle and pretty slow,” Blackwelder said. “I was able to put a good swing on it.”

Blackwelder pulled a three-run homer to left to make it 6-1 in the sixth. That one was on an inside changeup. That blast came with two outs and was a backbreaker.

He homered to left again to lead off the ninth.

“Blackwelder hit the heck out of all three of the homers,” Rowan coach Jim Gantt said. “And he wasn’t the only one. We hit a lot of balls hard tonight.”
Right-hander Chris Moutos, coming off an outstanding junior season at Mount Tabor High with six wins and an ERA of 1.75, held Rowan in check until the third inning. File and Graham, the No. 8 and No. 9 hitters, delivered one-out singles, the first two hits for Rowan, before Blackwelder sent a single bouncing up the middle for a 1-0 lead.

Rowan starter Olen Stamper held that 1-0 advantage until the fifth. That’s when Graham doubled off the right-field wall and Blackwelder homered to stretch the lead to 3-0.

Winston-Salem (9-13) broke through for a run against Stamper in the bottom of the fifth to get within 3-1, but then Blackwelder struck again. Hits by Chandler Lippard and File set up Blackwelder’s two-out, three-run homer.

“Stamper reached the pitch count that we were going to let him throw, the same as John Owen did in the first game of the series,” Gantt said. “Stamper did his job, gave us a chance to win. We’ve got other guys who were ready and we’ve been preparing them to pitch all summer. We got them in there, and Griffin Myers and Brandon White did a nice job.”

Winston-Salem picked up its second run in the sixth when Myers uncorked a wild pitch, but third baseman John Owen threw out a runner at the plate.

It was still a ballgame — 6-2 — heading to the eighth, but then Rowan battered the Winston-Salem bullpen for five runs in the eighth and five more in the ninth.

Blackwelder had a single in the eighth, and Lee Poteat drilled a ball to the left-field wall for extra bases and chased home the runs that made it 9-2. RBI hits by by John Owen and File made it 11-2.

Then Blackwelder’s third homer triggered another lengthy Rowan rampage in the ninth.

File and Graham combined for six hits and a walk at the bottom of the lineup. Graham rifled two doubles.

“Those guys didn’t just have hits, they had big hits that got us going,” Gantt said. “And Graham and (catcher) Trevor Atwood had really good games in the field. They made heads-up plays that were crucial at the time.”

NOTES: Brandon White pitched a sharp ninth for Rowan. … Winston-Salem catcher Drew Epling sustained a separated shoulder on a play at the plate in Game 1 and is out of action. … Brycen Holshouser, a pinch-hitting hero in Game 1, came off the bench on Wednesday and whacked a double. … Brandon Walton (hamstring) was back in the DH slot and batted fifth.