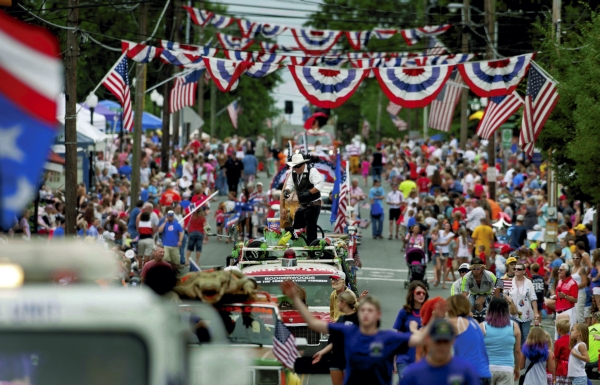 FAITH — The town of Faith is ground zero for Rowan County’s Fourth of July festivities on Tuesday, starting with a parade at 10 a.m.

Cheerwine, celebrating its centennial this year, will lead the procession as grand marshal.

Scores of parade floats and units later, there will be a flag raising with Neal Wilkinson singing the national anthem.

Miss Rowan County Veteran will be crowned, with Buddy Poole serving as master of ceremonies.

Between the morning parade and fireworks at 10:30 p.m., thousands of people are expected to pour into the town of about 800 people.

This is the 70th continuous year of Faith’s big Fourth of July celebration. According to organizers, the celebration started  in 1947 when Mayor Ray Lyerly suggested a community project involving all Rowan County residents.

Other highlights of today’s festivities include:

You might want to be strategic about parking. Downtown parking lots fill up fast. On Main Street, three churches have parking lots, and there are several lots around F&M bank and doctors’ offices.

Parade-goers should try to get to town before 9 a.m. Look for signs to direct you to parking lots.

As the crowd swells in the evening, golf carts will shuttle people from lots farther away.

Organizers ask spectators to be in town before 8 p.m. if coming for the fireworks because of heavy traffic. If you’re coming from Salisbury and all the lots appear to be full, travel through Faith and past Faith Lutheran Church; a big lot will be lit up on the left.

• In the 1940s and 1950s, when the celebration was getting its big start, games were big, including “sweet mess.” A silver dollar was dropped in a pan of thick homemade molasses. Contestants had to retrieve the dollar using only their mouths. According to local legend, the game was abandoned after a boy almost strangled to death.

• Folks loved the antics of the late Will Fesperman, described as “a painter and acrobat.” His part in the festivities was to climb a pole, stand on his head on top, drop a newspaper, and slide to the ground in time to catch the newspaper.

• Food is always a big draw at the Faith Fourth of July – from homemade pound cakes to pit-cooked barbecue prepared by the men. Women set up the food kitchen at midnight Sunday. Cakes and pies will be lined up with someone standing over them to fan a fly brush.

• Early on, the famous 3-cent pineapple sherbet was bumped up to a nickel and folks were told that this was “the holiday price.”

• By 1954, the celebration was attracting more people than any other event in Rowan County. In 1965, cards were sent to 1,400 women church members requesting baked goods to sell. With only 500 people living in Faith, the planners had to reach out for help to feed the thousands.

• In early parade days, Wiley “Wild” Williams and his cow delighted the crowd. Wild Williams either rode his cow in the parade or hitched her to a buggy. Either way, the cow and Wild William made a popular parade entry.