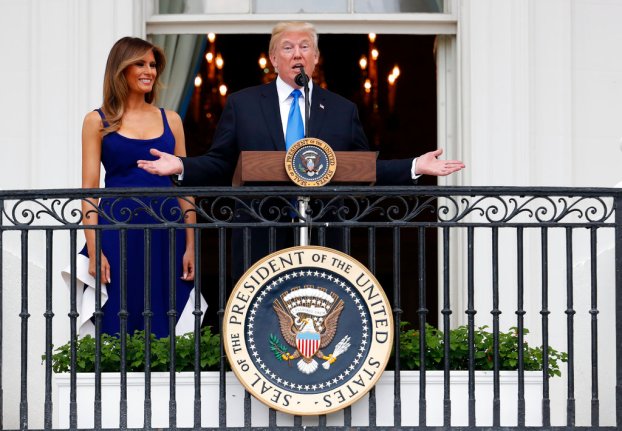 President Donald Trump, with first lady Melania Trump, speaks from the Truman Balcony at the Fourth of July picnic for military families on the South Lawn of the White House, Tuesday, in Washington. (AP Photo/Alex Brandon) From a Bloomberg View column by Albert R. Hunt:

It’s happening more and more: The phone rings and there’s an old acquaintance on the line, often a mainstream Republican, asking, “What’s wrong with Donald Trump?”

Instead of ranting in response, as I’d been doing for months, I’m now offering up a reading list. Here it is:

Cohn, the counsel to Sen. Joseph McCarthy during the anti-Communist witch hunts of the early 1950s, was Trump’s mentor until his death in 1986. After McCarthy fell from power, Cohn became a New York power broker, introducing Trump to politicians and helping him cut deals. Cohn was a shrewd, ruthless bully whose philosophy, Auletta wrote, amounted to this: “Everyone lies, smears, covers up, protects their friends. The rules of the game don’t count as much as winning.”

Trump adopted his role model’s attack-first-and-never-apologize tactics, on contemptible display last week with his vile slur against television anchor Mika Brzezinski. It’s easy to envision the embittered president raging late into the night about dishonorable enemies and feeble defenders, asking himself what Roy would do.

After the Watergate investigations brought down President Richard Nixon in 1974, Cohn said Nixon should have destroyed the White House tapes that were used against him. Today, as the beleaguered president stews in the White House channeling his mentor, he might hear, “Fire Mueller.” (That’s Robert Mueller, the special counsel investigating possible links between Trump and Russia and related matters.) …

“TrumpNation” captures Trump’s disregard for truths — even his own. During the George W. Bush administration, the book recounts, Trump noted: “America went from a country of openness and somewhat complacent and free, to a country that sadly is perceived around the world as a bully. … We could have been a country where the world embraced us. And instead the world hates us.”

Five months into his own administration, global trust in the U.S. has plummeted. ,,,

In “The Art of the Deal,” Trump brags about using “truthful hyperbole.” In his White House, an aide used the phrase “alternative facts.” These are euphemisms for lying. In his book, he describes the way he plays the media: “The press is always hungry for a good story. The more sensational the better.” …

Schwartz, who spent a year-and-a-half with Trump to write the book, now talks about the subject’s “complete lack of conscience.” He found Trump intellectually incurious and pathologically impulsive. It was, Schwartz told Mayer, “impossible to keep him focused on any topic other than his own self-aggrandizement for more than a few minutes.”

What was true in the 1980s remains true today. Just look at the president’s lack of interest in intelligence briefings and ignorance about the details of the huge Republican health-care bill now under consideration by the Senate.

These books and articles won’t tell you how Trump would react to a crisis on the Korean peninsula, or shed light on his Russian financial ties or reveal how much he knew about Russian interference with the U.S. presidential election last year. They offer only the vaguest hints of how he might respond to a domestic tragedy like the 1995 bombing of a federal office building in Oklahoma City by an anti-government militant, or to the 2015 massacre by a white supremacist of black parishioners in a Charleston, South Carolina, church.

But they do provide insight into the character of the president of the United States. And that’s where to find the answer to that question I keep hearing over the phone: “What’s wrong with Donald Trump?”

Hunt is a Bloomberg View columnist. He was the executive editor of Bloomberg News, before which he was a reporter, bureau chief and executive Washington editor at the Wall Street Journal.

Lincoln: Declaration gave ‘hope to all the world’

In the push and pull of U.S. history, one of the great debates has concerned the relative merits of the... read more