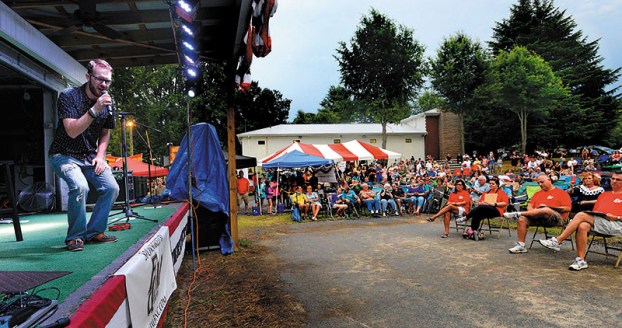 Rusty Fisher singing "Lift Your Head Weary Sinner" in the 19 and Over category in the Faith Idols. photo by Wayne Hinshaw, for the Salisbury Post

FAITH — Two are newcomers and the third is a seasoned veteran in the adult Faith Idol finals.

On Saturday night, Rusty Fisher of Faith, Rebecca Kulhawick of Rockwell and Ann Sprinkle of China Grove advanced to the finals of Faith Idol. Next, they’ll compete on Tuesday at 7 p.m. Winners receive cash prizes based on how they finish. First place gets $300. Second place receives $200 and third place receives $100.

Cash prizes are awarded in all age divisions.

Kulhawick and Sprinkle are newcomers to Faith Idol. Saturday was their first time at the event. For Fisher, however, Saturday was his 11th time at Faith Idol. This year, he’s aiming for a win.

His competitors even offered a word of encouragement after the first round on Saturday.

“This is the year,” Kulhawick told Fisher.

Fisher offered some advice to his fellow Faith Idol contestants.

“Change your song,” he said. “Everybody that’s won in the past has changed their song. It lets the audience see a different side of you.”

On Saturday, Fisher performed “Lift Your Head Weary Sinner.” Kulhawick performed “You Alone Can Save” and Sprinkle performed “Alabaster Box.”

Sprinkle joked that she’s unlikely to change her song.

“See, I’m over 50 so I probably won’t change my song because it’s the only one I know all the words to,” she said.

Saturday’s first round of adult competition began amid rain showers, which cleared out some audience members. However, most stayed until the end, after the showers cleared.

Adult competitors who did not advance to the finals on Saturday included: Tyler Helms, Lee Roberts and Sarah Schnurr. The adult competition is for people 19 and older.

FAITH — Huddled together behind a trailer stage right is a group of 10 hopeful teenage girls. With arms crossed... read more