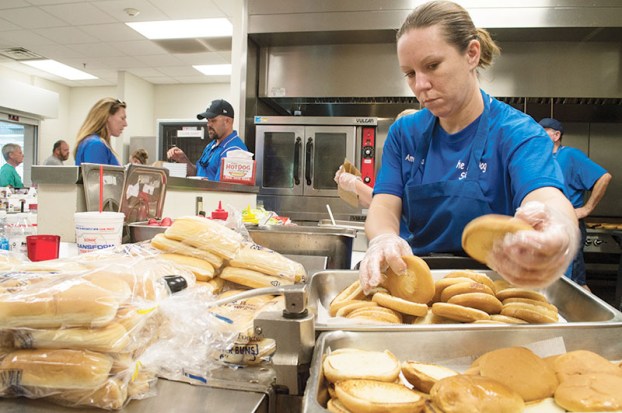 SALISBURY — The Hotdog Shack was open on Sunday, but it wasn’t at their usual location.

The Granite Quarry-based restaurant set up shop at Rowan Helping Ministries as employees, family and friends of the restaurant served food to guests at the homeless shelter.

It’s not the first time an outside group or the Hotdog Shack has served food at the shelter, but the restaurant brought some comforts of its Granite Quarry location and aimed to simulate the ordering experience of its restaurant.

Kris Mueller, resource development director at Rowan Helping Ministries, said Sunday’s dinner was different from a normal meal because shelter guests ordered their food according to a menu and waited for that food to be delivered to a table.

Hotdog Shack owner Jason Smith said his restaurant has been “unbelievable blessed” and serving food at the homeless shelter is an easy way to give back.

“We’re just blessed beyond measure. So, to be able to do this in an honor for us and not an obligation,” Smith said.

On Sunday, dozens of people filed through the line for hotdogs and hamburgers from the Hotdog Shack. Guests at Rowan Helping Ministries were allowed to order as much as food as they could eat.

On a normal day, shelter guests are provided three meals per day. Those who aren’t guests at Rowan Helping Ministries can receive a meal at lunchtime, said Cassandra Boyd, who works in the kitchen. Just before dinner on Sunday, for example, the shelter had served 142 people, Boyd said.

“We help other people and don’t know what their situation is or what they’re going through,” she said. “It’s important that we feed them with a good, hot meal and do show them hospitality.”

The reception from shelter guests to Sunday’s event was positive. Jack Sullivan, a guest at the shelter, said he passes the Hotdog Shack on his way to go fishing but never stops for a meal. Sullivan said he would eat at the Hotdog Shack before his next fishing trip.

On Sunday, Sullivan said he ate two burgers with a little bit of everything on them.

Angela Fisher responded simply when asked what she thought about Sunday’s dinner.

“I think the hotdogs are the bomb,” she said.

Roger “RJ” Ellenburg, who’s been a guest at the shelter for about two weeks, said he enjoyed the meal. It was a similar dining experience with a few differences, Ellenburg said.

Asked about Sunday’s dinner, Ellenburg added that families in need should take advantage of the services offered by Rowan Helping Ministries, especially the meals.

“I just know that some families out there are struggling to feed themselves and their kids and they should know that the shelter is one place they can come,” he said.