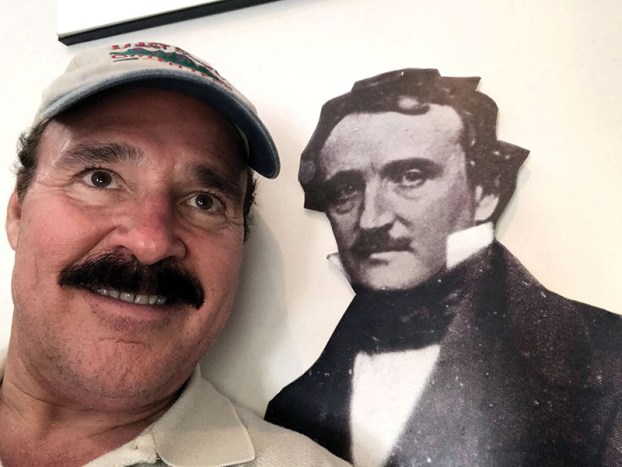 Whit Whitley takes a selfie at the Poe House in Richmond, Va.

I visited the Poe House today. No, not the poor house. It was a museum remembering one of Richmond’s great authors, Edgar Allan Poe. I don’t want to give away many of the treats you’ll encounter, so I’ll stay the course on quirky experiences.

You’ll learn more about Poe than he probably would have wanted you to know, especially regarding his romantic relationships.

Did you know that Poe only had his mustache a few years before his death? Seeing him without an upper lip cover is like not putting cream cheese on a bagel.

Most of the photos that we see of him came from rare daguerreotypes, a process that created an image on a silver plate using mercury vapor. Quite a dangerous process. That would probably explain why there are so many crazy early photos.

Various archivists found ways to save Poe’s family heirlooms. You’ll see early manuscripts of some of his works like the Purloined Letter and The Raven, as well as bygone pieces of furniture that probably wouldn’t win prizes at a modern furniture exhibition.

There is also a bookstore that carries everything from a bobble head of Poe, (I bought one), to DVDs, CDs, clothing, and other memorabilia that would have made Poe think, “Do these people really want to spend their hard-earned money on me?”

Poe never actually lived in this house that provides the entranceway to the tour. You can take an audio self-tour or a guided tour by a young woman, who reminded me of myself.  She told the various stories about Poe and put emotion in the voices of her characters.

The parking is free so use it for your visit and then use it as a free parking lot to browse local stores. I’m sure that they don’t check the cars since the lot is on a blind side to monitor, so watch out for street people that like to be curious.

I visited Hollywood Cemetery on Saturday. No, I am not in Los Angeles. This one is in Richmond, high upon the hills above the James River.

You constantly hear the sounds of rapids when you are on the south side. I doubt that anyone ever tried kayaking or rafting from the cemetery.

Being from the funeral industry, I had to take in this wonder that I had heard others talk about.

The day that I picked to go was sunny and hot. Many people in the park were either walking for exercise, had dogs on leashes who left their marks on graves to fertilize the grounds, or were curiosity hunters like myself, eagerly trying to find popular graves.

Without a map, finding those graves is like finding a needle in a haystack. One cemetery attendant told me there are now more cremation burials than funerals.

I do respect the dead but I will try to keep this story upbeat.

No wonder we had so many creative people in the past. They were learning skills instead of watching TV shows. I think America has lost a special art that most people today only see in flat bronze memorial parks.

This cemetery has an interactive website that you can use to find your way around the cemetery to see the graves of the famous — presidents Tyler and Monroe, Confederate President Jefferson Davis who has a very sad story of life in his background. There are even people there who made big money in Richmond like the Haxall family that made fortunes in flour. Didn’t affect Martha White, though.

Double feature: The Cauble sisters lead with their hearts

SALISBURY — The Cauble twins — Brenda and Linda — claim they are fraternal twins, but they sure seem identical. Could sisters... read more