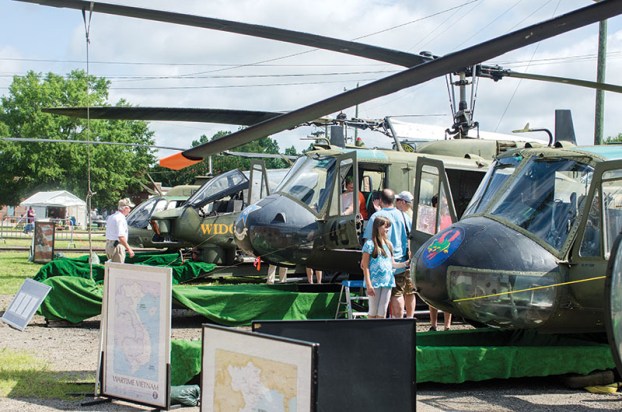 KRISTI CRAVEN/ SALISBURY POST Military helicopters are on display during the Military day at the Transportation Museum in Spencer on July 1, 2017.

“This is all about the Fourth of July, but we’re emphasizing the transportation part because it is a transportation museum,” said Kevin Cherry, Deputy Secretary of the N.C. Department of Cultural Resources.

The event is a great way to honor veterans while also celebrating the Fourth of July and the history of military transportation, said N.C. Transportation Museum Executive Director Kelly Alexander.

Among the crowd of reenactors and exhibits, was the N.C. Vietnam Helicopter Pilots Association. The group brought five different Vietnam-era helicopters to the event.

Jerry Phelps, who served in the Army during the Vietnam War, is a member of the association. He stood next to and described the history of the Hughes OH-6 helicopter, which he flew when he served. It’s a single-engine helicopter that transported soldiers, conducted surveillance and attacked enemy troops.

When Phelps flew the helicopter during the Vietnam War, he carried a mini-gun on the left side that could fire thousands of rounds per minute. A door gunner on the right would hold a M60 machine gun attached to a bungie cord, he said.

“And we carried three or four cases of hand grenades that we could throw out, too,” Phelps said.

Doors were optional when flying helicopters, he joked.

“On every helicopter I ever flew, the front doors and everything were off,” he said. “It helped with visibility. And, they’re not, if you get shot at, they’re not going to stop anything. They’d just be more shrapnel.”

Across the front lawn from Phelps was Eric Kalamaja, who spoke to event attendees about a jeep he owned and displayed on Saturday. Kalamaja said his jeep represents the glider class of field artillery used in World War II. Specifically, his jeep was used by the 101 Airborne Division.

Soldiers used the jeep for scouting. The jeep often carried a small howitzer. It would be dropped into an area on gliders. Alternatively, paratroopers would drop the jeep into an area in several pieces.

At times, airplanes were forced to fly under cloud cover to spot the landing zones. It was too low, Kalamaja said.

“A lot of these paratroopers, when they dropped, some of them didn’t make it because their chutes didn’t open,” he said. “A lot of them lost their equipment because they were coming in too fast.”

When soldiers became separated from their equipment, Kalamaja said, they would have to search for it. At times, soldiers found crashed gliders that contained jeeps and ammunition. Crashed gliders might also contain soldiers who died during the landing.

Kalamaja said he preserves the jeep because it’s part of the history of the unit he served with — the 101 Airborne Division.

In addition to items on display at the N.C. Transportation Museum in Spencer, visitors can also take trolley tours of the Salisbury National Cemetery and Confederate Prison Site. For more information about the event and other programs at the museum, visit www.nctrans.org.

By Josh Bergeron josh.bergeron@salisburypost.com CHINA GROVE — The Town Council on Tuesday approved a 2017-18 budget that pays for community... read more