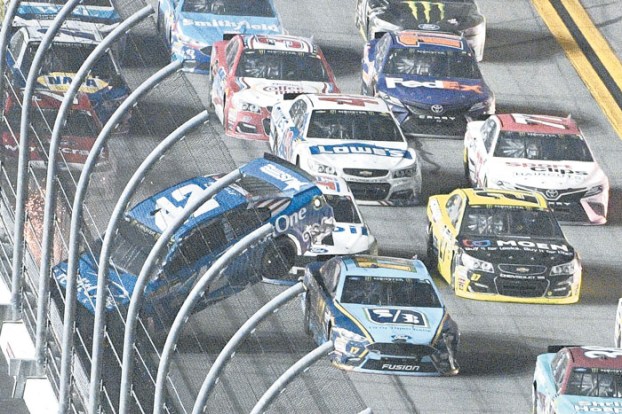 Stenhouse picked up his first career NACAR Cup Series win in May at Talladega. Just like last time, girlfriend Danica Patrick was there to greet him in victory lane — she had wrecked out shortly before and was the first person at his car window when he pulled in to celebrate.

“It validates what we did in Talladega,” Stenhouse said.

He earned this one for Roush Fenway Racing in a two-lap overtime sprint when leader David Ragan tried to block the field and lost momentum. Stenhouse squirted by and held on for the victory. He did it in a new car, too, because he wasn’t giving back the Ford he drove at Talladega to his first career Cup victory.

“I kept my Talladega car and told them to build a new one,” he said. “I have been coming here since 2008. I actually came in 2006 one time with Bobby Hamilton Jr. and it is cool to put it in victory lane and get our second win this year.”

Clint Bowyer was second for the second consecutive week.

“This bridesmaid thing sucks,” Bowyer said. “But second is better than third.”

Brendan Gaughan, AJ Allmendinger, Erik Jones and Chris Buescher rounded out a bizarre top 10. Many of the top contenders were knocked out in accidents, including Patrick, was seen kicking her car in frustration when she wrecked.  She also was out of the race and in street clothes when Stenhouse won at Talladega.

The race had hit full intensity in the final 10 laps with series points leader Kyle Larson slicing his way back into contention. He was chasing Ty Dillon for the lead with seven laps remaining when he moved up a lane to block Stenhouse.

There wasn’t enough room for Larson’s car in front of Stenhouse, and the contact turned Larson toward the wall and lifted his car off the track. It triggered an eight-car accident that collected Daytona 500 winner Kurt Busch and whittled down the field to just a handful of contenders.

NASCAR red-flagged the race to clean the damage, and went back to yellow after a stoppage of nearly nine minutes.

Dillon was out front as the leader, followed by Ragan, Allmendinger and Stenhouse, who despite driving under Larson’s airborne car, seemed to come out unscathed and restarted fourth.

Ragan got a good push from Allmendinger on the restart, but a spin by Denny Hamlin and Erik Jones brought out the caution to send the race into overtime. That’s when Stenhouse got his chance.

The race had been billed as the final at Daytona for Dale Earnhardt Jr, who is retiring at the end of the season. But he opens the door wider and wider every time he speaks about racing in the future, and winning the pole for Saturday night made him eligible for an exhibition race next February.

It set the stage for what felt like an Earnhardt kind of night, but he was forced into the wall riding in traffic early in the second stage and it seemed to end the feel-good story.

But Earnhardt worked his way back inside the top 10 and was sixth and pushing hard, demanding on his radio to know who was in front of Kevin Harvick, when he hooked Harvick to trigger a multi-car crash. Harvick said he got a flat tire right before the contact.

Earnhardt’s night was over, and he headed to the garage and a 32nd-place finish.

“It’s been a wild night,” Earnhardt said. “I didn’t anticipate this much action and this much torn up sheet metal.”

SHORT NIGHT: Joey Logano was knocked out in a multi-car accident after 72 laps. But, Logano was one of seven drivers to run in the rain postponed Xfinity Series race earlier in the day. Even with the wreck, Logano raced 430 miles in the two races.

UP NEXT: A Saturday night race at Kentucky Speedway, where Brad Keselowski won last year. He has won three of the last five races at Kentucky.

DAYTONA BEACH, Fla. (AP) — William Byron got his second win of the season, and this time he got to do it in front of his bosses.

Byron won his second consecutive Xfinity Series race on Saturday by leading a 1-2 finish at Daytona International Speedway for JR Motorsports. Byron raced to his first career Xfinity victory last weekend at Iowa, but team owners Dale Earnhardt Jr. and Rick Hendrick weren’t at the track to see him.

This time, Hendrick was the first person to the window of his car in victory lane. The 19-year-old became the youngest series winner at Daytona.

He used a push from teammate Elliott Sadler to clear the traffic on the restart. Byron was aided when Erik Jones was knocked out of line, and it gave Byron a clear lead.

An accident behind the lead pack caused the race to end under yellow.

“I have to go around one more time, right?” Byron radioed his crew about the procedures. He did a celebratory burnout and was interviewed live by NBC Sports on the frontretch for the crowd to hear in a new wrinkle from the network.

“This is so cool to win in Daytona,” Byron said. “We’ve had a great last three weeks. We’re bringing faster cars, executing better and as a team we’re getting more and more confident.”

Byron was prepared to stick around Saturday night ant watch the Cup race, which is being billed as the last at Daytona for retiring driver Earnhardt Jr. The owner of the winning Xfinity Series car was scheduled to start from the pole in Saturday night’s main event.

“Dale is so good here and I’ve watched a lot of his stuff, seen how he side drafts,” Byron said. “I never thought I’d win one of these things and I’ve kind of learned some things watching him.”

Rain postponed the race from Friday night until Saturday, and then a second weather delay of nearly two hours made for a lengthy 250 miles.

Seven drivers were scheduled to run both the Xfinity Series race and the 400-mile Cup race.