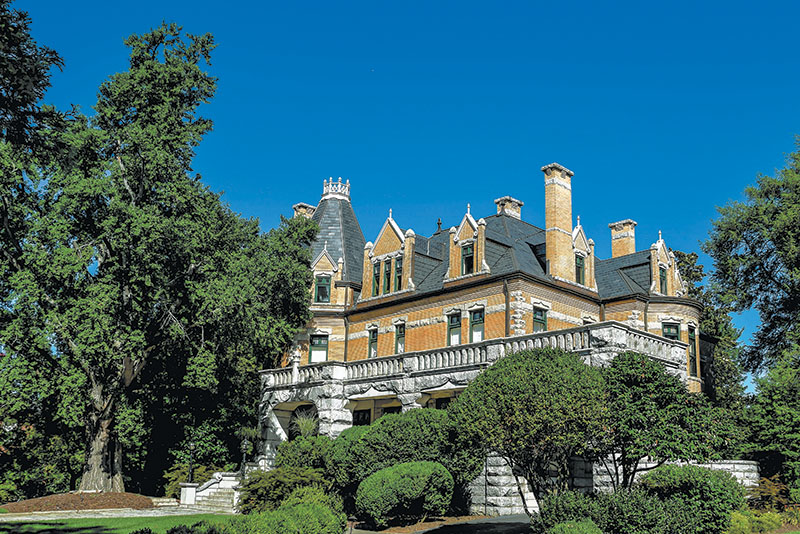 The grand chateau has often been referred to as Salisbury’s version of the Biltmore mansion in Asheville. It will serve as a major drawing card for the 42nd edition of OctoberTour, which in all offers 12 tour stops and continues as one of the oldest historic home tours in the South.

“This year’s tour promises to be one of the more interesting and informative,” a foundation news release said. “It features historic houses of varying sizes, complexity and architectural styles, including Chateauesque, Colonial Revival, Queen Anne, Arts and Crafts, Greek Revival, Italian Renaissance, and Romanesque.

“The tour sites tell the stories of those whose lives and labors have shaped the character and the historic fabric of this community. The architecture reflects the history, literally and figuratively.”

Whenever it has been on the tour in the past, which is rare, the 1902 Hambley-Wallace House at 508 S. Fulton St. has drawn big crowds.

It was built in 1902 for Egbert Barry Cornwall Hambley, a Cornish mining and civil engineer, who came to the Piedmont with entrepreneurial plans to develop gold mines and then turned to hydroelectric power.

Hambley needed a residence suitable for entertaining investors — hence the majestic scale and setting of the house.

Designed by the Charlotte architectural firm of Hook and Sawyer, the two-and-a-half story house and its grounds make extensive use of locally quarried granite.

The house’s notable architectural features include a steeply pitched roof pierced with spires, pinnacles, turrets, gables, towers and chimneys. The landscaping of the grounds was completed in 1904.

The property includes a carriage house, stables and servants’ quarters, also in the Chateauesque style.

Hambley died of typhoid fever in 1906. The house was sold by Hambley’s widow to John Norwood in 1917.

Leo C. Wallace and his wife, Ella Belle Cohen Wallace, acquired it in 1927. It continues to be owned by members of the Wallace family.

An extensive rehabilitation of the house and grounds was completed in 2012.

Here is a quick rundown of the other 2017 OctorberTour sites:

• The Minnie Lord Henderson House, 220 S. Fulton St. — When she built this house in 1922, Henderson said she wanted it to be “one of the most modern homes on the street.” Its low-hipped roof, wide eaves with exposed rafters and wrap-around porch epitomize the styling of the early 20th century Arts and Crafts movement.

• The Dr. F.B. Spencer House, 528 S. Fulton St. — This two-story brick house, built in 1924 for Spencer and his wife, Olive, was designed by one of North Carolina’s more prominent architects, Louis H. Asbury, and is a good example of the Italian Renaissance style. This house influenced the design of a number of houses in Salisbury, especially in Fulton Heights.

• The T.E. Coneley House, 428 W. Horah St. — This two-story stucco Queen Anne structure was built between 1904 and 1910 for Thomas E. Coneley, a foreman with Southern Railway, on a lot purchased from Jethro Rumple in 1904. Rumple wrote a noteworthy history of Rowan County in 1881. The new owner of this house has added a two-story circular screened porch.

• The J.C. Price House, 828 W. Monroe St. — The two-story Victorian house was built for Price in 1884. Price was the founder and first president of Livingstone College. Among the house’s notable features are a mantel and fireplace designed and built by Livingstone students as a gift to Price.

• The Lynch-Nicholson House, 624 W. Monroe St. — William H. Goler, Livingstone College’s second president, built this Queen Anne house in 1906 for librarian Mary Alice Lynch and her mother. Goler used students in the construction of this and other nearby houses. This house’s circular front porch with Romanesque arches and a center column is its most recognizable feature.

• The Shaver-Holmes House, 719 S. Fulton St. — This house is believed to have been built in 1852 as a Greek Revival cottage for Daniel Shaver. It originally stood at 407 Mocksville Ave. and was remodeled in the Colonial Revival style in the early 20th century. The house was moved to its present site on South Fulton Street in 1987 and restored by Mary Katherine Kluttz in 1989.

• Dr. J.W. Zimmerman House, 221 W. Thomas St. — Zimmerman, a Salisbury dentist, built this two-story brick veneer and wood-shingled house in 1916. It’s a Foursquare home like many on West Thomas Street with a hipped roof and central dormer, but it has many distinct features that combine to give the feel of an early Prairie style house.

• Neely School, 225 Neelytown Road, China Grove — The Neely School was built around 1908 by Julius Neely, a minister and farmer and his wife, Katie. It is believed to be the oldest one-room African-American schoolhouse surviving in Rowan County. It served more than 1,400 students in grades 1-7 before it closed in 1948.

• The Bell Tower, 225 W. Innes St. — One of Salisbury’s most iconic landmarks, the Bell Tower, dates back to 1892 and was once part of the old First Presbyterian Church, which did not survive the wrecking ball in 1972. The Blanche and Julian Robertson Family Foundation recently completed an extensive project to stabilize and repair the tower.

• The Hall House, 226 S. Jackson St. — The 1820 house museum is owned by Historic Salisbury Foundation and has anchored every OctoberTour since the first in 1976.

More information on each tour stop is available on the Historic Salisbury Foundation’s website.

The OctoberTour weekend will begin Oct. 12, a Thursday, with the annual Patrons’ Party — “A Night at Magnolia Mansion,” at the home of Bill and Shari Graham.

The OctoberTour luncheon Oct. 13 will feature a talk by HSF President Susan Sides, whose topic will be on the influence of E.B.C. Hambley on Salisbury and the surrounding area.

Plein air artists will be working throughout the West Square Historic District and will display their work at a reception from 5-7 p.m. Oct. 14 on the Hall House lawn.

The Grahams and Lee and Mona Lisa Wallace are presenting sponsors for OctoberTour 2017. Visit www.OctoberTour.com for more information.