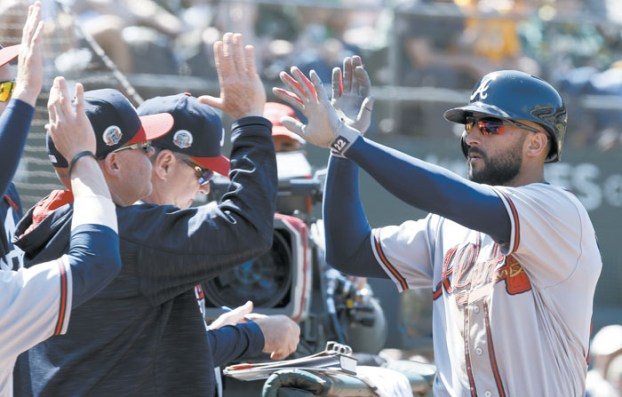 Atlanta Braves' Nick Markakis, right, is congratulated after scoring against the Oakland Athletics in the eighth inning of a baseball game Saturday, July 1, 2017, in Oakland, Calif. Markakis scored on a sacrifice fly by Braves' Matt Adams. (AP Photo/Ben Margot)

OAKLAND, Calif. (AP) — Dansby Swanson learned in college not to take fielding miscues to the plate, a lesson the Atlanta rookie shortstop has taken to heart during his first full season in the majors.

After committing his team-leading 14th error in the second inning against Oakland, Swanson came back with two big at-bats to keep the Braves rolling.

Swanson hit a tiebreaking double off closer Santiago Casilla in the ninth inning to drive in Danny Santana — one of two unearned runs scored by Atlanta — and the Braves held on to beat the Athletics 4-3 on Saturday.

“Whenever you don’t execute something that you should it can kind of stay with you but it’s something I take pride in, mental toughness and trying to move past things like that,” Swanson said. “I’m never one to throw thing or lose my cool but I have certain little things that I can do to help me get over things like that.”

Santana had two hits, two runs and three stolen bases while Matt Adams added a sacrifice fly in his return to the lineup as Atlanta won its second straight in this interleague series. The Braves have won 10 of 14 overall.

“It’s amazing how they never get done, just keep coming back, and it’s always somebody different,” Atlanta manager Brian Snitker said. “It’s not one guy carrying, it’s everybody doing their job.”

After Johan Camargo struck out swinging against Casilla (1-3) to open the ninth, Santana reached base on Oakland shortstop Franklin Barreto’s second error of the game. Santana stole second then scored when Swanson doubled down the left-field line,

Swanson also had an RBI double in the seventh.

“It just kind of shows what this team’s about,” Swanson said. “We just go about our business and try not to let the game dictate what we’re trying to do. We just keep going at it and keep going at it.”

Sam Freeman (1-0) retired two batters for the win. Jim Johnson pitched the ninth for his 18th save.

Ryon Healy singled twice and had an RBI for the A’s. Oakland has lost four straight.

Davis’ home run was his 22nd and spoiled a solid outing by R.A. Dickey. He allowed one run over six innings and was in position to win his third straight.

A’s rookie starter Paul Blackburn grew up about 45 minutes east of Oakland and had numerous friends and family in attendance. He allowed one unearned run over six mostly strong innings. The 23-year-old right-hander, who hit Brandon Phillips with the 10th pitch of the game, gave up three hits with four strikeouts.

“It honestly wasn’t as bad as I expected it to be,” Blackburn said. “Last night, just sitting there thinking about everything, I couldn’t really sleep, but I was excited and I didn’t have as much nerves as I thought I was going to have.”

ROUGH DAY IN THE FIELD

A’s shortstop Franklin Baretto made two errors, which led to two runs, including the game-winner. Baretto also crashed into left fielder Matt Joyce while chasing Santana’s fly ball in the seventh. Barreto initially caught the ball but it popped out of his glove when he collided with Joyce racing in, and Santana later came around to score.

“You have to fight through it as he will,” A’s manager Bob Melvin said. “He had a couple of tough plays, in between hops and balls that he’s coming in, got the better of him a little bit.”

Braves: Adams returned to the lineup for the first time since suffering a contusion after fouling a ball off his left foot.

Athletics: Jharel Cotton (blister) threw a bullpen session and could start Monday against the Chicago White Sox. 3B Matt Chapman (left knee cellulitis) was scheduled to DH for Single-A. IF/OF Chad Pinder (strained left hamstring) has yet to resume baseball activities or do any running. RHP Chris Bassitt, working his way back from Tommy John surgery last year, is set to pitch two innings Sunday for Class-A Stockton.

Oakland left-hander Sean Manaea (7-4) pitches the series finale and has won six of his previous seven starts. Atlanta will go with right-hander Julio Teheran (6-6), who beat the A’s in his only other career start against them in 2014.

By Mike London mike.london@salisburypost.com When Catawba College baseball players reunite this fall, Hunter Shepherd may be able to spin the best... read more