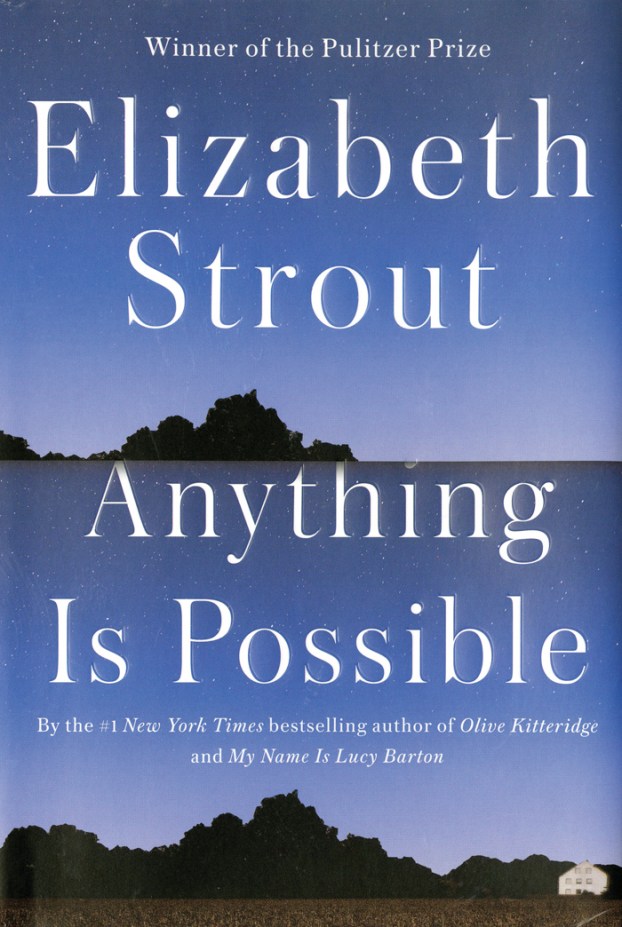 ‘Anything is possible’ in a messed-up world

“Anything is Possible” in Lucy Barton’s world, the one created by author Elizabeth Strout.

Healing is possible, connections are possible, but so is sadness and loss.

After the success of “My Name is Lucy Barton,” Strout realized she had enough material for a book of related short stories, in the style of “Olive Kitteridge.” Strout had to write about the people Lucy knew. She had to revisit the fraught landscape that produced Lucy, that gave Lucy her voice, her vision.

We meet Pete, Lucy’s brother and a recluse at the shabby family home. We meet her sister Vicky, loud and peeved, living a life of little pleasure or satisfaction.

But we also meet neighbor Tommy, who cares enough to stop and see Pete now and then. Tommy worries about Pete, who’s aimless and evasive, barely speaking.

One day, Pete blurts out an alarming story about his father, speaking volumes about the awful childhood Pete had. But it also speaks to Tommy’s nature, forgiving and kind as he gently consoles Pete.

We meet The Pretty Nicely Sisters, middle-aged women to whom life has been unkind. Patty, the school guidance counselor, was forever scarred by her mother’s tryst with a teacher. The students are vicious to her, especially after she loses her husband — a relationship others find bizarre.

Her sister, Linda, lives in a large house with an all-glass guest room. No doors. What happens there proves Linda’s husband is seriously disturbed, and suddenly wakes Linda up to the horror of her situation.

Patty has a thing for Charlie Macauley, who’s quite a bit older than she is, but he seems to need something she has.

Charlie, though, has demons galore, triggered by his PTSD.

Strout simply presents a glimpse of our secret lives, the ones even family may not know. And she does it deftly, with sincerity and an openness that is built of kindness and understanding.

She does it in such a way that we understand why Lucy is the way she is, and why she is a novelist, why she must write to make sense of all that she knows.

Families in her world are problematic, dysfunctional, making it up as they go along just to survive. Many marriages are broken by affairs, with daughters living with the consequences of their parents’ actions.

In another story, Angelina visits her mother, who left her father and married a younger Italian man. She lives now in a shabby apartment in Italy, with precarious health. Angelina, her favorite daughter, is visiting and assaulting her mother with guilt. Angelina has never grown up. Her husband separates from her, saying, “you’re in love with your mother.”

The two most touching stories are “Sister,” about Lucy’s visit to her home after 17 years away, and “Gift,” the final story in this collection.

In “Sister,” Lucy must come to terms with what her past really was. Nearly comfortable with her quiet brother in the old house, Lucy is disturbed when sister Vicky arrives and begins to talk about the awful things that happened to them.

Lucy’s dialogue with her mother in “My Name is Lucy Barton” is really about falling in love with her mother, perhaps for the first time. But Lucy has been able to keep the horrible memories tucked away, instead choosing the better parts.

When Vicky talks about their father’s sex obsession and bizarre behavior, how the family ate from dumpsters, how they were always dirty, Lucy  reacts, shaking violently, breathing hard. She has to leave not just the old house, but the town, get as far away as she can as fast as she can.

Lucy cannot face the truths of her childhood.

After Lucy is gone, Vicky tells Pete about their conversation:  “She kept crying and saying, I’m sorry, I’m sorry … and I said, Lucy, stop this right now. You got the hell out and you’ve made a life, stay out, it’s okay. She wouldn’t stop crying, Pete. …”

“The Gift” is Abel Blaine’s story. His gift is caring about others and forgiving. He takes his daughter and her children to see “A Christmas Carol,” just as they’ve always done. But tonight, it seems particularly banal, and his mind wanders to how his daughter’s life is busy, but not happy; to how the affection he and wife Elaine felt for each other is waning; to his memory of Lucy Barton at a book signing hugging him with tears in her eyes. Lucy is related to Abel. He remembers.

The show ends, and when granddaughter Sophia discovers she has lost her pink plastic pony, Snowball, Abel has to make it right, and now.

What happens next, with the less-than-talented actor who plays Scrooge, is remarkable. The actor has something to say, and Abel is the one who must listen, which brings him to reflect on his own life, not unlike Lucy’s.

“What puzzled Abel about life was how much one forgot but then lived with anyway — like phantom limbs, he supposed. Because he could not honestly say anymore what he’d felt when he’d found food in a dumpster. Gladness, perhaps, when he discovered large parts of a steak that could be scraped clean.”

Abel’s memories come flooding back to him as he experiences a familiar pain. The last words of the story, “Anything was possible for anyone,” become the book’s title.

Does it sound depressing? Maybe it is, but maybe it’s as revealing as Strout’s other books, that human nature is flawed and that’s what makes it bearable, that’s what gets us through life day after day.

There is so much more than pain here. The realtionship between mothers and daughters is central, inescapable, vital to survival. Forgiveness is there, a search for the perfect love. “Anything is Possible,” indeed.