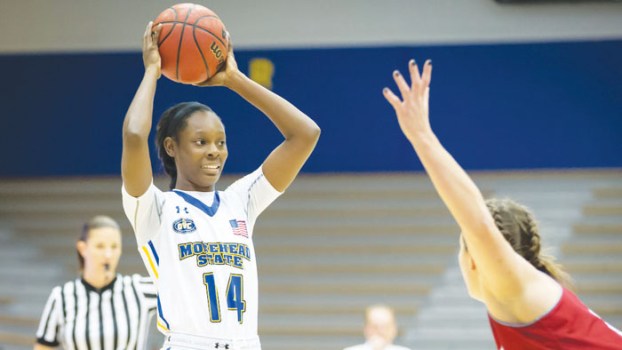 Morehead State sports information photo ... Former West Rowan great Shaw Steele (14) shown during one of her college games at Morehead State University. Steele has signed a professional basketball offer to play in the Canary Islands, part of a Spanish league. SALISBURY POST FILE PHOTO …
Shay Steele during her days at West Rowan High School, where she is the fourth all-time leading scorer. Steele was the Rowan County Player of the Year in basketball in 2013, as well as the Female Athlete of the Year.

SALISBURY — Shay Steele collects tips and questions while on the job at Christo’s Family Restaurant in Salisbury.

Most of the questions are of the “Wow, how tall are you?” and “Do you play basketball?” variety because at 6-foot-3, Steele is considerably taller and rangier than the average waitress. Thankfully, she hasn’t heard, “Hey, how’s the weather up there?” so far this summer.

Yes, Steele does play basketball and plays it well.  She’s not just 6-foot-3, she’s exceptionally athletic. And she’s not a center, she’s a forward. She runs the floor like a long-striding gazelle and flew on West Rowan’s conference champion 4×400 team when she was a high school senior. She could handle the 400 meters in a minute flat in high school. That unusual mobility, teamed with her extra-long wingspan, has always made her a defensive terror.

A recent college graduate, Steele, 22, holds a degree in exercise science from Kentucky’s Morehead State University, but the next phase of her life is going to involve professional basketball.  She signed a contract this week to play for Adareva Tenerife in Liga Femina 2, Spain’s second-highest women’s league.

“I love basketball and I really want to play it until my body tells me no more,” Steele said.

Adareva Tenerife is in the Canary Islands. While the seven islands, known for white-sand beaches, are part of Spain, they’re located in the Atlantic Ocean, almost 1,400 air miles from Barcelona.  The closest country is Morocco in northern Africa. Morroco is only 62 miles to the east of the islands.

“I really believe I’m going to enjoy living there and that I’ll enjoy my life beyond basketball,” Steele said. “I love the beach, love the warm weather.”

The 2013 Rowan County Basketball Player of the Year and Female Athlete of the Year, Steele ranks No. 4 in West Rowan history in career scoring with 1,541 points. She had a 38-point game against Statesville that people still talk about. She also had back-to-back 30-point outings, which hasn’t happened often in Rowan girls basketball.

Her career at Morehead State was outstanding. She was a three-year starter and averaged double figures all three years. As a senior she helped Morehead State make it to the WNIT for the first time. Morehead State went 21-10, its best season in many years.

Steele became the 23rd person in program history to reach the 1,000-point milestone and finished with more than 1,200. She topped 600 rebounds and her 170 blocked shots made her a frequent Ohio Valley Conference leader in that category. She ranks third in blocks in Morehead State history.

“What I was proudest of as far as my college career was the team winning more than it had won previously,” Steele said. “The program made progress, and as my game developed there, I started thinking that a pro career was realistic, that pro basketball was the next way to go.”

Steele’s dream landing spot would’ve been Australia, with Italy a close second. But Spain was in her top three.

“My favorite movie ever is ‘Love and Basketball,'” Steele said. “In that movie the main character (Monica Wright) goes to Barcelona to play pro basketball, so Spain was always kind of a dream.”

The first opportunity Steele’s agent put in front of her was to play in Finland. Steele has nothing against Finland, but her research indicated more fur coats, more snow (from November until May) and lower wind chills than she was looking for.

The next two offers were from a German team and from Adareva Tenerife.

“It was a good offer, besides the salary, they take care of housing and road meals and one meal a day when we’re at home,” Steele said. “They’ve told me I won’t need a car because everything is in walking distance, and I do like to walk and see the sights.”

The season for Adareva Tenerife starts in early October and continues into April. Basketball could last until April 17, depending on the playoffs.

Steele will leave around Sept. 1 to meet her new teammates. The team includes veterans of the European circuit, including some seasoned athletes in their 30s.

Steele spent some of her early years in Pittsburgh and arrived at West Rowan Middle School as a sixth-grader with limited hoops knowledge.

“I didn’t really realize I was so tall, compared to the other girls, until I came south,” Steele said with a laugh.

She was introduced to basketball in the seventh grade by West Middle coach Mitchell Anderson, who has served as sort of a father figure for her since that time.

The rest is history. Now Steele is a confident pro basketball player with a great life in front of her.

By Mike London mike.london@salisburypost.com MOCKSVILLE — It didn’t look like Rowan County pitcher Olen Stamper was going to make it through... read more