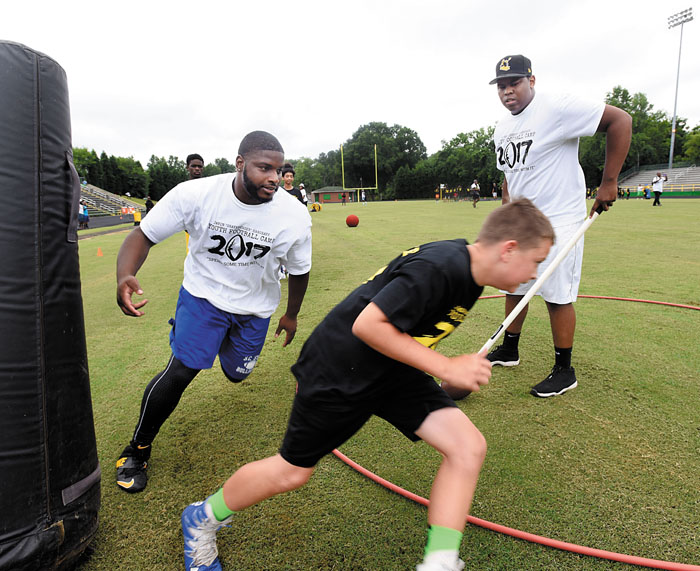 The camp was open to boys and girls, ages 6 to 14, and about 100 kids participated in the four-hour event. The campers enjoyed fun, food and were put through a series of drills.

Hargrave, a third-round draft pick out of South Carolina State in 2016, started 13 of 15 games for the Steelers on the defensive line last season. He was credited with two sacks. He also had a fumble recovery for a touchdown against the Cleveland Browns.

In addition, Hargrave had a sack of quarterback Tom Brady in the Steelers’ loss to New England in the AFC Championship game.

Hargrave assembled a solid staff to help him with his first annual camp.

Chris Smith, currently on the Cincinnati Bengals’ roster, after playing three seasons with Jacksonville, was there. Smith was a all-everything player for West Rowan and then became a starter at the University of Arkansas. Smith has 19 tackles and 4.5 sacks in just 19 NFL games.

Adams is also a current Steeler, having been drafted in the seventh round out of Western Michigan, in the most recent NFL Draft in April. Knox has played professionally in Sweden and Morris played briefly with the New York Jets after a solid career at the University of North Carolina. Rankin also played at UNC.

Other coaches were Marcello Fox, Scottie Simpson and Geair Hendrick.

Admission for the participants was just two items of canned goods, which will be donated to a local charity organization to be named at a later date.

The canned goods were collected by members of Man Up Monday, as part of their ongoing efforts to improve Rowan County.