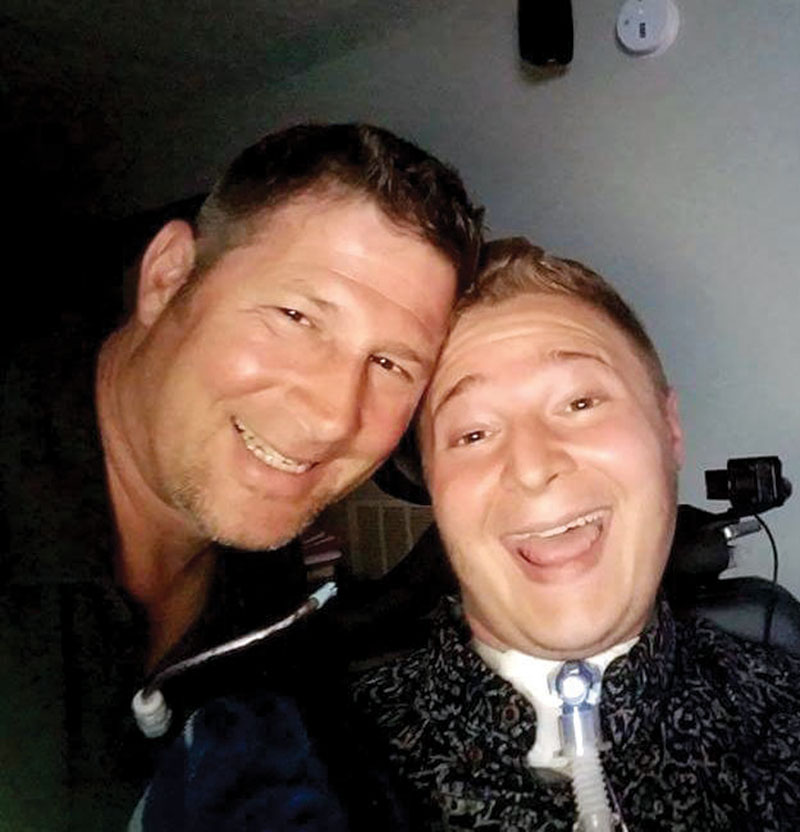 The ranks of Team Gavin swelled considerably Friday afternoon, as more than 250 friends and family members gathered for his celebration of life service at Destiny City Church on South Main Street.

Never without his infectious smile, even nearly five years after he broke his neck in a diving accident, the 20-year-old died June 25. The focus of yesterday’s service was quite intentionally not about Gavin’s death, but on the life he led and the people he touched.

“He was wonderful,” said Greg Bryant, a close friend of Gavin and his family. “He was full of energy, full of life.”

The first Halloween after his accident, Greg helped Gavin install blue LED lights on his wheelchair. He looked as if he were floating, Greg said.

Andy McKee was one of many in the crowd who sported white and green T-shirts with the words “Team Gavin” on them. “Love can heal” it said on the back.

Throughout the service, slide shows on two screens showed photographs of Gavin before his accident: standing on the beach, waving from a paddleboat, shaking maracas as a toddler, making silly faces with his dad. After his accident, he wore that same irrepressible smile.

“Today he is home,” said Dr. Rev. Don Vess, Destiny City’s pastor, during the opening prayer. “We give thanks for the hope we have in you.”

He continued, “Gavin always has a place in our heart. He has been set free. He is not in that body.”

The pastor read Gavin’s obituary, and quoted from John 14:1 “Do not let your hearts be troubled. You believe in God; believe also in me.”

To so many, he said, Gavin represented hope, something the young man’s father echoed.

Gavin showed courage on a daily basis, his father said. “It was a struggle. I’m not bringing my boy back from that glory. I’ve heard many times how strong I am. It comes from the Lord and it comes from Gavin. We hurt in the flesh. But that pain goes away, and the good times are what we remember.”

Even though Gavin was “stuck in a chair,” his dad said, he graduated from high school, he always wore a smile, and he never complained. “He lived two years in the dorm. I didn’t do that.”

Gavin had a big heart, he said. “He wanted people to be happy. He didn’t want anyone to worry about him. That is his legacy.”

Todd said he looked forward to the day that he would get to heaven and Gavin would wrap his arms around him, picking him up.

“Gavin, I love you,” Todd said. “I love all of you who loved him constantly.”

Todd then showed several video clips of Gavin in recent years — singing “Happy Birthday” to his papaw but getting tickled; riding in the boat with his family, the wind in his hair, singing along to “Uptown Funk”; and finally the last clip, with a more subdued message.

“I’ve had some rough days,” Gavin said, “but today’s a good day. I love everybody.”

Gavin will stay alive in the hearts, minds, souls and conversations of his family and friends, Todd said. “All good books must come to an end, and when they come to an end, it’s time to close the book and put it down. That’s Gavin’s story. I thank you all for being here today.”

Salisbury Police take foot patrol one step at a…