Salisbury Police take foot patrol one step at a time 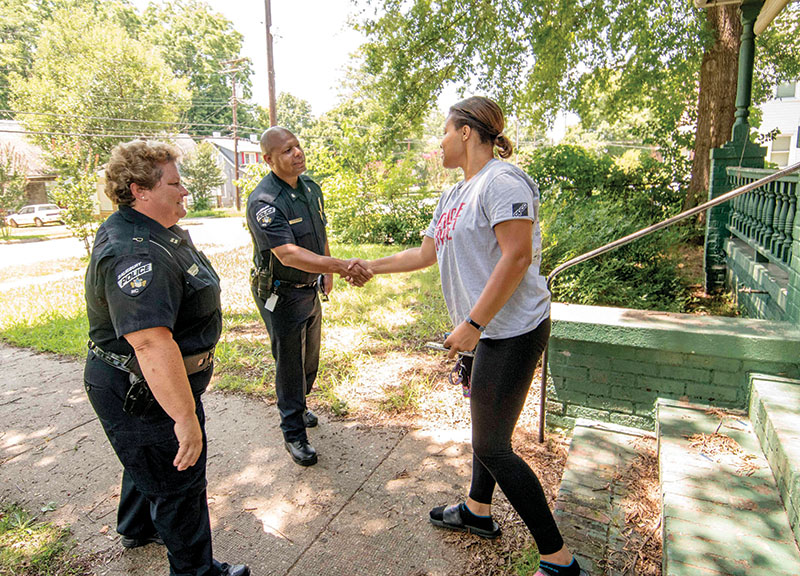 JON C. LAKEY / SALISBURY POST Capt. Shelia Lingle and Deputy Chief Shon Barnes stop to talk with Geneva Wright as she was sitting on the porch on a house on Park Avenue on Thursday. Several high-ranking officers went door-to-door in Salisbury neighborhoods to speak to residents and let them know to expect to see officers in their neighborhoods on foot patrol.

SALISBURY — Clara Boger routinely has her morning cup of coffee on her front porch and watches the occasional cars that may drive through her usually quiet neighborhood. After the December shooting death of A’yanna Allen, which occurred just a few houses away, the atmosphere in the Fairview Heights neighborhood just isn’t quite the same.

Boger and other residents in the neighborhood said the climate is different now just six months after the 7-year-old was killed and her murder left unsolved, but they hope a new foot patrol initiative by the Salisbury Police Department can fortify their small neighborhood.

“I’m glad they are here. It makes me feel better. I’m really tickled pink about that,” she said of knowing officers will be in her neighborhood regularly.

Boger acknowledged the change in the atmosphere of the neighborhood.

She said it was terrible that children are shooting other children and said, “the fact that they are doing this … makes me feel better.”

It’s a way to build a relationship or bridge between the community and police officers, Deputy Police Chief Shon Barnes has said.

Foot patrols will begin Saturday, but Barnes and members of the command staff — Capt. Melonie Thompson and Capt. Shelia Lingle as well as Officer Ann Cooper and Police Chief Jerry Stokes walked through the neighborhoods Thursday.

The five communities represent part of a pilot program that will enable the Police Department to collect data on the areas they patrol. There will be an evaluation after 90 days, and then the program will be expanded to include other neighborhoods across the city.

Officers will spend about 15 minutes walking through assigned neighborhoods in addition to their other duties.

Joy Irwin, who moved to the area from New Jersey, said she feels as though the foot patrols will make the neighborhood safer. She’s only lived in the neighborhood for a few months, but said she’s heard gunshots in the area. Irwin said it was nothing to see officers on foot patrol in New Jersey.

“It’s good. It makes you feel safer,” she said.

Barnes said one of the concerns residents had for officers was if it will be safe. He said officers are encouraged to go on foot patrols in pairs and every five minutes the officer will check in with a 911 communications dispatcher. The officers will essentially be out of service during the patrol, but if there is an emergency the officer will respond.

Police Capt. Shelia Lingle, who also went on the Thursday foot patrol, said she believes it will be a way for officers to interact with the community.

She thinks it will build the trust between the community and the police.

“It’s something positive. I’m not out here because something bad has happened,” Lingle said.

Faith Fourth of July festivities kick off with food…