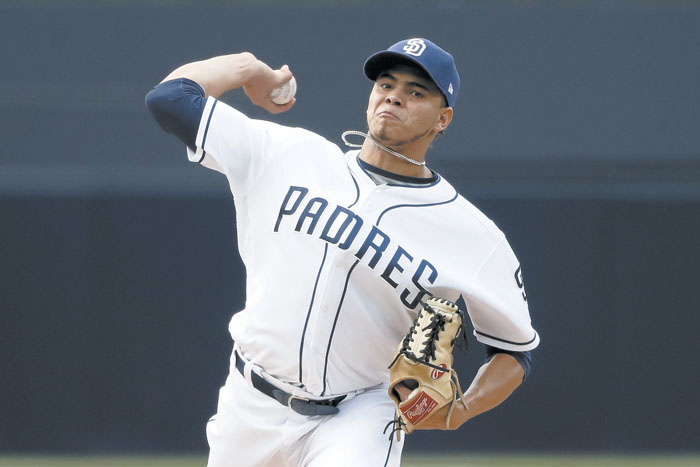 By JAY PARIS, Associated Press
SAN DIEGO (AP) — Padres rookie Dinelson Lamet allowed four hits over seven innings, and Wil Myers and Hunter Renfroe hit two-run homers as San Diego beat the Atlanta Braves 6-0 on Thursday night.
Lamet (3-2), in his seventh career start, was stellar as he spotted his mid-90s fastball and was able to get the Braves to chase his late-breaking slider. He struck out eight and walked one.
The win gave the Padres the three-game set, which snapped the surging Braves’ streak of taking four consecutive series. After winning eight of 10 games, the Braves lost two straight to the Padres.
Lamet was backed by Myers’ blast in the second and Renfroe’s shot in the fifth. It was the 16th homer for both Padres, which ties them for the team-high.
Jaime Garcia (2-6) lasted six innings, surrendering six runs and seven hits. He had six strikeouts with three walks.
Lamet, a native of the Dominican Republic who signed as a free agent in 2014, was much better. The right-hander retired the first 11 batters he faced until Nick Markakis singled sharply up the middle.
It was Lamet’s third straight quality start, although in the other two he didn’t factor into the decisions. Lamet won for the first time since beating the Cubs on May 25 as two relievers finished off the Braves.
Manuel Margot’s third hit in the seventh, an RBI single, provided the Padres’ final run.
Renfroe’s 439-foot homer in the fifth, with Myers aboard on a walk, pushed the Padres ahead 5-0. It was Renfroe’s third hit.
The Padres jumped ahead 3-0 on in the third, highlighted by Myers’ two-run homer. Myers’ long fly brought in Margot after he doubled. Margot’s extra-base hit scored Jose Pirela from first, after he reached on a single.
The Braves had two runners aboard in the fifth when Kurt Suzuki drew a one-out walk and advanced on Johan Camargo’s infield single. But Lamet got Garcia to groundout to silence the threat.
Atlanta had only two runners reach scoring position, and neither advanced past second base.
TRAINER’S ROOM
Braves: INF Freddie Freeman, who has been out since mid-May with a wrist injury, will play with Triple-A Gwinett this weekend in a rehab stint. … 1B Matt Adams was removed from Thursday’s game with a left foot contusion. X-rays were negative and he is day-to-day.
Padres: RHP Trevor Cahill (sore right shoulder) will have at least one more minor-league rehab start for Triple-A El Paso.
UP NEXT
Dodgers: LHP Alex Wood (8-0, 1.86 ERA) is the first Dodger since Fernando Valenzuela in 1981 to start a season 8-0. And not since Orel Hersisher in 1985 have the Dodgers had a pitcher remain unbeaten after 11 starts into a season.
Padres: LHP Clayton Richard (5-7, 4.42 ERA) has split his two decisions against the Dodgers this season. He’s looking to rebound after allowing five runs in 5 1/3 innings to the Tigers on Sunday.
___
More AP baseball: https://apnews.com/tag/MLBbaseball