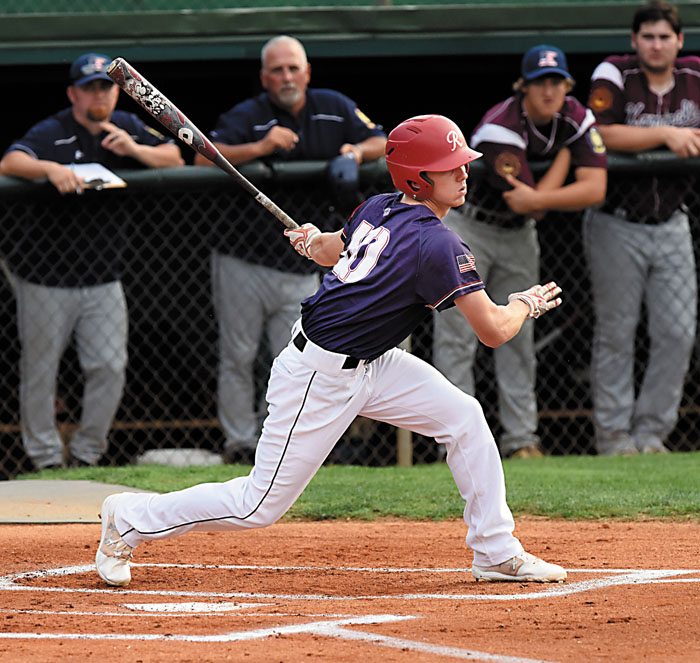 Wayne Hinshaw/for the Salisbury Post ... Rowan’s John Owen, shown hitting during an earlier game this season. He not only pitched well Friday night at Concord, but also banged out four hits at the plate. Rowan won, 11-6.

MOUNT PLEASANT — Rowan County’s American Legion baseball team usually only has to throw one punch, knocking opponents silly with an early scoring explosion, and then cruising to victory.

Friday’s game, the regular-season finale at Concord, was different.

Rowan jumped on top, 9-1, and appeared headed for another routine romp, but then Concord suddenly made a game of it with a five-run fourth inning. Rowan had to call on John Owen for three devastating innings on the mound to stop Concord’s momentum and secure an 11-6 victory at Mount Pleasant High.

Owen struck out seven batters, as he put up zeroes on the scoreboard in the sixth, seventh and eighth. That’s where the game was decided. Rowan stabilized, regained its mojo and held on. Last year, Rowan blew a 6-0 lead at Concord, but Owen didn’t allow that to happen this time.

“Definitely, we felt the momentum turning their way when they scored those five runs and then we had two straight innings (the fifth and sixth) where we didn’t get anything,” Owen said. “I only threw two curveballs all night, but I was locating the fastball and I was getting swings and misses for those strikeouts.”

While its string of mercy-rule wins was interrupted, Rowan (24-1) did complete a perfect season (10-0) in the Southern Division of Area III.  Rowan has a first-round bye in the playoffs, so it won’t return to action at Newman Park until July 4 when a best-of-five second round begins. Rowan will take on the Kannapolis-Winston-Salem winner.

Playoff tiebreakers and pairings were finalized very late on Friday. Concord (11-6, 5-5) got the No. 2 seed for the Southern Division and will be in best-of-three, first-round action tonight against Davidson County at home.

Rowan banged out 19 hits, with everyone in the starting lineup getting at least one. Owen had four, while Chandler Blackwelder, Chandler Lippard and Brycen Holshouser rapped three apiece.

Blackwelder sent a triple screaming off the fence to start the game, his sixth three-bagger of the season. The program record for triples in a season (10) was set by Kelly Gordy and has stood since 1979. Rowan has a pair of triple machines this year in Blackwelder and Lee Poteat, and if Rowan can play deep enough into the summer, they may challenge that 38-year-old mark.

Lippard’s RBI single quickly made it 1-0. After Lippard advanced on a wild pitch and passed ball, Owen’s first hit made it 2-0. A run scored on Brett Graham’s fielder’s choice bouncer, and Tanner File’s infield chopper made it 4-0 before Concord starter Joe Muhonen, a Central Cabarrus product, could escape the first inning.

It was 7-1 by the time Owen led off the fourth inning with a triple. He doesn’t hit many of those. He’s an above-average runner, but he’s not a sprinter like Blackwelder or Poteat.

“Well, at first, I thought it was going to be a home run, but it turned out to be a wall-scraper,” Owen explained. “Then I was running hard between first and second and my helmet flew off. I saw Coach (Seth) Graham holding his hands up, trying to stop me at second, but by that time I was already heading for third.”

Trevor Atwood drove in Owen. Another run crossed in the inning, and Rowan was up 9-1.

It looked over, looked like another certain 10-run-ruler, but that’s when Concord fooled everyone. Concord batted around in the bottom of the fourth.

Concord had stranded two runners in each of the first three innings against Rowan starter Hayden Setzer, but it finally delivered hits with men on base in the fourth, mostly against reliever Henderson Lentz. Hayden Radford produced a run-scoring single. Grayson Huneycutt knocked a run in with a double. Brett Laws whacked a two-run single.

“They got some hits that were pretty lucky, but they definitely did a good job of fighting back in the game,” Owen said.

Prior to the game, Rowan pitching coach Russ Weiker had informed Owen he would probably pitch at some point. That was music to Owen’s ears. That point turned out to be the bottom of the sixth.

“I’m always asking if I can pitch,” Owen said. ” I was in line to pitch if needed tonight, and it  just worked out.”

Holshouser’s third hit triggered a two-run eighth for Rowan. Those were two big runs, finally put momentum back on Rowan’s side.

Owen whacked his fourth hit in the ninth. It was a double and capped a 4-for-5 day for him. He’s showing what he can do at the plate this summer. He was exclusively a pitcher last year. He went 1-for-2 for Rowan in the long summer of 2016.

“I was fortunate to get in good hitting counts all night,” Owen said. “It was always 2-and-0 and 2-and-1, and they gave me fastballs to hit. And mostly they were high fastballs.”

Griffin Myers pitched the ninth for Rowan. After Concord, thrilled to see someone besides Owen on the mound,  put the first two men on base, Weiker visited the mound.

At that point, Myers settled down. He retired the next three batters, the last one on a liner, and Rowan had won again.