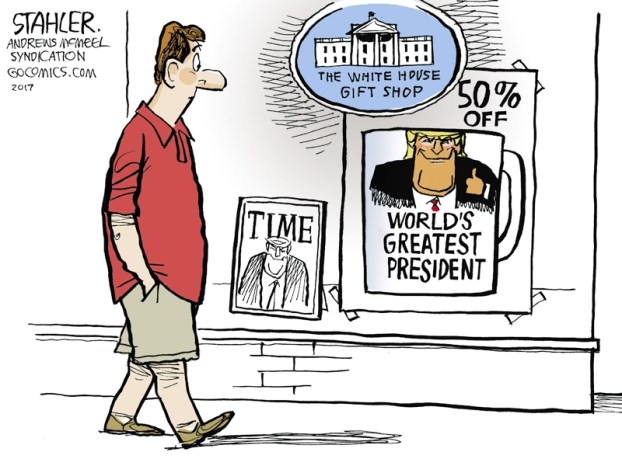 Seriously? Recusal because she (Justice Ruth Bader Ginsberg) doesn’t like Trump? Can’t be impartial? Neither one of you congressman have any like for being humane and providing health care and food for the poor people of your districts.

You should recuse yourself from being a congressman. Can’t call you a representative cause you don’t represent your constituents.

She called Trump a “faker?” How can that be true? How about I post a quick 100 examples?

Budd and Hudson have joined a group of 50 con artists. I suggest they sue Ginsburg and take her to court and make her prove the veracity of her statements.

Todd Poole: “Ted, we’re way behind in fundraising for 2018. We need to do something desperate”

Todd: “I dunno, dump on Bernie Sanders and Justice Ginsberg a bit. That’ll get the rubes riled up and writing checks”

… Bruce La Rue: Not the same kind of different

Some left wingers are suspicious of Trump and the Republican Party, and with good reason. Many Republican Party members, including Trump, encourage discrimination against LGBTQs by legislation and by speaking publicly about them. Trump has done little to discourage hatred towards these people. …

I am sorry that you have suffered because of prejudice against LGBTQs. It is wrong to be cruel and hateful to others. It is wrong to malign them for being different in the name of Jesus Christ. From “The God Box”: “The Church should just stay out of people’s pants.”

LaRue isn’t gay, and isn’t a member of Gays for Trump. He is, in fact, a far-right, virulently anti-gay conservative. This, of course, qualifies him to make judgments about the internal politics of gay organizations which he opposes.

The Pillowtex closing is exactly why the Community Care Clinic exists. No one really wants to be unemployed and uninsured, but history does have a way of repeating itself time and time again. One would think we could learn from these mistakes.

Thank goodness the good people in Salisbury/Rowan County realize how rules and regulations leave out people like Vera. Thanks to everyone who donates money, time or supplies to support this important clinic that more than fills in the gap for all Rowan County residents.

Great article, Barbara. I wish my Daddy and Mama (Harley and Virginia Kinley) were still around. We didn’t know much about how to deal with their dementia but we did the best we could. And we appreciated you and your staff at the day care for Daddy.

I’m a firm believer in live and let live. I have always voted Democrat. But the debacle those folk put on downtown Saturday is why people despise them. Why don’t they live their lives in a fashion they choose, but don’t rub your lifestyles in people’s faces? If you just went your way minding your own affairs, people would leave you alone.

Jerry, I don’t see how they’re rubbing their lifestyle in your face. If you don’t like it, you do not have to attend the event.

I think that you miss the point of Pride and should consider coming to the next event to see what it’s all about. Pride is not about putting your head down and avoiding people. LGBTQ people have had to hide their “lifestyle” for years to avoid harm or harassment. This is about opening up, acceptance and community. We would love to see you at the next Salisbury Pride!

I was there as a heterosexual man, and the only lifestyle shoved in my face was from people holding large signs and crosses while yelling at children.

What makes America such a great country, as opposed to many others, is our freedom. People have a right to say what they want, just as you do, but you have to live with and accept the consequences of those words.

So good to see the “God Hates You Because …” folks came out again. Just wouldn’t be the same.

Why are the reporter and Post putting family friendly in quotation marks?

It’s a welcoming event, not an intruding one. One for understanding and one where as a participant I personally witnessed young happy children led by smiling parents looking out to a scary perimeter of young children led by angry shouting parents — and wondering what differences the children truly saw.

“Family friendly”? I fail to see how it was family-friendly when there were so many half-dressed folks in attendance. …

I was disappointed in this year’s event. There were many folks there who were not reflective of the gay community at large. I prefer to conduct myself in a manner which enhances the gay community, not detracts from it.

The sad and repulsive part were the protesters that had their children screaming obscenities. It wasn’t the Pride attendees that people needed to be worried about.

This year’s Pride Festival was a huge success for many reasons. What I noticed most was the racial diversity as well as generational diversity. As I felt tears come to my eyes watching hundreds of youth dancing in the street and just having fun with big smiles, I felt renewed with hope for everyone.

I was born and raised in Salisbury. When I came across this article I was surprised, to say the least. I think I always knew there were gay people all around but still felt like I couldn’t express myself until I moved out of town. I am so happy to see that Salisbury is now a “grown up city” that welcomes people no matter their story is.

I now live in the Dallas-Fort Worth area where members of the LGBTQ community are safe and secure in the knowledge that we don’t have to hide our lives either at work or out in the open.

I am disappointed in Senator Burr’s unwillingness to consider the damage this bill will inflict on 22 million Americans.

It is time to be heard. Call Sens. Richard Burr and Thom Tillis and voice your opposition on this heartless, cruel bill that will cost many people insurance and many more people their lives.

Great work, Richard, and thank you for partnering with City Parks and Rec and JLT Fieldhouse. Sounds like a great team.

Congratulations! Thank you to the Robertson Foundation as well.

… Landis man killed when mo-ped crashes, pins him under car

Why is a residential road so dangerous? Second death of a person killed by a driver who “didn’t see them” on this road.

The police have ignored me asking them to monitor and ticket drivers. The mayor hasn’t done a thing to change the speed limit or install stop signs, despite saying he would when he stood outside the library asking for my vote.

Traveling a residential road in a small town shouldn’t so frequently end this way.

Praying for both families.

… An empty seat at the round table: Friends remember Bobby Hooks

A great article about a great guy. Thank you for featuring his kindness and fun spirit!

Such a good article for such a good man. My thoughts and prayers are for Donna and the girls.

Great article. He told me how special his mornings were. I know he will be greatly missed by all.

“Brock said he was not familiar with the $135,000 for Cooleemee, which sits at the border between Rowan and Davie counties.”

Let that one just sink in for a little while, folks, and think about who Brock is, and who he is supposed to represent.

What about those who are fleeing persecution and death? Should we deny them sanctuary? Should we do away with H1B visas that allow workers to do minimum wage jobs that Americans will not accept? What threat does a taxpaying temporary worker earning $8 per hour pose?

They need to obtain freedom the way America found freedom. Those “Syrian refugees,” by the way, tend to be males of military age, who don’t behave. Ask the women of Cologne.

According to the FBI, INS and the U.S. State Department, Syrian refugees who make it to America are primarily elderly men and women with children.

This sounds like a good plan and a good start to reducing the coyote population. There is nearly a media report a day about coyote attacks on pets and children.

Despite the whining of PETA and HSUS, coyotes are carnivorus predators and have reached dangerous population levels. Two children have recently been serious attacked. An 8-year-old was critically injured May 22 in Stillwater Oklahoma, and a young girl in Alberta was knocked down and injured this week.

… Day after CPR training, man brings swimmer back to life

Mary, you are a gem in the crown of Rowan County. Thanks for all you do for our community!

Congratulations, Mary; proud of your accomplishments!

If they plan to keep activities at least 100 feet from the hives, are the bees going to be notified not to fly any closer? Will there be a “no fly zone” set up, and who enforces it?

Prepare to be stung!

Dart to the difficulty of dealing with bureaucracy on something as simple as sidewalks. The Granite Quarry Board of Aldermen... read more