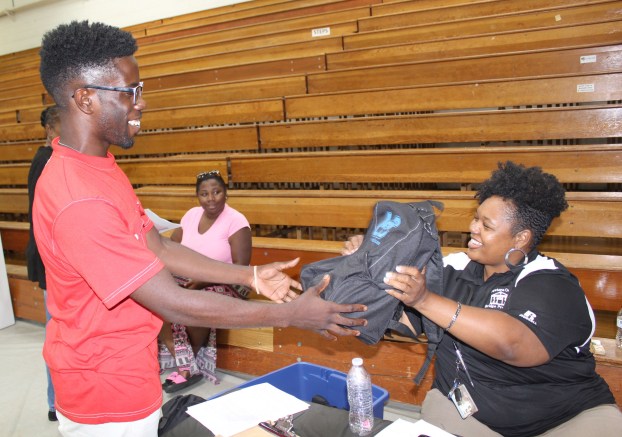 Dr. Jimmy Jenkins Sr., Livingstone College president, talks candidly with students about his expectations of them during the summer Bridge Program at orientation on Saturday morning inside Trent Gym. Submitted photo

SALISBURY — For a contingent of students at Livingstone College, the next six weeks will not be a walk in the park but more like basic training to prepare them for college life.

“This is boot camp. I hope you survive,” Livingstone President Jimmy Jenkins told parents and students gathered in Trent Gym on Saturday morning.

“We believe in you. You may not have done as well as you could have in high school or you might not have been able to get into another school, but you can get life out of a stone – at Livingstone,” he said.

The students are part of one of Livingstone’s hallmark initiatives called the Bridge Program, which was started by Jenkins when he became president in 2006.

It gives students with academic deficiencies a second chance at getting into college. If the students commit to and complete the six-week program, which operates under a boot-camp model, they will be admitted into the college in the fall as provisional students and receive a stipend toward tuition.

The Bridge Program is like getting your record wiped clean, Jenkins told the students. “It’s like starting over­ – being reborn.”

Students follow a rigorous daily schedule including a 6 a.m. workout and morning devotion, followed by classes in math, reading and writing from 8 a.m. to 3 p.m.; academic enrichment sessions from 3 to 5 p.m.; and a range of fun evening and weekend activities.

“The No. 1 destroyer of college education is freedom,” said Sylvester Kyles, Bridge Program director. “When students have a choice to get up for an 8 o’clock class or not, they are not getting up.”

But when students come to the Bridge Program and have to get up at 6 a.m. and then later get an 8 o’clock class after being enrolled, they feel as though they have actually slept in, he said. “It’s psychological. What we’re trying to change is attitude and behavior.”

There is a heavy emphasis on attitude and behavior, as well as etiquette. Real Talk sessions held on weekends include conversations based on specific episodes of the former TV show “A Different World,” and students hear from motivational speakers throughout the summer.

There is a talent showcase at the end of the program, at which a Mr. and Mrs. Bridge are crowned.

Jenkins reinforced the rules of the program, including the dress code, language and attendance.

Parents signed contracts requiring them not to visit their children during the duration of the program – holidays and birthdays included.

Faleese Moore Jenkins, the first lady of Livingstone College, encouraged parents to be strong. “All the things you taught your child will show up. Trust us; we do a good job at what we do.”

“Education is the surest vehicle for upward mobility in the world. It’s better than winning the lottery,” President Jenkins told the audience.

“I know you have the capability. All you need is a second chance and at Livingstone, we give you that chance. This is the first day of the rest of your life. If you do well, they won’t talk about who you were in high school but who you were at Livingstone,” he said, giving examples of Bridge students who have done exceptionally well after studying at Livingstone.

For more information about the Bridge Program, call Sylvester Kyles at 704-216-6874.

SALISBURY – For Jean Helms, the owner of Bella’s Barkery, her store’s opening is a dream fulfilled. “I’ve wanted... read more