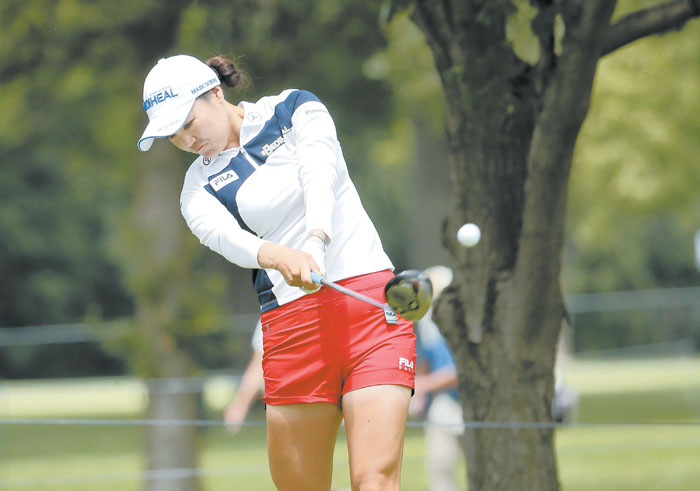 OLYMPIA FIELDS, Ill. (AP) — So Yeon Ryu wants to halt what has resembled a game of musical chairs on the LPGA Tour this season.

The newly minted world No. 1 will be going for her third win when the KPMG Women’s PGA Championship — the second major of the season — tees off Thursday on her 27th birthday. She comes in off a dominating win last week in the Walmart NW Arkansas Championship , which made her the first repeat winner in 16 events this season.

Ryu won the ANA Inspiration in April for her second major title after front-running Lexi Thompson was tripped up by a four-shot penalty. Ryu beat Thompson on the first hole of sudden death.

Including the KPMG, the women’s tour will play three majors in weeks, giving Ryu the chance to prove her climb to the top is just the beginning of a long reign.

When a reporter asked this week whether her ambitions included sweeping the five majors this year, she quickly, but gently corrected him.

“But if I can do it,” she added a moment later, brightening, “that’s going to be fantastic.”

It would put a shine on what’s been a sparkling week already. Former Secretary of State Condoleezza Rice and Olympic skiing champion Lindsey Vonn were among a number of prominent women involved in mentoring programs spurred by the tournament spotted on-course this week. A number of players visited Wrigley Field for a game and were spotted sampling nearby Chicago’s high-profile culinary scene.

“I was nervous,” Mickelson said afterward, “because I know how good they are.”

“They play sparingly,” he said. “They’re not passionate about it, but they’re very confident.”

Ryu’s confidence is on the rise after an up-and-down career. She won the 2011 U.S. Women’s Open, but only twice more on the LPGA Tour until this season. She has strengthened nearly every part of her game since she began working with Cameron McCormick, who also coaches Jordan Spieth.

So far, Ryu hasn’t had the chance to pick Spieth’s brain — “We always had our lesson times, but we never really practiced together,” she said. But McCormick’s experience steering Speith through some pressure-packed situations has already paid dividends.

“Cameron already knows what we are feeling. … He never gets upset with, OK, this is the right position, this is the right angle … (he) never really obsesses about the technical thing,” she said. “He has a really good balance between technique and feel.”

That calm is likely to be tested by a handful of rivals, including Thompson, a resurgent Michelle Wie and all three women Mickelson outlasted Monday.

Henderson played Olympia’s South Course in the U.S. Junior and ruled out “super-low scoring” if the strong wind and rain predicted for the week materialize. That could also strengthen a bid by long-hitting Ariya Jutanugarn, who slipped to No. 2 after Ryu’s win.

Ko, who held the No. 1 spot for 85 weeks, has been in a relative career lull since starting this season with a new coach, caddie and clubs. Lewis, meanwhile, was instrumental in the KPMG becoming a major event and would like nothing better than making this her third major.

LPGA Tour Commissioner Mike Whan is officially neutral, but Lewis’ efforts in elevating the KPMG have helped him achieve one of his own most important career goals.

“The late great Louise Suggs said to me in 2009 in a hotel lobby in Houston, ‘You have only one job, kid, and that’s leave this game better than you found it,’” Whan said Tuesday. “If I do nothing else in the rest of my time as commissioner or erase everything else I’ve done until now, this one event would have been able to keep my promise to one of the founders of the LPGA.”

NASCAR returns to Daytona for the holiday weekend