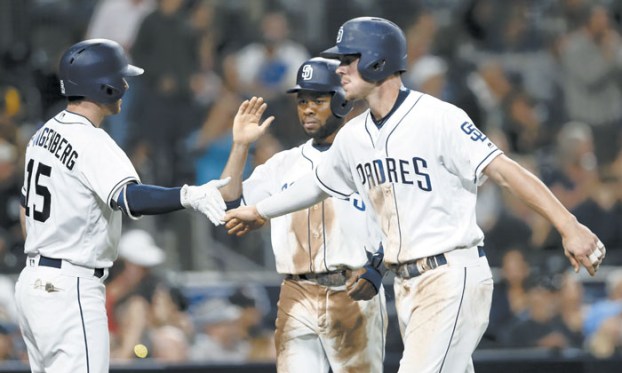 Associated Press
SAN DIEGO (AP) — Luis Perdomo pitched five scoreless innings and Hunter Renfroe and Cory Spangenberg contributed two RBIs apiece as the San Diego Padres beat the Atlanta Braves 7-4 on Wednesday night.
San Diego’s Carlos Asuaje and Erick Aybar had three hits each.
Perdomo (3-4), who was winless after his first 10 starts, won for the third time in his last four outings. The right-hander went 5 1/3 innings and was charged with four runs and seven hits. He struck out four and walked two.
The Braves, who had won five straight over the Padres, chased Perdomo in the sixth when they scored four times. Earlier Perdomo was aided by two double-play balls as Atlanta lost for just the third time in 11 games.
Brandon Maurer worked a perfect ninth for his 15th save.
Veteran Bartolo Colon (2-8) turned in another disappointing start, pitching for the first time since going on the disabled list with a strained left oblique on June 6. Colon, 44, surrendered six runs, eight hits and three walks over four innings. The four-time All-Star struck out two in losing for the sixth time in his last eight starts as he failed to reach the fifth inning for the third consecutive outing.

Curry can play golf, too