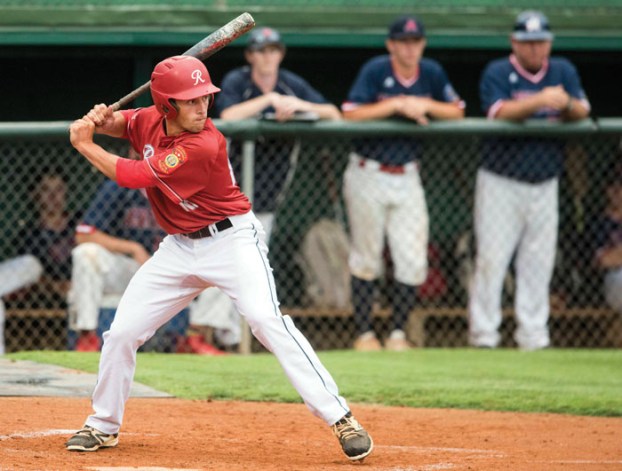 MOCKSVILLE — It didn’t look like Rowan County pitcher Olen Stamper was going to make it through the first inning.

“He couldn’t throw his breaking ball for strikes. he wasn’t keeping the ball down, and Mocksville was hitting fastballs,” Rowan coach Jim Gantt said.

Stamper (3-0) figured it out, made adjustments. He wound up pitching six strong innings on Thursday and took advantage of overwhelming run support to demolish Mocksville, 17-2.

“Blackwelder is  a good hitter and everything that he hits is finding a hole right now,” Gantt said. “He’s just lining up everything, even his outs are hit hard. He’s going to cool off eventually because it’s baseball and no one can stay hot forever, but he’s one of those guys who can handle it mentally. If he does go into a slump, it should be a short one.”

“It’s always nice to hit a few over the fence,” Gantt said. “Maybe they were Rich Park homers, but both teams were swinging for the same fence,”

Lippard’s second homer of the summer (both on the road) came on a 2-and-2 pitch right after Blackwelder smashed his triple. Lippard, who usually bats sixth, was hitting in an unfamiliar position in the lineup, No. 2, with Henderson Lentz out.

“I believe it was a changeup, and he left it up for me,” Lippard said. “It felt great to hit it out.”

There wasn’t much suspense about the outcome after the early blasts by Setzer and Lippard. Stamper and Rowan’s defense, which turned four double plays to erase potential Mocksville threats, made sure of that.

“Stamper started getting the ball down in the second inning, so he got ground balls,” Gantt said. “He’s a tall guy and his overhand curveball can be really effective when he can get it down. Our defense did the job behind him. It’s not like they were having to make a lot of web gems, they were just making routine plays that should’ve been made. We had those four double plays (three to help Stamper, the fourth to end the game) and none of the plays at first were close.”

Lee Poteat had two hits and two sac flies, and he’s hitting the ball hard just as consistently as he did last season when he was Area III Player of the Year.

“We’re just hitting the ball well as a team,”Lippard said. “Once Olen got settled in tonight, it was another good game for us.”

Mocksville coach Charles Kurfees missed the action. He was ejected from a heated, 8-7 loss to Kannapolis on Wednesday.

Rowan scored double-digit runs for the 15th time this summer and prevailed via the 10-run rule for the eighth time. Rowan has scored 16 runs per game in its five outings since losing, 6-1, to defending national champion Texarkana, Arkansas, in a tournament in Florence, S.C.

Rowan will try to complete a perfect regular season in the division tonight when it visits Concord Post 51 at Mount Pleasant High at 7 p.m. Rowan went 9-1 in the division last year. The loss was at Concord.

Mocksville, which used four pitchers, fell to 9-12 overall and finished 4-6 in the Southern Division of Area III.

All 13 teams in Area III will be in the playoffs. The best-of-three first round begins on Saturday. Rowan has a first-round bye. Rowan’s opening playoff game will be at Newman Park on July 4 when the best-of-five second round begins.

Curry can play golf, too