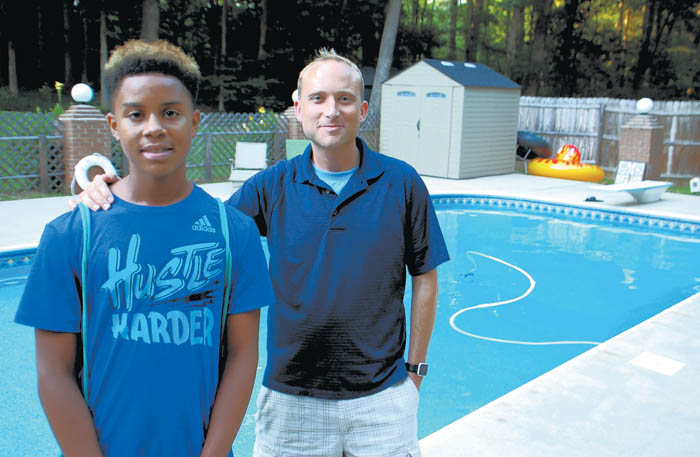 SALISBURY— A co-worker talked Brad Jackson into it, and she penciled their names onto the sign-up sheet attached to the refrigerator in the office break room.

Part of the administrative staff at Lutheran Services Carolinas, they had signed up for a refresher course in cardiopulmonary resuscitation.

Jill Nothstine and Sandra Cross led the training, and the turnout that Friday morning was light, only about a half dozen people, so each student had his own mannequin on which to practice.

The instruction took just over an hour. It was voluntary, not mandatory, but Jackson thought it couldn’t hurt to hear it and practice the chest presses and mouth-to-mouth breathing again.

“How often do you take a CPR class and the next day have to use it?” Brad asked this week, looking back.

Sitting next to him poolside in Jackson’s backyard was 13-year-old C.J. Dickerson. Only 10 days earlier, Dickerson had been lifeless and unresponsive in 8 feet of water at the bottom of Jackson’s pool.

But here he was happy and joking, all because Jackson had taken that CPR training the day before and used it to save his life.

“God put Brad in the place he needed to be at the time,” said C.J.’s mom, Nicole Dickerson. “I cannot begin to say how much thanks you have.”

Jackson has become an honorary family member of the Dickerson household. And the same could be said of C.J. with Brad’s family.

Nothstine and Cross have been teaching CPR for several years at nursing facilities operated by Lutheran Services Carolinas. But a couple of years ago, they decided everyone at Lutheran Services should be exposed to the training.

“We’ve always said, ‘You just never know when you’ll need it,’” Nothstine said. “… We really feel passionate that everyone physically capable should know how to do it.”

The Monday morning after his eventful weekend, Jackson stood up toward the end of the weekly staff meeting and said he had a story to share. He then told co-workers about his pool, C.J., the CPR training he had received only days earlier — and the great outcome.

The room gave him an ovation. Nothstine and Cross might have been the proudest.

“I can’t find the words to describe it,” Nothstine said. “… Tears came to my eyes. I thought, ‘Oh, my goodness.’ I was so pleased he was there and he did so well. He really stepped up.”

Jackson, 33, doesn’t paint himself as a hero, only a guy who was in the right place at the right time. “Someone said that this was a perfect example of divine intervention,” he said, “and I could not agree more.”

The best explanation doctors and relatives have for C.J. Dickerson’s trouble in the water that day is his asthma. C.J., who learned to swim in the second grade, said he remembers swallowing water and not being able to make it back to the surface.

That particular Saturday started with Isaac Castro, the son of Brad’s cousin Amanda Medina, asking Brad whether he could bring his friend C.J. to Brad’s in-ground pool. Brad and his mother, Judy Hatley, live off Bonanza Drive in the Bennett Heights subdivision.

Brad cleared it with Amanda, and he knew he would be around the young swimmers, working on a troublesome poolside spigot. Amanda also came with Isaac and C.J. and was in the water with them.

It was Amanda who spotted C.J. at the bottom of the pool, grabbed him by the shorts and tried to pull him to the surface.

Somehow the two pulling together managed to get C.J. to the side of the pool, out of the water and on the concrete apron.

“He was obviously lifeless,” Brad said. C.J. was still wearing his goggles, which had a mixture of water and blood inside. His lips were blue, and he was not responsive.

Amanda grabbed a telephone and called 911. Brad turned C.J. onto his back and started chest compressions he had learned the day before.

“It was scary,” Jackson said. “I would describe the situation as panic.”

Judy, Brad’s mom, heard the commotion. “I normally can’t run,’” she said, recounting how she ran that day. “I got down here, and I thought, ‘My God, I got to get over there and pray for this child.”

Jackson counted out 30 chest compressions, then a series of breaths. He went back to the next set of compressions, wondering whether he was pressing hard enough.

After more breaths, Jackson went to a third set of compressions. After two more breaths, C.J. was gurgling and water was coming out of his nose, and soon his mouth. His eyes opened.

“It was like a deer in headlights,” Jackson says, describing how he put C.J. on his side. “He was there but scared.”

Jackson realized then he didn’t even know C.J.’s name. When he yelled to Amanda and asked for his name, he at first heard “D.J.”

C.J. had a scrape on his chin, cut when he was pulled from the water. Jackson didn’t know it at the time, but his own knees were all bloody from the concrete. Judy retrieved a towel and put it under the boy’s head.

C.J. said he felt dizzy, as though he was “going through levels.”

When emergency responders arrived, they said they would need the parents’ consent to treat C.J. Amanda grabbed C.J.’s cellphone and located a number for his mother, Nicole.

Amanda asked Jackson to break the news. She was too unnerved.

“C.J.’s OK,” Jackson told her, “but we had an incident while he was swimming.”

Jackson explained how he had done CPR and that C.J. was back, but she needed to give the first responders permission to treat him further.

Nicole said she and the rest of her family were grilling out that afternoon, and she had told a friend only a minute earlier that C.J. was swimming with a friend. Then Jordan handed her the phone.

The Dickersons went straight to the hospital. X-rays showed C.J. still had some water in his lungs, and because of his asthma, doctors decided he should go to Brenner’s Children Hospital in Winston-Salem as a precaution.

C.J. and Nicole stayed at the hospital overnight. By the next morning, his lungs were clear, and he was back home on Father’s Day afternoon. He wore a neck brace for a time, and his chest hurt for about three days from all the compressions Jackson had done.

Today, he’s back to normal.

Needless to say, Nothstine reports, she and Cross have had many more requests for CPR training since word spread of Jackson’s and C.J.’s story. Nicole Dickerson says she tells everyone she sees, hoping it will prompt them to take a CPR course.

Jackson recalled the feeling he had while doing the CPR. 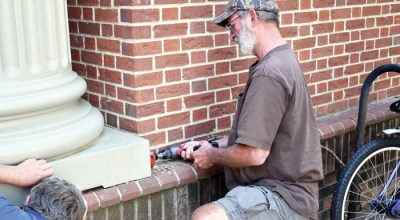