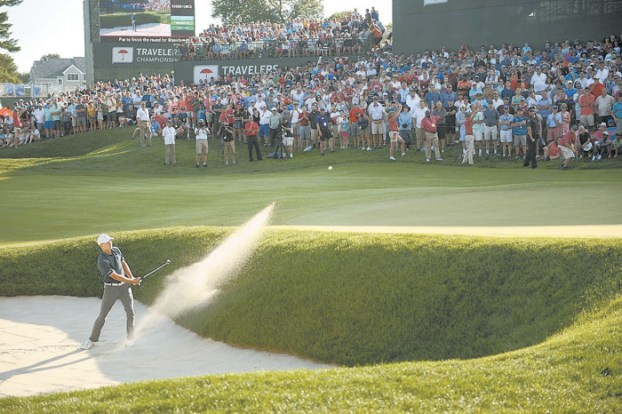 Jordan Spieth holed his bunker shot on the 18th green for a birdie and win over Daniel Berger during the final round of the 2017 Travelers Championship golf tournament Sunday, June 25, 2017, in Cromwell, Conn. (John Woike/Hartford Courant via AP)

Travelers had atmosphere the US Open lacked

A sure sign that the USGA needs to take a closer look at how it sets up the U.S. Open is when it draws comparisons with the Travelers Championship a week later.

Only this has nothing to do with the scoring.

To suggest that TPC River Highlands at 1,000 yards shorter was a tougher test than Erin Hills is to ignore that the U.S. Open played as a par 72 for the first time in 25 years. Golf is about the lowest score, not the lowest score to par. Jordan Spieth won the Travelers after finishing at 268. Brooks Koepka won a U.S. Open in soft conditions and moderate wind at 272.

It’s not about the finish, either.

Spieth, as popular as any player today, holed a 60-foot bunker shot in a playoff to beat Daniel Berger. Those moments are rare, even for Spieth. They hardly ever happen in a major, perhaps because there are only four majors a year. And even then, it usually involves only a putter (Phil Mickelson at Augusta, Payne Stewart at Pinehurst).

What the Travelers Championship had was noise.

“I mean, the ground was shaking it was so loud,” Spieth said. “What a tremendous last four holes, finishing holes, where you can get the crowd super involved with an amphitheater setting. If I were a fan, I would pick this tournament.”

He also mentioned the Phoenix Open, and the list would have grown had he had more time to think, such as Muirfield Village or TPC Sawgrass.

The U.S. Open had 652 acres of Wisconsin pasture.

It also had an outstanding golf course in Erin Hills that didn’t play to full strength when the wind didn’t fully cooperate until Sunday. Part of its appeal, however, was the size of its property. Major championships are the biggest shows in golf and need space. They attract more corporate interest and more fans from outside the local market than the Travelers Championship or the Honda Classic.

But the value of atmosphere should not be overlooked. A big atmosphere comes from energized, enthusiastic fans. And those fans get their energy from being close to the action, feeding off the noise around them. That starts with being able to see golf without having to squint their eyes.

The lack of major atmosphere was evident at Erin Hills.

It was even worse at Chambers Bay, the public course built out of a sand and gravel pit next to the Puget Sound. On one hole, fans were perched high on a ridge and looked like a row of figurines from down below. The par-5 eighth hole at Chambers Bay didn’t have any fans at all.

That’s the biggest risk the USGA is taking by going to big, new courses.

Years ago while playing a U.S. Open course a few months ahead of the championship, a USGA executive whose role was enhancing the fan and corporate experience was talking about ways to bring them closer to the action. Mike Davis, the USGA’s executive director, was more interested in the competition, and his decisions were geared toward creating space for the players.

Davis was winning the majority of those battles.

He had plenty of room at Erin Hills. But at what cost?

What makes Augusta National so appealing are the roars from every corner of the golf course, particularly when they rise up the hill from Amen Corner. PGA Championship venues put fans on top of the action, particularly at Valhalla and Baltusrol and Hazeltine.

The U.S. Women’s Open at Lancaster Country Club in Pennsylvania attracted record crowds on a golf course where the noise was contagious. It was such a roaring success that Lancaster is lobbying for a Solheim Cup.

The LPGA Tour’s biggest event on the calendar is the Solheim Cup, and this year in Iowa it should be as loud and vibrant as any.

That wasn’t the case four years ago. The LPGA Tour, when Carolyn Bivens was the commissioner, decided to take its showcase event to Colorado Golf Club, just south of Denver. The golf course, designed by Bill Coore and Ben Crenshaw, was ideal for the highest level of golf. But for the Solheim Cup, it was a bad choice. The property was enormous. The holes were spread out, and so was the gallery. The crowd appeared smaller than it was, and much quieter.

The Americans needed all the help they could get that week, but it wasn’t coming from a diluted gallery.

The Travelers Championship also had the advantage of its strongest field. Then again, it traditionally has great crowd support. And being close to the action gives the fans reason to return, and tell a friend.

The U.S. Open returns to traditional courses with a smaller blueprint over the next decade. Even after a soft, calm year, it should not lose its reputation as the toughest test in golf.

But setting up the courses involves more than the length of the rough, width of the fairways and speed of the green.

It also includes where to put the ropes.