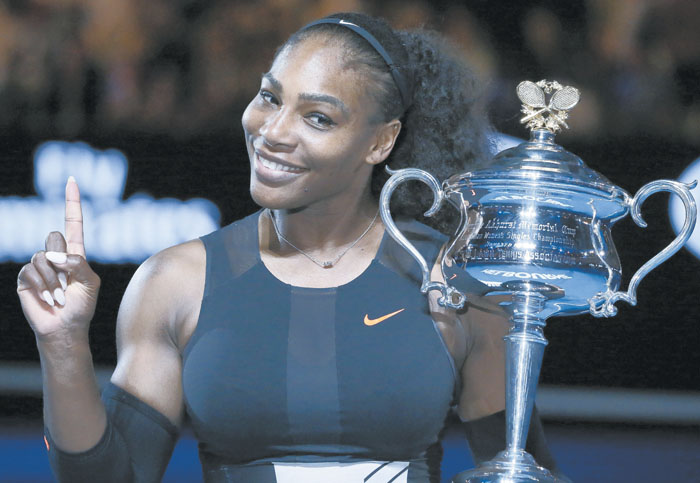 FILE - In this Jan. 28, 2017, file photo, Serena Williams holds up a finger and her trophy after defeating her sister, Venus, in the women's singles final at the Australian Open tennis championships in Melbourne, Australia. Williams posed nude for the cover of Vanity Fair in an image released by the magazine on June 27, 2017. (AP Photo/Aaron Favila, File)

NEW YORK (AP) — Serena Williams is showing off her pregnancy with a nude photo on the cover of the August issue of Vanity Fair.

The tennis superstar is seen in profile with her right arm covering her breasts and her pregnant stomach prominently on display. The magazine unveiled the cover Tuesday.

Serena announced her pregnancy with Reddit co-founder Alexis Olhanian in April. The magazine reports the couple will be married in the fall after the baby is born. Williams tells the magazine she “did a double take” and her heart “dropped” when she saw a positive test because it came just before the Australian Open, which she ended up winning.

Williams was lauded over the weekend by former tennis star John McEnroe as the greatest female tennis player, “no question.” When asked on NPR how she would rank on the men’s tour, McEnroe said “like 700.” On Tuesday, McEnroe was asked on “CBS This Morning” if he wanted to apologize and said “no.”