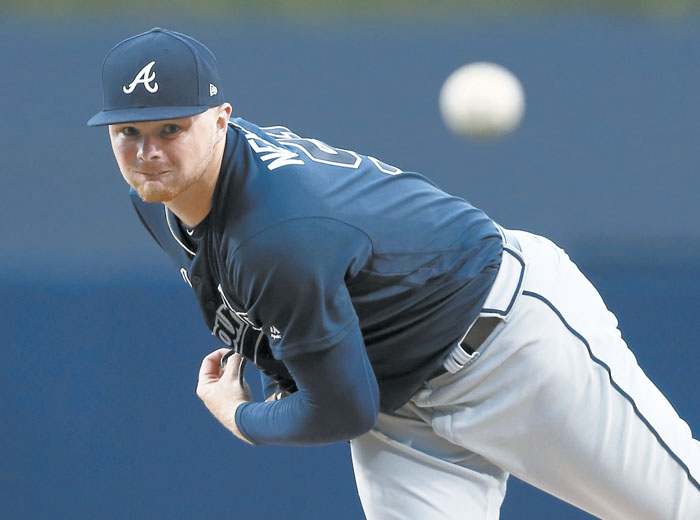 SAN DIEGO (AP) — Sean Newcomb struck out eight over six innings for his first major league victory, lifting the Atlanta Braves over the San Diego Padres 3-0 on Tuesday night.
Atlanta has won eight of 10. Johan Camargo had a two-run double off the left field wall in the fourth to begin the scoring, and Atlanta added an unearned run in the eighth.
Newcomb (1-2) made his major league debut June 10 and has a 1.48 ERA through four starts.
He issued one walk Tuesday and allowed six hits. The 24-year-old left-hander was a touted minor leaguer when Atlanta acquired him from the Los Angeles Angels in 2015 for Gold Glove shortstop Andrelton Simmons.
Padres starter Jhoulys Chacin (6-7) retired his final 10 batters, working seven innings for the third time in the past four starts.
Newcomb overmatched the Padres with a 94-mph fastball and effective sliders and curves, cruising into the sixth having thrown only 72 pitches. When Jose Pirela blooped a leadoff double, the rookie pitcher responded by striking out the lineup’s Nos. 3 and 4 hitters, Wil Myers and Hunter Renfroe, after falling behind each 3-1.
Newcomb completed the escape by striking out Erick Aybar following an eight-pitch walk to Cory Spangenberg.
Jason Motte maintained the 2-0 lead after Newcomb issued a leadoff walk in the seventh. Jose Ramirez threw a scoreless eighth. Jim Johnson struck out three in the ninth for his 16th save.
Ender Inciarte scored Atlanta’s third run on a sacrifice fly, by Nick Markakis.
HOMER DENIED
Myers eased into his home run trot between first and second base in the first inning, only to end up with a double when his 400-foot drive to right-center bounced back on the field. It went for a double, confirmed by a review.
TRAINER’S ROOM
Braves: RHP Bartolo Colon is expected to return from a back injury and start Wednesday’s game in San Diego.
Padres: RHP Trevor Cahill, sidelined since mid-May by a shoulder injury, is to start Wednesday for Triple-A El Paso. … CF Manuel Margot returned to the lineup after a calf injury sidelined him for over a month.
UP NEXT
Braves: Colon (2-7, 7.78 ERA) has allowed 11 home runs and a .332 batting average over 59 innings, but against the Padres on April 16, the 44-year-old allowed one run in seven innings.
Padres: RHP Luis Perdomo (2-4, 4.56) has held opponents to a .197 batting average with runners in scoring position this year.
___
More AP baseball: https://apnews.com/tag/MLBbaseball

Tebow hits St. Lucie, the next step of his…